Oct. 13, 2016 - It hasn’t always been an easy road for Kevin Sexton. The sawmill owner has battled with the government over harvesting rights and seen part of his operation ravaged by fire in the past three years, all while trying to make progress during the slow lumber market recovery in Atlantic Canada. 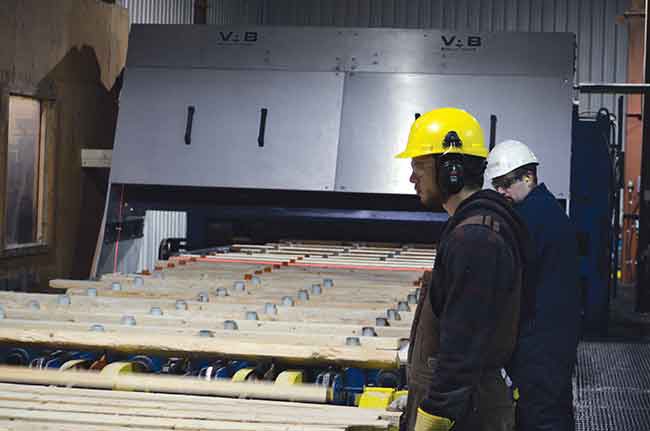 A transverse optimizer produced by VAB Solutions is helping Newfoundland’s Sexton Lumber save money It hasn’t always been an easy road for Kevin Sexton.

On the cool April morning I arrived at the operation, nestled in the Newfoundland countryside two-and-a-half hours northwest of St. John’s, logging crews were scrambling to return to the forest after days of precipitation had made runny mud of logging roads, making them unable to withstand vehicle traffic (60 per cent of the wood sawn by Sexton Lumber is harvested by the company).

But the booming personality that is Kevin Sexton, the man at the helm of all of the Sexton Lumber operations, was excitedly pacing around the building, keeping up with all of the operational needs while still chatting with me about the latest buzz of the Canadian forest industry and his beautiful new wheels, a 2015 Dodge Challenger Hellcat.

Soon enough we transitioned from the industry as a whole to Kevin’s own corner of Canadian forestry, a mill that continues to thrive despite the series of stumbling blocks.

Positive results
On this day, Sexton and mill manager Mike Butt were eager to discuss the successes resulting from the company’s latest investment; the first transverse optimizer produced by VAB Solutions.

Six years earlier, Sexton had implemented his first optimization solution from VAB, installing a linear planer optimizer in the company’s rebuilt planer mill. A few years after its installation, the planer optimizer had lived up to its expectations, all the more reason to again turn to VAB for a trimming solution.

Just a few months past the November 2015 installation of the new system, Sexton had plenty positive to say about his most recent upgrade.

“With the old system, we were averaging 280-282 board feet of lumber per cubic metre. With the new system, that has jumped us up almost 10 board feet, which at the end of the day, means a lot of extra lumber and a lot of new revenue for the year that was just going to chips before.”

Butt explained that the differences with the new system were that the thickness was much better, and that the lumber had a really good geometrical shape on it.  The company provides a claim that the transverse optimizer provides a “thickness accuracy of +/- 0.005 in.” The mill team had already performed several tests with the calibration bars and the system was deemed to be that accurate based on the results received so far.

Higher quality
That improved accuracy is the main reason for the install of the new technology, but as Butt explained, it certainly hasn’t turned out to be the only one.

“Before this, the fences would just pull the material and just trim off what was necessary to make the grade,” Sexton explains. “But now, it’s not trimming off the good wood at the end. It will pull it back and leave the best piece in the center.”

He noted several other points about what has made the transverse optimizer such an important piece for the quality of the lumber being produced on the line, including the better quality of the geometrical shape of the lumber, as well as the cosmetic feature on the system. One laser versus a laser every inch, which was the case on the old system, means less diagnostics and maintenance for the new unit.

The new transverse optimizer has also solved an issue with vibration, one that did not allow for the smoothest possible transition through the system.

The value already found through an increase in board feet and a higher quality piece of lumber has already guaranteed Sexton the return on investment he had hoped for with the installation of the transverse optimizer. But he explained that the real savings could be found as a result of what the transverse optimizer could mean for his edging system.

The company does not have an optimized edger in place at the mill, as the cost of installing a new system with all-new scanning optimization is an expensive proposal.

“But the future we have now with the VAB, we don’t need a new optimizer to turn our edger into an optimized edger,” Sexton says. “The guys have already given us a proposal to optimize our edger using the existing optimizer.”

Using the VAB system in place, any board sent back to the edger from the trimmer optimizer will be tracked, allowing the edger to know what needs to be done to the board.

By tracking that board through communication with the edger, thus eliminating the need for a separate edger optimizer, the potential savings for Sexton would be in the hundreds of thousands of dollars.

“When we initially put in the transverse optimizer, this wasn’t the reason for the install,” Sexton says. “We were just focused on the better recovery from the trimmer. Once we signed on with VAB to get this built we all thought, why can’t we turn this into an edger optimizer as well? So VAB did a little research on it and came back to us and said that they could absolutely do that.”

The finger-jointing plant provides a new base of products for the mill, as well as new options for recovering quality lumber that does not meet traditional size requirements.

The finger-jointing plant provides the opportunity to have both a positive impact on lumber recovery and the company’s bottom line. Installation of the line is underway already, with the system expected to be up and running later this year.

which is funding new projects. The mill installed the VAB system in November 2015.

Next steps
With the transverse optimizer providing opportunities to produce higher quality lumber for his customers, Sexton says that his next project will be to tighten up the HewSaw lines to take quality one step further.

“Every 32nd that we can reduce our target size by, at the end of the year, is thousands of dollars in recovery,” Sexton explains. “It might be as simple as a 2×4 that, today, when it goes through the planer, would only make a stud-grade piece of 2×4. With another 16th of good wood on it, it would probably bring the grade up to a No. 2 or better. So it may not mean that we get an extra piece of lumber, but if it brings the grade of the lumber up, that’s a lot of money at the end of the year.”

With a series of recent strategic investments already paying dividends, Kevin Sexton and his team at Sexton Lumber have reason to be excited about the new road ahead.

Smart chipping
It’s a 500-kilometre journey that lies ahead for wood chips coming from the Sexton Lumber sawline, but it’s a journey that still make sense compared to other options for the leftover fibre.

The chips and bark are trucked across the province to CornerBrook Pulp and Paper, Newfoundland’s lone remaining pulp and paper facility.

The chips and bark are dried from a moisture content of approximately 50 per cent to 17-18 per cent moisture before being shipped to CornerBrook. The system at Sexton incorporates a system of Morbark chip conveyors to push the chips through the Rodrigue Metal dust collector and Schutte-Buffalo hammermill before being dried in the Concept Air chip dryer.

The chips then make the journey to CornerBrook via the TransCanada Highway, with a handful of loads making the trek every week.