S­­­eizing the opportunity could be Claude Paquet’s motto. The self-made businessman has a real knack for being in the right place at the right time. Combine that with an entrepreneurial spirit and a love of anything to do with wood products, and you have a recipe for success. 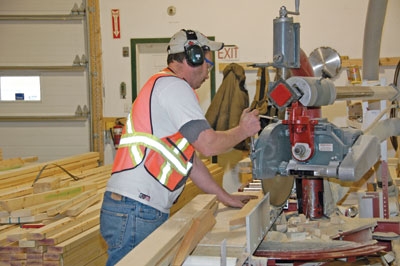 John Fitzpatrick on the radial arm saw. Much of the work is manual S­­­eizing the opportunity could be Claude Paquet’s motto. The self-made businessman has a real knack for being in the right place at the right time. Combine th

Paquet, who is a transplanted Quebecois from Albertville, moved west more than 35 years ago and started Clan Logging in Quesnel, BC. Last year, he harvested close to 250,000 cubic metres of timber for the Canfor dimension mill in Quesnel. But for the past five years, he has also been in the production side of the forest industry, as the owner of Cariboo Truss Ltd.

“I bought a large shop and office building here in Quesnel for our logging company, and at the time there was an existing truss company in part of the building as a tenant,” explains Paquet. “I was going to have them stay in the building and lease the space from us, but they had another truss operation in Kamloops, BC, and decided to consolidate both operations at the Kamloops location. They offered to sell me the Quesnel truss business and I saw it as a really good value added opportunity, so I decided to give it a try.”

That was in 2001, and Paquet and his staff have since built the truss business up substantially through what he says was a tremendous amount of hard work from everyone involved, and a commitment to producing products that are becoming recognized in the industry for high quality. But it’s not just Cariboo Truss’ customers who see it that way. In 2005, the company was awarded a quality award from the Western Wood Truss Association.

“We have hired some exceptional people and we stand behind all of our work,” he says. “That is now paying off for us, and we are seeing a lot of repeat business and customers that come to us because of our reputation. When we started out, we were consuming about 500,000 bdft of lumber in our production. Now we use three times that.”

More than Trusses
Although trusses are the company’s bread and butter, they also produce floor beams, I-Beams and laminated veneer lumber (LVL) beams. Everything they do is custom work. “The biggest truss we can make right now is about 60 ft. in length,” says Hector MacLean-Angus, who manages the plant and also handles design and estimating. “Our press is a limiting factor for height. Anything over 12.5 ft. in height has to be done in two sections and piggy-backed.” 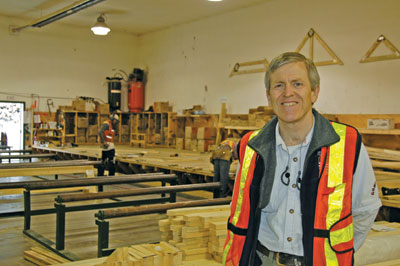 MacLean-Angus, who is Paquet’s right hand man at the plant and handles the day to day running of the operation while Claude concentrates on Clan Logging, came into the truss business quite unexpectedly.

He has lived in Quesnel for 17 years, and until five years ago, he was driving a school bus. “I had wanted to do something different for quite some time, and then I had a small heart attack,” he explains. “I took that as my cue that it was time for a change, and while I was recovering, I took the Industrial Engineering Technology program at the Southern Alberta Institute of Technology.”

After graduating from the two-year program, MacLean-Angus worked briefly in Kelowna, BC, as an inspector in a steel fabrication plant. “I was laid off from the job in Kelowna, and then this opportunity came up after I returned to Quesnel,” he adds. With MacLean-Angus at the helm and an increasing level of business, the truss plant staff has grown to 10 people. The plant usually runs one shift, five days per week, but MacLean-Angus says it runs overtime or additional shifts when needed. 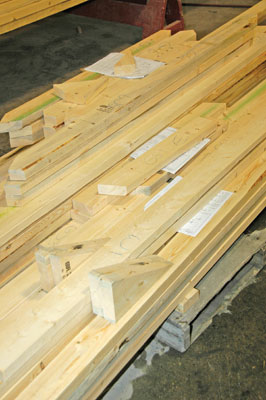 Production at the 8,000-square-foot plant is all custom. Cariboo Truss keeps an inventory of machine stress rated (MSR) lumber, which it sources through a lumber broker. It uses primarily 2×4, 2×6, and 2×8 lumber in lengths ranging from 10 to 18 feet. Although MacLean-Angus says the company does not need to use MSR lumber to meet building code requirements, he says staff feel it is worthwhile to absorb the slight premium they have to pay. “For the sake of quality and consistency we use MSR in all our trusses,” he explains.

The other main product the Cariboo Truss crew uses is specialized connector plates, which are galvanized steel plates that are positioned at every place where two or more pieces of lumber in a truss configuration meet. The plates are supplied by Jager Metal Products in Surrey, BC, a former Temlam division sold in May 2006 to MiTek Canada of Toronto, who also provide Cariboo Truss with a technical software program called Online Plus. Jager is the only Canadian distributor of the software, which is from Tampa, FL-based Robbins Engineering, and is used in truss design.

Custom Orders
When an order comes in, it is accompanied by building plans. From these plans or blueprints, a price is calculated. On the com-puter, the designer makes a wall layout and truss layout from plans, so that he knows where the structural supports are, critical for the design of the truss system. Once everything is laid out and the individual truss design is completed, the software determines a materials list, how the lumber needs to be cut (length and angle), where the steel plates need to be positioned, and how they are oriented. Before production starts, the truss designs are sent to Jager where they are checked and approved by an engineer.

Once all of the truss members are cut, they are grouped and moved to an assembly table. From the plans, workers at the table lay out the first truss using a jig so that they can repeat the exact layout for all of the trusses in the set. Once everything is laid out, they attach the steel plates to one side of the truss. The truss is then flipped over and the plates are applied to the other side. Once this process is complete, the truss is put through a press that ensures the plates hold the truss together. The finished trusses are then stacked before being loaded onto a truck for shipment to the job site.

Quality is monitored throughout the process with extra attention paid to the joints. All plates have to be placed accurately and flush with the surface of the lumber. Gaps at the joints in the lumber have to be smaller than specific standards.

“All training is done on the job with the most critical part of the assembly process being the plate placement, joint closure and alignment of the lumber,” notes MacLean-Angus. “It sounds complicated, but it really isn’t and we use drawings and physical examples to show our crew how much tolerance they have. We find this ‘hands on’ training works the best, and if someone does make a mistake, we will fix it together so that they learn from it.”

For the most part, markets for Cariboo Truss’ products stretch from Prince George to the north of Quesnel and Williams Lake to the south, but MacLean-Angus says they have also shipped trusses to Tatla Lake, which is on the road to the coastal community of Bella Coola and as far as Slave Lake, AB, to the east. “We see more business going towards Prince George just because it is a larger centre, but there’s a lot of small towns around with building going on and they need trusses. The business is growing quickly right now, and although we advertise, most of our new business comes through word of mouth.”

To keep the business growing, Paquet will be reinvesting in the plant later this year, and although the plans are not finalized yet, some of the production will be automated. “Claude is looking at a technological upgrade so that we can increase production while keeping the same number of employees,” MacLean-Angus says. “One of the best things about this company is that we have a very good crew and we want to keep everyone working. By increasing the production volume we should be able to accomplish that.”

As always, if there is an opportunity to seize, Claude Paquet will go for it.