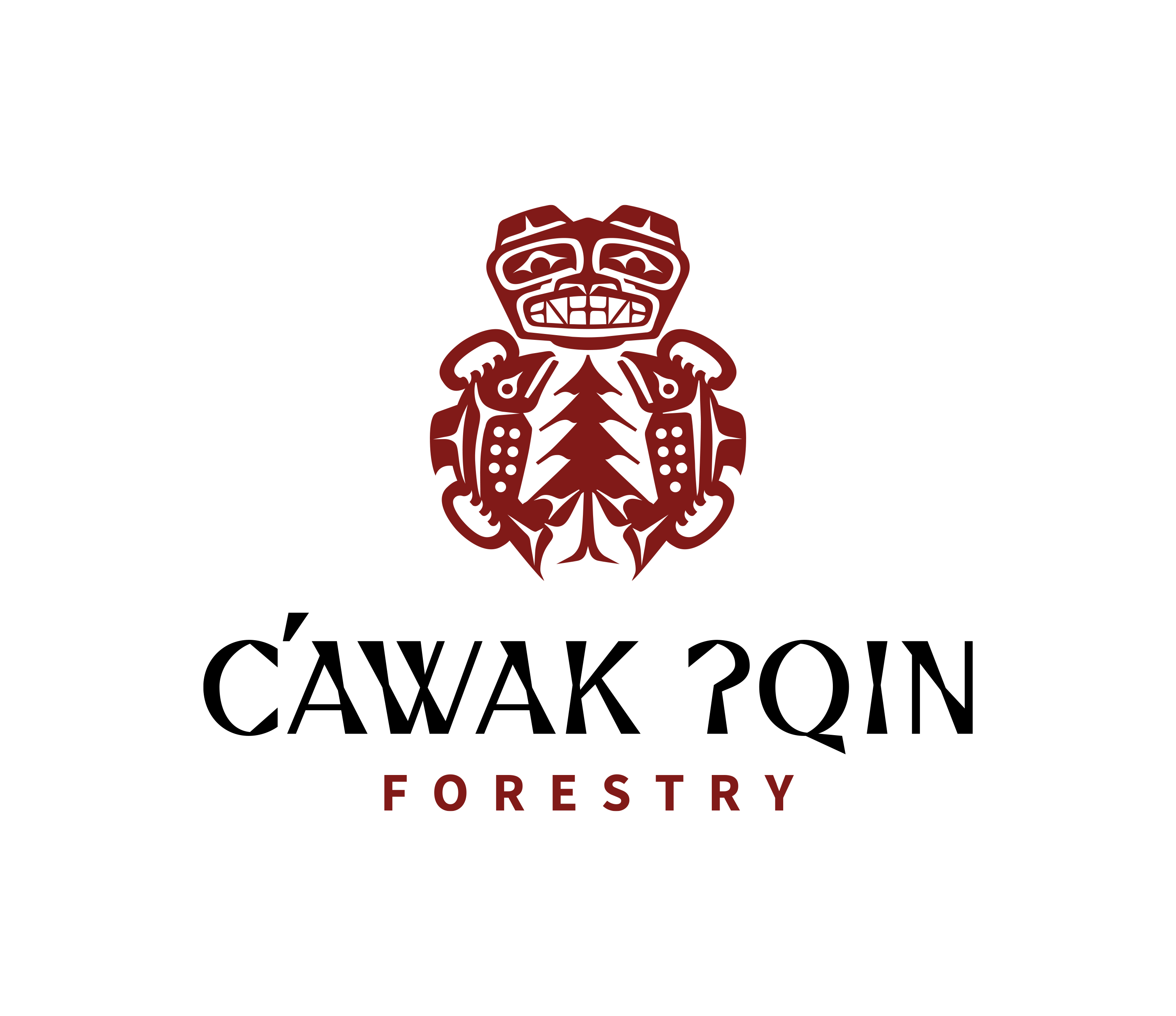 The path forward for C̕awak ʔqin Forestry is now set, with the unveiling of a new logo and brand that symbolizes the shared vision and values between Huu-ay-aht First Nations and Western Forest Products in Tree Farm Licence 44 (TFL 44) on Vancouver Island.

C̕awak ʔqin (pronounced sa-wa-kin) Forestry, which means ‘we are one’ in the Nuu-chah-nulth language, shared the new logo and brand as part of an official operations sign unveiling event at its Franklin River Road office near Port Alberni. The logo was designed by Huu-ay-aht father and son artists, Ed Johnson Sr. and Edward R. Johnson, who is also a Huu-ay-aht councillor. The logo depicts a bear with its four claws digging into two fish and a growing tree in the centre of the design.

“The salmon is the giver of life and the eagle gave the bear his claws so he could catch the fish that he was coaxing up into the woods,” explained Ed Johnson Sr. “The fish carcasses feed the plants and the trees to help them grow.”

“The design speaks to nature’s lifecycle with all the animals working together to protect, nourish and sustain our lands,” said Edward R. Johnson. “It also reflects the company’s vision as a world leading, Indigenous values-driven company, where our collective decisions benefit the waters, people, fisheries, wildlife and lands today and for future generations.”

“Since time immemorial, storytelling has held an important role in the history, culture and learnings of Huu-ay-aht. It reaffirms what we believe in, what we stand for and passes on the teachings from one generation to the next,” said Robert J. Dennis Sr., Huu-ay-aht chief councillor, who was instrumental in the creation of the ground-breaking partnership with Western. “Branding is no different; it’s a modern word for the communication of who we are: we are C̕awak ʔqin, we are one, and the new signage tells all visitors to the TFL that the partners and workers are united in their commitment to manage these forests sustainably according to our Nations’ sacred principles.”

Last October, Huu-ay-aht and Western announced that TFL 44 Limited Partnership had changed its name to C̕awak ʔqin Forestry (also known by its anglicized legal name of Tsawak-qin Forestry Limited Partnership). Since then, feedback was gathered from Huu-ay-aht and Western employees, community leaders, government officials, contractors and suppliers to create the company’s vision, values, branding and design.

“It was clear from these conversations that we all share a common goal: to create a strong and sustainable business where everyone and everything benefits, and where the future is secure,” said Shannon Janzen, board chair for C̕awak ʔqin Forestry and vice-president, partnerships and chief forester of Western. “There was complete alignment that we can only accomplish this by acting as one: C̕awak ʔqin. It is heartening to see the name change in this symbolic sign and sharing the understanding of what this means.”

“This isn’t just a brand; it is a commitment we make to our partners, our employees, the Nation’s citizens and the community at large. It’s about how we show up and what we stand for and a commitment to move forward when everyone is informed and involved,” added Doug Meske, senior manager, strategic partnerships, who also oversees the C̕awak ʔqin Forestry operations.

Over the coming days and weeks, the new brand signage will go up across forestry operations in the TFL.