Twenty years ago, logging contractors could run successful operations without keeping particularly close tabs on their cost and production statistics.  Back-of-the-envelope calculations and year-end assessments of the size of the bank account were often adequate to ensure the business was on track. 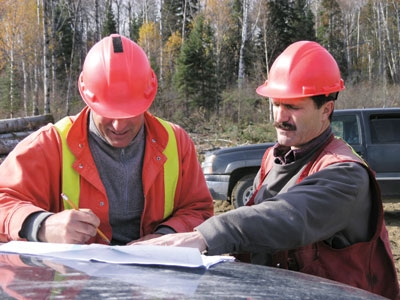 Those days are gone. More and more logging contractors – large and small – are realizing that effective use of a com-puter in their office is as critical as effective use of a feller buncher on a logging site. Contractors who can monitor production and costs on a timely, accurate basis are the ones who will still be in business five years from now.

Kelly King from West Pine Contractors of Quesnel, BC, figured out the importance of keeping track of hours and production information on his logging operation years ago.  Kelly’s operation is a stump to truck operation that produces about 200,000 m3 annually.

For many years, Kelly kept up with his machine hours and harvest volumes in basic spreadsheets. Three years ago, he adopted Caribou Software’s Logger’s Edge software to streamline and automate the task.

The program is a Windows-based database application designed specifically for the logging industry. According to Kelly, “A logger with a multi-phase operation would be crazy not to have some method for tracking his production and costs in this day and age, whether it is computerized or not. This just makes it so much easier than when we tried to track the information through spreadsheets.”

Kelly relies on The Logger’s Edge to compare his phase-by-phase costs per cubic metre across all the blocks he has harvested in a season.  He also uses the data from the software to compare how his overall costs per phase for the season compared to those same costs from a year ago.

Michele Nadeau, Kelly’s right-arm office person, handles the day-to-day data entry for the Logger’s Edge.  She likes the system because it keeps all her time sheet, load ticket, and rate information neatly organized in one system. “If I have to look for something, I don’t have to dig through a bunch of boxes.  I just open up the program, and look it up,” says Michele.

That, of course, is one of the benefits of storing time slip, load slip, and block information all in one database:  it acts as an electronic file cabinet, providing users with the ability to perform quick “queries” to look up information by date range, block, ticket number, equipment, or any number of variables.

Another benefit of a database system is the ready access it provides to key business information.  The week that Kelly was interviewed for this article, the benefits of such ready access were fresh in his mind: “We just finished a block this week.  Right away, I can see the machine hours I had on that block, by phase. I can also see how many cubic metres per hour we harvested in each phase, and relate it to an hourly rate to let me know whether I made or lost money.”

Eastern Variables
While a substantial part of Caribou Software’s client base is in Western Canada, Nighthawk Timber out of Timmins, ON, has found Caribou’s system to be quite flexible in terms of handling business practices that are common back east. They have also found the software to be readily scalable to handle the large and growing volume of information they must track. Dave Stringer, co-owner of Nighthawk, acknowledges that it would be virtually impossible to run an operation his size – over 200,000 m3 a year – without some type of database system to keep track of all his production and rate information.

Years ago, Nighthawk built an in-house system to manage the time sheets and load ticket information.  As their business grew and evolved, however, it became more costly to maintain their in-house system.  They eventually found Caribou Software two years ago, after trying another off-the-shelf system that did not fully suit their needs.

According to Dave, Caribou’s system is virtually trouble-free and has made the company’s record keeping much more accurate. Nighthawk spends less time double-checking their work relative to their old systems.

The company’s bookkeepers, Lori Martin and Monique Morin, both find the system to be user friendly and dependable, and have been pleased with the way it has streamlined much of their office work. As an example, when fuel prices increased so dramatically two years ago, Monique found herself performing tedious and time-consuming calculations to determine the fuel adjustments that needed to be passed on from the mills to her trucking contractors. Caribou worked with Nighthawk to build a routine that streamlined Monique’s tedious calculations. According to Monique, that one function alone saves her a few hours each month.

Nighthawk also finds that they are spending less time re-handling certain types of information. For example, they do a fair amount of hourly work, especially during the summer months. They used to enter their time sheets into one system, and then re-handle those same sheets to calculate the hourly charge-outs.  Now, they simply enter the time sheets into The Logger’s Edge once, they set up their employee pay rates, as well as the equipment charge-out rates, and the software generates the corresponding reports needed for both payroll and invoicing automatically.

While large companies like Nighthawk Timber find a data tracking software system to be an indispensable part of their business, smaller companies can also reap significant benefits. Just ask Jason Schuurman, of J.D. Schuurman Contracting Inc. Based out of Neerlandia, AB, the company harvests about 65,000 m3 annually, and is responsible for the load and haul for another 15,000 m3 on top of his harvesting base.

Prior to finding Caribou Software, Jason contemplated putting together an elaborate spreadsheet system to record and report his business information. When he heard about Caribou Software, based in Hinton, AB, he decided to give their system a try, rather than spending countless hours devising something on his own.

“It looked exactly like what I needed, and I was able to use it on a 60-day trial basis to ensure that it would suit my business needs.”  Once Jason used it to process his information for a two-week pay period, he could see that it was, in fact, well suited for his needs.  He now relies upon it to automate his trucker payments and to keep up on all his machine hours and corresponding costs for each block.

The investment was well worth it for Jason. Had originally intended to hire a part-time bookkeeper to help keep up with the office record keeping. Instead, he spent roughly $3,000 on the software, and kept up with the records himself.

For Jason, the key to making the software work without an office assistant to run it is that he stays on top of his data entry.  In fact, he has found that keeping the time sheet and load entry up to date has bigger advantages than simply making payday smoother. He can actually monitor his production information, his cycle times, and his truck earnings weekly – or even daily if he wants, and make adjustments to his operations if necessary.  Such information is indispensable for managing an efficient and profitable business.

There are many factors affecting business that loggers cannot control, but there are still plenty of things about the way business is run that can still be controlled. A key starting point is having a good data tracking system in place to monitor productivity and profitability. As Kelly King from West Pine puts it, a good tracking system helps you see what you’re doing wrong, and what you’re doing right. Then at least you can focus on doing more of the right things.

Teresa Hannah is with Caribou Software and lives in the natural beauty of Hinton, AB, gateway to Jasper.
She wrote this article specifically for CFI Magazine. She can be reached at 780-865-4110; teresa.hannah@caribousoftware.com.