Dan O’Brien and Bid Right Contracting have diversified business to prepare for the upswing ahead. 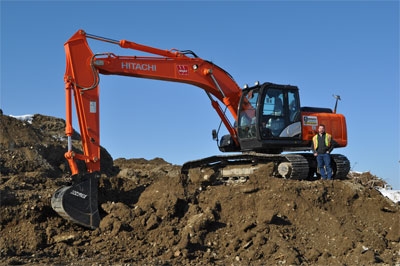 Dan O’Brien launched O’Brien Training in 2005 and offers courses for forestry and construction operators using equipment such as a Hitachi 210. Dan O’Brien and Bid Right Contracting have diversified business to prepare for the upswing ahead.

It’s an old truism that newcomers to a profession can wind up making the biggest splash, unencumbered as they are by politics or a preoccupation with protocol.

Such is the case with Prince George, B.C., resident Dan O’Brien. He jumped into the logging field as a teenager in 1992 by creating Bid Right Contracting Ltd., armed solely with an excavator and the burning ambition to secure work.

Today at 38, O’Brien presides over a crew of about 40 people and an inventory of over 50 machines, including Caterpillar and Hitachi (as well as other brands) and Western Star log trucks. Thus outfitted, his crew harvest as much as 375,000 cubic metres of wood annually in two Quesnel locations, making him the biggest contractor for West Fraser in Quesnel and one of the busiest contractors in the region.

Training for the Future
But that’s only the beginning of the Dan O’Brien success story. Realizing that a labour crunch was coming and that comprehensive training in various forestry practices would be vital in making newcomers “work ready,” he launched O’Brien Training Ltd. in 2005 – and the service “has taken off like the proverbial rocket,” he says. “Initially I provided accredited training in forestry construction and compliance, but today we also provide Class 1, 3 and 4 driver training to over 200 people annually, and we’ve just launched pipeline training for people wanting to get into the oil and gas sector.”

Pausing to reflect on the runaway success of his training programs, O’Brien sees an irony in his pursuit of grooming new talent. “Here I am training newcomers who then go to work for other employers, and meanwhile Bid Right is short of people!” He admits, however, that he snapped up five graduates last year.

O’Brien could also use more people on the training side. “My schools are frequently booked four to six weeks in advance, and I’d love nothing better than to double my current pool of four.” One instructor can teach up to five students per group and in addition, O’Brien Training employs several contract trainers for compliance courses it teaches.

Workaholic
O’Brien doesn’t volunteer much information about his personal life – not because he’s secretive, but simply because work occupies most of his time. “I’m not even sure what time off means anymore,” he says, laughing good-naturedly. “My days are divided evenly, between taking care of business at my office in Prince George and checking out my logging sites in Quesnel. I’m at the sites at least twice a week.”

O’Brien’s career trajectory began shortly after he graduated high school. “I started in the silviculture sector and worked mainly for the Ministry of Forests, doing piling and mounding for a couple of licensees.”

Eventually O’Brien gravitated into contract logging private wood and bidding on B.C. Timber Sales volumes. “I tried a lot of things early on, purely out of curiosity,” he says. “For example, in 1998 I bought a tree planter. It was a great machine, a beautiful piece of European technology, but I quickly learned that it was way ahead of its time in Western Canada.”

Reconsidering his words, O’Brien adds, “To be truthful, there were also all kinds of things about tree planting I didn’t know.”

The pivotal point for Bid Right came in 1998, when it began bunching and processing for Canfor Corp. in the Fraser Valley.

“That led to me doing mechanical harvesting for Canfor on Vancouver Island, for its Englewood Logging Division,” O’Brien says. More work for the majors cropped up, including International Forest Product operations in Hope and on the Sechelt Peninsula. “On top of this I had continuous stump-to-dump operations back in Prince George,” he says.

Acquisitions factor heavily in Bid Right’s expansion. The first company O’Brien bought was Quadra Logging Ltd. of Quesnel, and shortly after that, in 2006, he acquired an evergreen licence with West Fraser in Quesnel and logged about 160,000 cubic metres a year. In 2009 he purchased a licence for approximately 160,000 cubic metres a year for Canfor in Mackenzie: “We logged that for two years, and then an opportunity to purchase Mack Brothers Logging Company, another renewable contract for West Fraser in Quesnel.”

Today, this operation (located near the Wells Barkerville district) accounts for nearly 200,000 cubic metres of timber harvesting annually. “We also have a small wood operation west of Quesnel that accounts for about 170,000 cubic metres, also for West Fraser,” says O’Brien. This operation is supported by Bid Right’s own logging camp, opened in the fall of 2012. “Then there’s roadbuilding on both sites: my crews build about 70 kilometres of new logging roads yearly.” For the record, most of the wood harvested is beetle-killed lodgepole pine.

When discussing his equipment inventory, O’Brien says he doesn’t favour one manufacturer over another or have special fondness for any single machine. “Frankly, at this stage it’s hard to keep track of what we have,” he says, laughing. “My processors are Cats and Hitachis, and I also use Hitachi log loaders. John Deere and Tigercat bunchers have proven to be very reliable, and the Madill log loaders – the 2850s – are extremely good in the field. All of my log trucks are Western Star.” This inventory was most recently augmented by a couple of new processors in the last year as well as two new bunchers; moving the equipment to wherever it’s needed is accomplished by the company’s own lowbeds.

Driving Success
If O’Brien is vague when cataloguing his logging equipment inventory, it could be because his training companies occupy so much of his time. The motivation to create O’Brien Training came about when O’Brien was logging for the Engelwood division and taught operators how to properly handle feller bunchers and processors (equipment that’s common in the B.C. interior but unfamiliar to many coastal crews). “After O’Brien Training took off, I decided to buy Taylor Professional Driving in Prince George, because the truck component seemed to round everything off,” he says. “Today, we’re one of the few schools in B.C. that offer low-bed training in addition to log truck training.” The school has also expanded, with divisions in Fort St. John and work west of Prince George.

O’Brien’s motivation to delve into the training field is simple. “For the past 25 years no parent has ever said to their kid, `Go become a logger or trucker.’ Instead they were encouraged to go to university, and now we have a whole bunch of educated people running around, half of whom never got to work in the careers of their choosing. Meantime, in our sector we have a 25-year gap of talent. The average log truck driver in B.C. is 56 years old, and some of them are in their mid-70s.”

O’Brien goes on to remark, “I have clients whose machines are sitting idle because they can’t find operators, even though some truckers make $600 per day. Meanwhile, mills are coming back on stream, and other resource industries are booming, meaning there will be even more work opportunities in the foreseeable future. So the training schools are just my way of trying to help fill the generation gap of talent.”

Launching O’Brien Training took a full year. “But the wait was worth it,” says O’Brien. “We’re a Safe Certified company with the B.C. Forest Safety Council and registered with the Industry Training Authority, and we have a range of training, compliance and certification courses necessary for people to become workplace ready. Courses last between one week and five weeks, and we can put custom courses together, depending on the client. Additionally, we have an affiliation with the Central Interior Logging Association, with whom we stage ‘First Logger’ training programs that provide eligible applicants funding for their training and the opportunity for job placement.”

The instructor-to-student ratio for forestry training is one to four, whereas for trucking it’s one to one. “We have three Class 1 trucks and run 15 pieces of equipment for the forestry/construction component,” says O’Brien. The courses are designed for novice and more skilled operators, and the equipment used includes butt ’n’ top loader dangle head processors, feller bunchers, grapple skidders and a forwarder. Many different construction machines are also used at the O’Brien Training site.

Although not inclined to spend much time pondering the future, O’Brien is looking forward to the recovery of the forest sector in B.C. “I think I’m doing my part to give other people a chance to take advantage of it,” he says. “As for Bid Right, we’re in good shape to satisfy the growing demand for fibre. It’s a good time to be logging.” He’s also not standing pat, with his newest adventure being O’Brien Equipment, a used equipment and parts dealership, which opened in February in Quesnel.