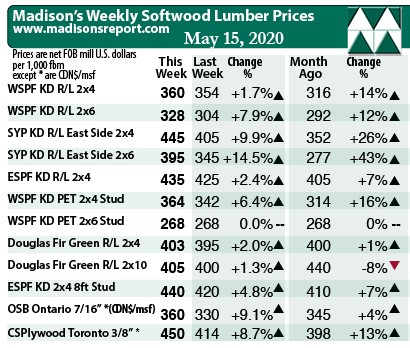 A lot of regular life activities remain unknown as various jurisdictions “open up” from the Covid-19 isolation and quarantine. Regardless, most North American construction framing dimension softwood lumber prices jumped once again last week on both continued healthy demand and uncertainty with supply.

Producers of Western Spruce-Pine-Fir commodities in the United States said bread and butter items again sold with aplomb, although all stock was moving briskly. Buyers came in volleys to shore up their depleted inventories; making peace with the fact that their shipments may not arrive for over a month in some cases, due to robust sawmill order files and often two week delays with rail shipments. For their part, WSPF sawmills in British Columbia reported another strong week of sales wherein any newly processed commodities were snapped up as soon as they became available. After a typically quiet Monday, sales activity ramped up continually until the end of last week.

Continuing to make large improvements from the lows of April, for the week ending May 15, 2020, Western SPF 2×4 price jumped +$6, or +2 per cent, compared to the previous week. Prices for this benchmark construction framing dimension softwood lumber item gained a whopping +$44, or +14 per cent from one month ago, when it was US$316 mfbm. Compared to mid-May 2019, this price is up +$28, or +8 per cent. 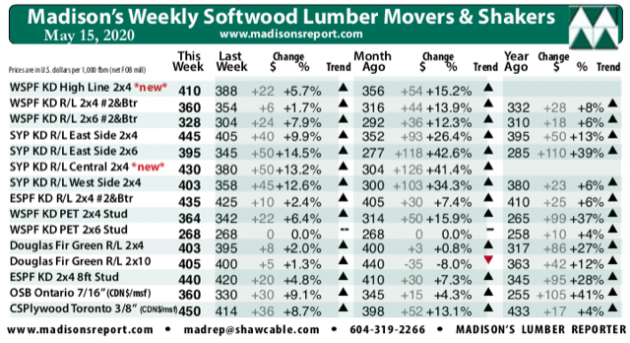 “Eastern Canadian producers kicked off last week with higher asking prices, sending buyers into a brief digestion-phase until midweek. On Wednesday the dam seemingly broke and a surge of demand issued forth as customers frantically tried to cover their short term needs.” — Madison’s Lumber Reporter

Softwood lumber stocking wholesalers at the docks in New Jersey reported the second week of May wasn’t much different from the first. They continued to lose money on most deals as vendors competed with each other for limited orders, while construction markets sputtered to life along the hard-hit Eastern Seaboard. Just as they had looked toward May for positivity during the benighted month of April, now everyone was hoping June will bring better tidings.

“Demand in both the West and the East was robust, as order files at sawmills stretched out and most prices advanced further.” — Madison’s Lumber Reporter