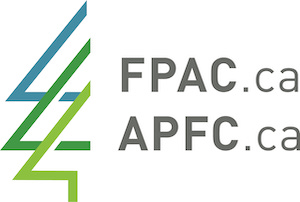 Earlier today, Forest Products Association of Canada (FPAC) issued the following statement to recognize Canada’s leadership role in joining over 100 other countries to sign the Glasgow Leaders’ Declaration on Forests and Land Use to end global deforestation:

Canada’s forest sector and its workers have long been committed to climate action. We are one of the few sectors that supported The Kyoto Protocol in the late 1990s, were among the first industrial groups in Canada in 2016 to announce an action plan to help meet Canada’s commitments under The Paris Agreement and will play a leading role in helping Canada advance climate action and secure a net-zero carbon economy by 2050.

FPAC recognizes the importance of the global pledge signed today to advance climate action, end global deforestation, and promote sustainable sourcing. Canada is well-positioned to be a leader in contributing to these international goals for two main reasons – our forestry laws and regulations, which are among the strictest in the world, and Canadian foresters’ commitment to keeping our forests as forests forever.

Canada has retained 90 per cent of its original forest cover and its national deforestation rate is among the lowest in the world – 0.01 per cent in 2018 – with the vast majority of this being from non-forestry resource industries, urban development, and agricultural lands development. The Declaration signed today also places a key focus on sustainable production and consumption, another critically important area in which Canada can offer leadership on the world stage.

While Canada is home to nine per cent of the world’s forests, it boasts 36 per cent of the world’s independent, third-party audited and certified forests – making us a global leader in forest certification and a respected market for ethical and sustainable sourcing of forest products. We are hopeful that today’s Declaration will support the expansion of forest certification to promote sustainably managed forests, encourage responsible consumption worldwide, and help advance our collective fight against climate change.