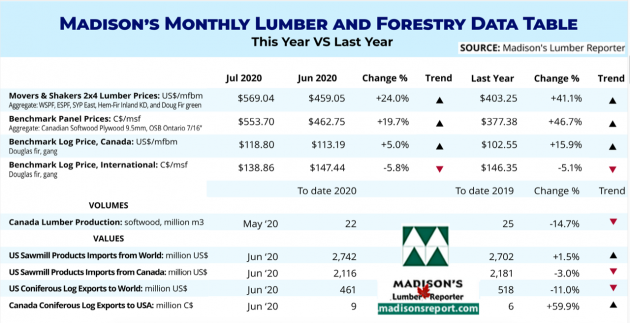 A large proportion of lumber produced in Canada goes into U.S. home building. Like lumber prices, housing construction in the U.S. underwent a significant stall in spring. And, like lumber prices, it is recovering steadily from severe lows:

U.S. sawmill production as per cent of practical capacity for January to May 2020 dropped slightly, down by -1 per cent, to 83 per cent, compared to 84 per cent in the first five months of 2019, said the latest issue of the Western Wood Products Association’s monthly Lumber Track.

Canadian sawmill production as per cent of practical capacity yet again dropped significantly in Jan – May 2020, at 73 per cent compared to the first five months of 2019 when it was 82 per cent.

In Canada softwood lumber production continued drastic drops, falling by another -15.9 per cent in the first five months of 2020, to 9,111 mfbm, compared to one-year-ago when it was 10,829 mfbm.

Since Madison’s Lumber Price data comes out weekly, but U.S. housing starts data is released monthly, there is always a lag between actual building activity and the U.S. Census Bureau data release.

However, during this unprecedented time of upheaval on multiple fronts, lumber prices are proving to be an excellent forward indicator of U.S. home building.