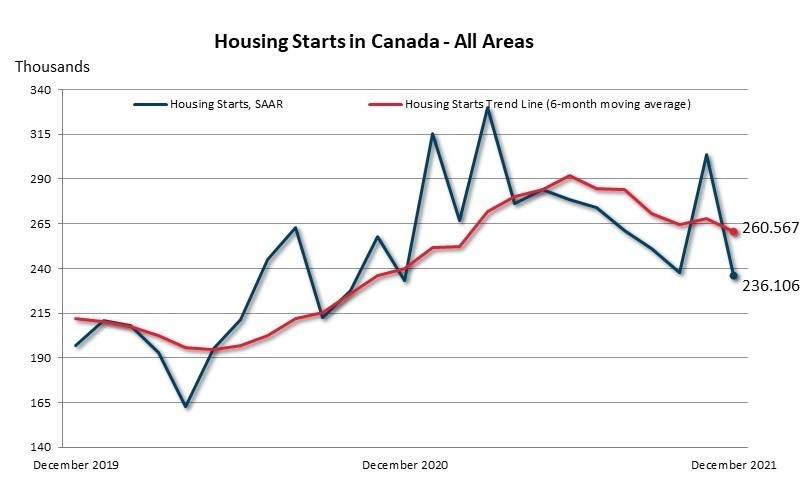 The trend in housing starts was 260,567 units in December, down from 267,606 units in November, according to Canada Mortgage and Housing Corporation (CMHC). This trend measure is a six-month moving average of the monthly seasonally adjusted annual rates (SAAR) of housing starts.

“The six-month trend in housing starts was lower from November to December, but remains at very high levels,” said Bob Dugan, CMHC’s chief economist. “For SAAR housing starts in Canada’s urban areas, both single-detached and multi-family starts decreased in December. On a positive note, actual urban housing starts were 21 per cent higher in 2021, adding much needed supply. The increase was driven by higher single-detached (28 per cent) and multi-family (19 per cent) starts and was mainly due to recovery following COVID-19 shutdown measures in 2020.”

On a trend and monthly SAAR basis, the level of housing starts activity in Canada remains high in historical terms. Among Vancouver, Toronto and Montreal, Vancouver was the only market to post growth in total SAAR starts in December, due to higher single-detached and multi-family starts.

Rural starts were estimated at a seasonally adjusted annual rate of 23,188 units.

Monthly Housing Starts and Other Construction Data  are accessible in English and French on our website and the CMHC Housing Market Information Portal. Housing starts data is available on the eleventh business day each month. We will release the January data on February 15 at 8:15 AM ET.