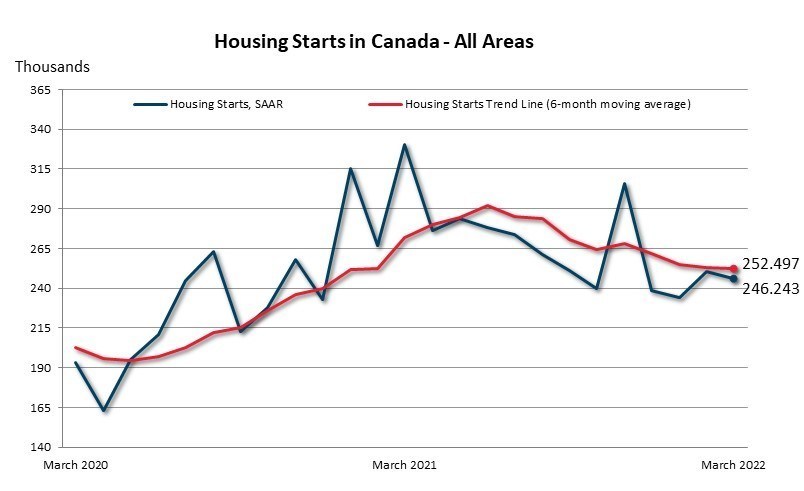 The trend in housing starts was 252,497 units in March, down from 253,296 units in February, according to Canada Mortgage and Housing Corporation (CMHC). This trend measure is a six-month moving average of the monthly seasonally adjusted annual rates (SAAR) of housing starts.

“On a trend and monthly SAAR basis, the level of housing starts activity in Canada remains historically high, hovering above 200,000 units since June 2020; however, the trend in housing starts posted a small decline from February to March,” said Bob Dugan, CMHC’s chief economist. “The decline in the monthly SAAR housing starts in Canada’s urban areas, was driven by lower multi-unit starts, which were partially offset by higher single-detached starts in March. Among Montreal, Toronto and Vancouver, Montreal was the only market to post growth in total SAAR starts, which was driven by higher multi-unit starts.”

Rural starts were estimated at a seasonally adjusted annual rate of 25,535 units.

Monthly Housing Starts and Other Construction Data are accessible in English and French on our website and the CMHC Housing Market Information Portal. Housing starts data is available on the eleventh business day each month. We will release the April data on May 16 at 8:15 AM ET.