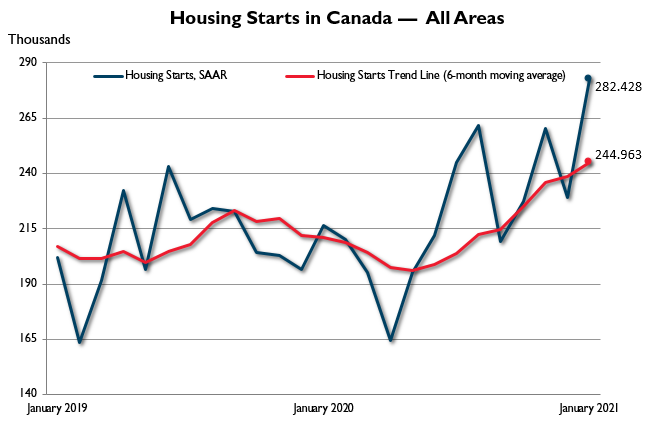 The trend in housing starts was 244,963 units in January 2021, up from 238,747 units in December 2020. This trend measure is a six-month moving average of the monthly seasonally adjusted annual rates (SAAR) of housing starts.

Due to COVID-19, CMHC’s monthly Starts and Completions Survey (SCS) for December 2020 was not conducted in the Kelowna CMA; it resumed in January 2021. This press release includes national housing starts totals without Kelowna in order to assess the impact of the COVID-19 pandemic where the SCS survey was conducted in both December 2020 and January 2021. The national trend and month-to-month change in the SAAR level was very similar with and without Kelowna in December and January. We will continue to monitor the situation in each centre and adjust the SCS accordingly.

Rural starts were estimated at a seasonally adjusted annual rate of 15,551 units (with and without Kelowna CMA).