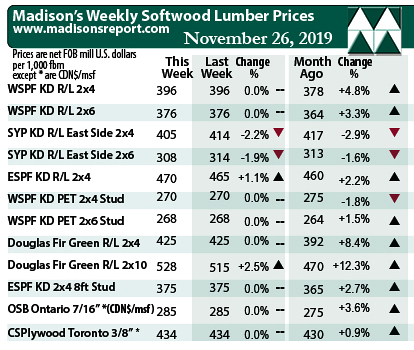 Thankfully the work stoppage on CN Rail ended — as of mid-day Tuesday — which was soon enough to avoid truly negative impact on Canada’s forest industry. After achieving dizzying highs in summer 2018, most standard construction framing dimension softwood lumber prices are now higher than last month and one year ago, while specialty lumber items remain lower than one year ago. For now at least.

Not unexpected at this time of year, another major sawmill curtailment, this time by Canfor, will take enough production offline into 2020 to keep lumber prices at least at current levels. From Madison’s Lumber Reporter’s contacts with North American softwood lumber wholesalers and traders last week, it is expected for most prices to remain around current levels. This is normal for this time of year because of the usual annual wind-down for lumber manufacturing. Sources indicate the supply-demand balance is quite even, with production at many facilities booked through the first week of December. Sawmill operators report log supplies well-stocked, not just for year-end but for production ramp-up in the first week of January.

Still flat from the previous week, the price of benchmark lumber commodity Western Spruce-Pine-Fir KD 2×4 #2&Btr was again last week U.S. $396 mfbm (net FOB sawmill; cash price, or “print”). Closing the gap compared to October, last week’s price is +$18, or +5%, more than it was one month ago. Compared to one year ago this price is up +$38 or +11%.

In western Canada, sawmill order files were into the weeks of Dec. 2 or Dec. 9, but actual shipping times were anyone’s guess due to potential transportation woes. — Madison’s Lumber Reporter

Traders of kiln-dried Douglas-fir dimension lumber and studs in the Pacific Northwest again reported last week demand, and sales activity, that outstripped the pace of spruce commodities. Almost no inventory remained for this week as producers got busy making sales. Douglas fir sawmills extended their order files into the second week of December or further. The watchword last week was rail, with both primary and secondary suppliers of kiln dried fir – indeed, all Hemlock/fir species – experiencing a barrage of orders from concerned customers who feared increasing delays with shipments to come.

The below table is a comparison of recent highs, in June 2018, and current Nov. 2019 benchmark dimension softwood lumber 2×4 prices compared to historical highs of 2004/05 and compared to recent lows of Sept. 2015: