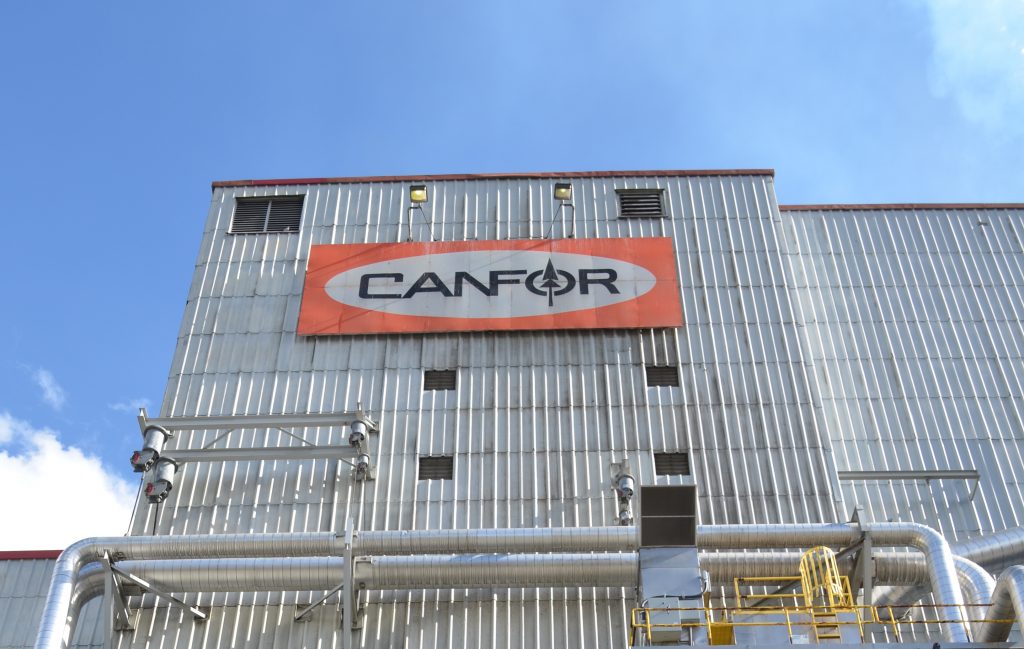 After adjusting for countervailing (CVD) and anti-dumping duties (ADD) of $50.7 million in the lumber segment and an inventory write-down recovery of $3.0 million for the pulp and paper segment, the company’s operating income was $347.3 million for the third quarter of 2020, up $289.2million from similarly adjusted operating income of $58.1 million in the second quarter of 2020.

Adjusted lumber segment results of $387.4 million, an all-time record, were up more than five-fold quarter-over-quarter, as a significant surge in demand outpaced available supply in the current quarter, following widespread industry curtailments earlier in the year in response to the coronavirus outbreak. As a result, North American benchmark lumber pricing jumped to unprecedented levels in the third quarter of 2020, resulting in record results for the company’s Southern Yellow Pine (SYP) and European Spruce/Pine/Fir (SPF) operations and a significant improvement in the results for the Company’s Western SPF operations.

The sharp rise in North American lumber demand saw U.S. housing starts peak at 1,487,000 units in July, posting a year-over-year gain of 23 per cent. Over the balance of the quarter, home construction activity remained strong, particularly for the single-family housing market (which consumes a higher proportion of lumber). For the third quarter of 2020, on a seasonally adjusted basis, U.S. housing starts averaged 1,430,000 units, up 33 per cent from the previous quarter, due to a significant uptick in both single and multi-family housing starts, and to a lesser extent, strength in the repair and remodeling sector driven by increased home centre demand. Canadian housing starts followed similar trends to the U.S., with August housing starts climbing to their highest levels since September 2007 (averaging 262,000 units) and third quarter of 2020 starts averaging 239,000 units, up 25 per cent from the second quarter of 2020.

Western Europe and Scandinavian lumber demand experienced further growth in the current quarter largely in response to the continued strength in the repair and remodelling sector. With most business in Europe conducted based on pricing negotiated quarterly in advance, pricing gains for the company’s European SPF business in the third quarter of 2020 did not keep pace with those in North America; however, prices are projected to show solid increases in the fourth quarter of 2020.

The North American Random Lengths Western SPF 2×4 #2&Btr price climbed considerably at the end of the prior quarter and continued its run up through the third quarter, reaching an all-time high of U.S. $955 per Mfbm early in September, before dropping in October as prices began to correct. The current quarter average North American Random Lengths Western SPF 2×4 #2&Btr price was U.S. $768 per Mfbm, up U.S. $411 per Mfbm, or 115 per cent, compared to the previous quarter. Conversely, offshore lumber prices experienced modest declines quarter-over-quarter, due in part to the nature of pricing, much of which is negotiated monthly or quarterly in advance. Overall, however, the company’s Western SPF average lumber unit sales realizations still saw substantial increases in the current quarter, with the unprecedented North American pricing levels significantly outweighing modest declines in offshore realizations, a timing lag in shipments (versus orders), and a three cent, or four per cent, stronger Canadian dollar in the current period.

The North American Random Lengths SYP East 2×4 #2 price rose for a record consecutive 24 weeks beginning in the second quarter and into the third quarter of 2020, reaching a high of U.S. $1,025 per Mfbm at the end of September, and a record of U.S. $1,035 per Mfbm early in October, before declining sharply in recent weeks. The company’s SYP lumber unit sales realizations were materially higher than the prior quarter, principally reflecting a U.S. $319 per Mfbm, or 69 per cent, increase in the average SYP East 2×4 #2 price to U.S. $782 per Mfbm, with similarly strong price gains seen for most wider width dimensions, offset to a small extent by a time lag in shipments (versus orders).

The company’s European SPF unit sales realizations were significantly higher quarter-over-quarter despite a more modest increase of five per cent in the average European indicative SPF lumber benchmark price to SEK 3,414. This was principally driven by a favourable geographic sales mix, combined with a five per cent weaker Canadian dollar (compared to the Swedish Krona (SEK)).

Total lumber shipments, at 1.37 billion board feet, were 19 per cent higher than the previous quarter, principally due to increased production.

Total lumber production, at 1.42 billion board feet ,was 36 per cent above the prior quarter primarily reflecting a return to more regular production rates following COVID-19 market-related curtailments across the company’s Western SPF and SYP operations early in the second quarter, offset in part by four weeks of seasonal production downtime at the company’s European SPF operations in July and August.

Lumber unit manufacturing and product costs improved slightly compared to the previous quarter, primarily reflecting a moderate improvement in unit costs at the company’s Western SPF and SYP operations, largely driven by improved productivity, combined with an ongoing focus on reducing spend. Unit manufacturing and product costs in the company’s European SPF operations experienced a modest increase quarter-over-quarter, principally as a result of the seasonal production downtime in the current quarter.

Notwithstanding the anticipated correction of lumber prices, some of which has been experienced in recent weeks, lumber market fundamentals are forecast to reflect continued solid demand with low levels of supply chain inventory persisting into early 2021. Prices are likely to remain strong in the fourth quarter of 2020, as demand remains elevated and supply slowly recovers following severe shortages in the field.

Commenting on the company’s third quarter results, Canfor’s president and chief executive officer Don Kayne, said, “We are extremely impressed with the exceptional efforts and relentless execution of our teams to ensure a safe work environment during these unprecedented times. While we were very pleased with the significant increase in global lumber pricing and the performance of our all our operations in the third quarter, we anticipate a moderation in prices through the fourth quarter. Although we forecast lumber demand to remain strong in 2021, we will continue to focus on strengthening our balance sheet to mitigate future potential volatility in global markets.”