The complex role that Canada’s forests play in the earth’s carbon balance should give even the most extreme environmentalists pause for thought. I say should, because first they’d have to approach the issue with intellectual honesty and an interest in the real issue of global warming. Often, however, public discussion has little to do with the emerging carbon balance debate, and everything to do with the decades-old debate over forest management.

The complex role that Canada’s forests play in the earth’s carbon balance should give even the most extreme environmentalists pause for thought. I say should

In a recent CanWest News Service article on global warming and the role played by Canada’s vast boreal forest, Susan Casey-Lefkowitz, director of the Natural Resources Defence Council’s Canada Program, told the reporter that “Canada’s boreal region is a life support system for the planet because of its key role in Carbon storage.” Not to be outdone, Tzeporah Berman of BC’s ForestEthics opined that the boreal is “to carbon what Fort Knox is to gold.”

Then like gold, the only way to protect this crucial carbon is to lock it away. Sure enough, the coalition these two groups belong to want at least 50% of Canada’s boreal preserved in the name of mitigating global warming.

Except it won’t. In fact, it might make things worse. Unlike gold, that most stable of elements, the boreal is a complex, changing, living environment whose relationship with the global climate is also complex and changing. Young forests act as better carbon sinks than older ones, while burning forests can turn the whole equation upside down. For example, according to Natural Resources Canada, our vast forests were actually net carbon emitters in 2005 thanks to a bad fire year. Lock the entire boreal up if you want, but not in the name of a better carbon balance.
Nor would such a decision be made in a vacuum. Even if we let 50% of the boreal age, rot, or burn, the global demand for building materials and paper products will not vanish. That wood will come from somewhere, or worse, be replaced by steel, aluminum, concrete, plastics, materials with far worse relationships to the carbon balance that Berman and others feign so much concern for.

Honest Balance
In simple terms, sustainable forest management and harvesting activities will result in local, short-term carbon losses but, unlike alternative building materials, that is just the beginning of the story. Wood products manufacturing also captures a great deal of carbon for decades or centuries, depending on the product and end use. The forest left behind will soon become an aggressive carbon sink again. Finally, much of the residuals (and now more and more even the harvest slash once left on site) will be used as a renewable energy alternative to fossil fuels. 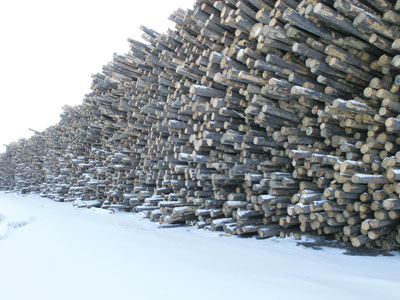 “If the ultimate goal is to reduce the amount of carbon being emitted into the atmosphere, then the impacts of harvesting should be considered in light of carbon emissions from other sectors of the economy whose products can be used in place of forest products. Most products that are substitutes for wood products, such as ­­­aluminum, steel, and cement, require more energy to produce and consequently their production involves greater greenhouse gas emissions…Reducing harvesting would not have a large impact on carbon dioxide emissions from Canada’s forests for several reasons…Less than 0.5% of the managed forest is harvested in any given year in Canada. These areas regenerate to forest, so that in any year there is substantial new storage of carbon occurring on the areas previously harvested. As well, much of the carbon removed from the forest is stored in durable forest products, like lumber. In addition, the amount of carbon released into the atmosphere from harvesting is small compared with the amount released due to forest fires and other natural disturbances like insect infestations. The area burned annually is, on average, 2.5 times larger than the area harvested; a big portion of the carbon goes up in smoke.”

In other words, shutting down the boreal forest will not mitigate global warming at all. But maybe that was never the real goal.

Related
SFI Continues to Grow
Is the War of the Woods Over?
A Great Story to Tell
Ontario Green