March 11, 2016 - When Edgewood Forest Products purchased its sawmill in Carrot River, Sask. from Weyerhaeuser and started to operate it in 2012, Edgewood’s mill owners and management quickly realized they needed a new home for its larger logs and improved lumber recovery.

Back in the days when Weyerhaeuser operated the mill, up until 2007, the company also owned a plywood plant in Hudson Bay, Sask. The plywood plant was the home for the majority of Weyerhaeuser’s larger logs. But since that plant was still shutdown when Edgewood took over the sawmill in Carrot River, the company quickly realized it would need to form a plan for its bigger wood.

“Without the plywood plant in operation at that time, it became very apparent that we needed a home for our bigger logs,” explains Byron Warner, manager for Edgewood Forest Products’ Carrot River sawmill. “There’s nobody in the province that wanted these big logs – although we do sell some to Manitoba – so that was the initial push, either get into plywood or upgrade the sawmill to accommodate the logs.”

Lumber recovery was another factor in the decision to invest in the sawmill.

“It was older technology we were operating,” Warner says. “There was no scanning, no optimization in the old mill. Whatever fell in the trough was the way we fed it through. We produced a lot of wood chips and our recovery wasn’t what we wanted it to be, so here we are today, improving.”

After years of planning and a $25 million investment in new equipment, the sawmill is upgraded and is now operating with a ton of new features, which has the mill’s management expecting a big uptick in annual production. The first log was pushed through in late January and production started back up on Feb. 15.

To accommodate the bigger logs, Edgewood purchased a used Nicholson debarker so they could process upwards of 21-inch logs; built a new Wellons dry kiln to accommodate the increased production (installed last winter); and teamed up with Linck to design the entire mill to be a single line with no returns or rework of any kind.

Linck oversaw and managed the upgrades and were the suppliers and installers of the majority of the new equipment, including two-sided chipper canters, log turners, profilers, horizontal and vertical saws, operator booth controls, safety fences, Springer-Microtec 2D and 3D scanners, a Metsutronic metal detector and more.

“It just goes down the line and goes to the sorter,” Warner says.

Before the upgrades, the mill was processing 350,000 cubic metres of logs with a total annual production of 75 to 80 million board feet.

Warner expects the upgrades to boost production at the sawmill substantially.

“We hope to get 100 million board feet, and possibly more,” he says.

That’s exciting news for the sawmill and its 100 employees working in a community of 1,100 residents.

Read all about the ins and outs of Edgewood Forest Products’ upgrades at its Carrot River sawmill and the installation processes in the upcoming May/June issue of Canadian Forest Industries. 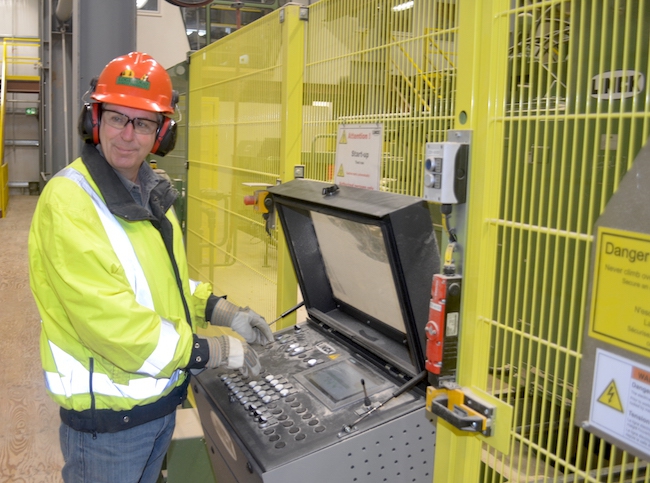