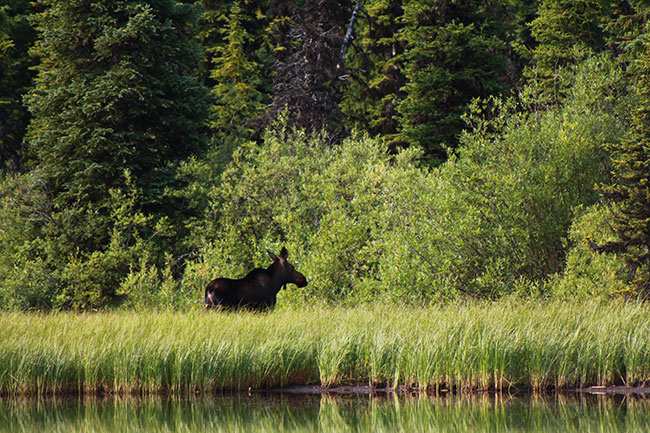 Let us consider the global context in which forest management certification was proposed and has grown. According to the Food and Agriculture Organization (FAO) of the United Nations, the total area of forest in the world is 4,033 million ha. The volume of industrial wood harvested in 2011 was 1,560 million cubic meters. Illegal logging and deforestation to create agricultural land in tropical forests was a serious problem.

Society was changing in the 1980s. People wanted real improvements in environmental management including the management of forests. There was a “War in the Woods” going on in parts of Canada that led to protests and boycotts of forest companies.

In October 1993 the Forest Stewardship Council (FSC), supported by the World Wildlife Fund, Greenpeace and other environmental non-governmental organizations (ENGOs) and social organizations, held its Founding Assembly in Toronto. Participants were given a description of the FSC proposal for the development of forest management standards and audit/certification services. Part of the three-day meeting focused on the constitution and governance of the new organization. Many recognized that it would not fly without representation from forest owners and managers. But the ENGOs and social organizations that supported the formation of the FSC held that only environmental and social stakeholders should control the FSC. There were to be no seats on the board for forest owners, public or private, or anyone with an economic interest in forest management. It was not until the 1996 FSC AGM in Oaxaca, Mexico that forest owners, managers and organizations with economic interests were given an equal voice on the board of directors.

During this period, the UN established eight intergovernmental processes to develop sets of criteria and indicators (C&I) for sustainable forest management (SFM) for each of the major forest/socio-economic regions of the world. C&I for temperate forests were developed by the Montreal and Helsinki processes, which covered 12 non-European countries with temperate forests. The Montreal process C&I was reviewed and refined for application in Canada by an expert committee working under the authority of the Canadian Council of Forest Ministers (CCFM). The Montreal process C&I and CCFM C&I for SFM form the foundation and structure for the SFM standards developed by the Sustainable Forestry Initiative (SFI) and the Canadian Standards Association (CSA) for application in Canada.

So, what is the purpose and benefits of SFM certification? First and foremost the SFM standards provide a set of management requirements and objectives that will bring forest management up to modern public expectations and ensure the conservation of wildlife habitat, biodiversity and water quality, as well as ensuring that all harvested areas are promptly regenerated. Forest management standards and certification have improved forest management and have become standard business practice for large timber producers, particularly those in the export market. Certification provides assurance to customers that the forest products they are buying come from well-managed forests.

At the same time, private forest owners associations in several European Union countries worked together to form the Pan-European Forest Certification Council (PEFC), which eventually grew into the international Program for the Endorsement of Forest Certification (PEFC).

In Canada, the forest industry asked the CSA to establish a multi-interest technical committee to develop an SFM standard based on the CCFM C&I for SFM. In the U.S., the framework for the SFI program was developed and forest products companies began to implement it in their operations. Several other countries established multi-interest technical committees to develop forest management standards following the 10 FSC principles or the C&I applicable to their forests. The environmental organizations that supported the FSC established Forest Products Buyers Groups in 14 European countries to stimulate market demand for products from forests certified by FSC.

CHART 1: Canada & US Forest Certification Statistics at end of 2018 (millions ha) (*ATFS is the American Tree Farm System which has a woodlot certification program endorsed by PEFC) Source: certificationcanada.org and PEFC, FSC reports.

Chart 2: International Forest Certification Statistics at end of 2018 (millions ha) *Certification without an endorsed standard is not considered to be good practice. Source: FSC and PEFC websites

25 years later
Here we are in 2019, 25 years from the founding of the FSC in 1993. Certification is recognized as good for forest management and for the marketplace. It is widely practiced. There are two international organizations that endorse SFM standards: the FSC and PEFC. At the end of 2018, the statistics provided by the two international SFM Certification programs show:

There are a significant number of forest areas that have been certified to both FSC and PEFC standards to satisfy customers with strong preferences for one program or the other. The total area of forest that has been certified, with duplication removed, is estimated by PEFC and FSC to be 431 million ha. It has taken 25 years to get there.

Canada-wide we have 164.5 million ha of forest certified, 38 per cent of the global total of 431 million ha. There are several contributing factors. Public ownership accounts for 170 million ha of our forest. The management units are very large, averaging about 700,000 ha in gross area. All management units are subject to strong provincial regulation and are managed by well-qualified forest professionals. In many cases provincial governments require that the managers gain certification to the program of their choice to provide public assurance of good management.

Three forest certification programs are used in Canada: CSA and SFI, both endorsed by PEFC, and several standards endorsed by FSC International.

Canada has a total of 388 million ha of forested land (about 10 per cent of global forests), 41 million ha of other wooded land (alpine and remote northern areas of sparsely forested land) and 347 million ha of closed canopy forest. About 210 million ha are considered to be non-reserved, economically accessible and timber productive. There are three categories of size and ownership:

Very little of the 20 million ha of private woodlots has been certified. The process of certification is quite expensive. Not all private woodlots are managed for timber production. Many are owned for recreational purposes. However, it should be noted that in early 2018 SFI launched the Canadian Small Scale Forest Management Module for Indigenous Peoples, Families and Communities. One year after the launch, two First Nations have achieved certification of their forest lands to this module. Other First Nations communities, as well as private woodlot management organizations, are considering certification.

One-hundred-seventy million ha of publicly owned forest are under active management and much of the five million ha of the private industrial forest land is actively managed for timber production and able to support the cost of certification. The total area likely to be certified in Canada is therefore about 175 million ha (see Chart 2).

The forest ownership situation in the U.S. is very different from Canada, with significantly more forest land in private ownership. Of the total forest area of 304 million ha, private forest land makes up 56 per cent, while state and federal forest land make up 44 per cent. 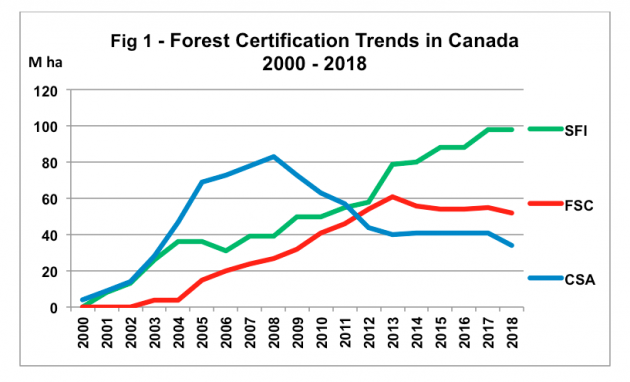 SFI has grown in market uptake across North America as it continues to evolve as a certification standard and is bolstered by investments in research, conservation collaboration and education, which advances knowledge and appreciation of the benefits from a sustainably managed forest. 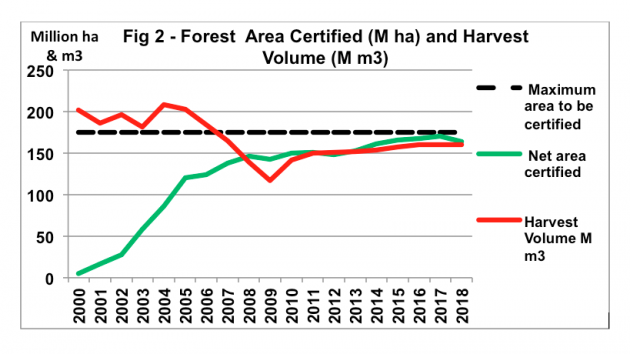 The slight reduction of net area certified in 2018 (see Chart 2) is probably due to the lingering effects of the 2007-2010 recession (the harvest fell to 117 million m3 in 2009) and the closure of 58 out of 141 pulp and paper mills across Canada. Several forest management areas are not under active management.

The global picture today
Forest certification is now practiced in 85 countries. It was first adopted in countries with temperate forests, particularly in countries active in the production and export of forest products. Certification has grown and spread to tropical countries to address the problems of illegal logging and deforestation.

The international marketplace is moving towards more sustainable products and energy sources. Certification of sources and supply chains will increasingly be applied to assure consumers that the sources of bioenergy, wood pellets, textiles and other products are indeed sustainable and renewable. The Marine Stewardship Council (ocean fisheries) and the ISO 14000 EMS are part of this movement.

Real progress is being made and it will continue.

Tony Rotherham (RPF B.C. and Ont. (ret’d)) has worked on woodlands operations in B.C., Ontario, Quebec, Kenya and Iran. He worked for the CPPA (now FPAC) in the Woodlands Section for 21 years and since then as a consultant, largely on private forest land policy.