July 10, 2017 - The Canadian Food Inspection Agency (CFIA) has confirmed the presence of Emerald Ash Borer in Quebec City. This finding was outside of the regulated area, which includes southwest Quebec, from Pontiac to Acton, and all of southern Ontario. 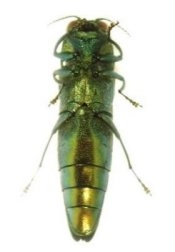 Effective immediately, the movement of all ash material such as logs, branches, and wood chips, and all species of firewood from the affected site, is restricted. The property owner in the affected area has been notified of these restrictions. The regulated area will be expanded by the end of 2017, after the CFIA completes its survey work.

Although the Emerald Ash Borer poses no threat to human health, it is highly destructive to ash trees. It has already killed millions of ash trees in Ontario, Quebec and the United States, and poses a major economic and environmental threat to urban and forested areas of North America. The CFIA continues to work with federal, provincial, and municipal governments to slow the spread of this pest.