The woods throughout the Thunder Bay region of northern Ontario are no strangers to the Macsemchuk family. For nearly half a century, three generations of Macsemchuks have relied on these forests for their livelihood, cutting trees to feed area sawmills and paper mills.

Tony Macsemchuk established the family logging business, Firesteel Contractors Limited, in the late 1960s in Kakabeka Falls, 30km west of Thunder Bay. His sons, Dan, Bruce and later Dave, followed in their father’s footsteps and soon joined him in the woods. Dan Macsemchuk took over the operation from his dad, before Bruce and his son Allen, the third generation of the family, took over a few years ago.

Formerly contracted to cut lumber for Buchanan Forest Products, Firesteel is now part of the Resolute Forest Products Woodlands Group, cutting a portion of RFP’s 5.28 million cubic metres of Crown land wood supply it currently is contracted for in Ontario. Firesteel provides cut-to-length 9ft. and 10ft. logs, as well as chips and micro-chips for RFP’s sawmill and paper mill in Thunder Bay.

The wood provided for the mills is a steady mix of pine, spruce, poplar and balsam from forests within an approximate 100km radius of the two mills. Firesteel’s staff of 35 produce 8-10 truckloads a day of saw logs, chips and micro-chips for the mill, cutting 120,000-160,000 cubic metres of wood per year working six days a week year-round.

Most logging operations would have some down time due to water restrictions, forest fire concerns, endangered species or ice melts, but that hasn’t been the case for the Firesteel crew in recent years.

“The last few years, we have been running all 12 months of the year,” says Allen. “We used to have a month off in the spring, but it is a 12-months-of-the-year operation as it goes right now. You sometimes get two or three weeks off because of break up, depending on the areas you get in to.”

This year has been particularly challenging to meet the volumes expected by RFP, according to Allen, as heavy rainfall has saturated the area. In Thunder Bay, spring and summer rainfall has been very heavy, with over 240mm of rain falling each season. Last year saw very similar precipitation levels, but both years have been incredibly high compared to regional norms.

“For us putting our road programs in place, getting roads built and getting ahead of the game, it has definitely become our biggest issue.”

“We have always done a little bit of our own roadbuilding in some of our blocks,” says Allen. “But because we know the kind of roads we need to get the wood out in the spring, and what has to be in place for our own operation to run, we are building our own roads to make sure it gets done right, and so they will be strong enough to get through the tough seasons.”

Bringing the full roadbuilding business into the fold at Firesteel has been one of the reasons why their company still exists despite being devastated by the downturn in the U.S. housing market in 2008. Firesteel took a significant hit when many of the sawmills in northern Ontario shut down, forcing them to re-think their staffing levels and their overall business operations.

“We did have a year or two where we downsized; we went down to about 15 employees at one point and we were only doing cut-to-length logging. But we have survived by branching out, diversifying our business and finding new avenues to travel like the acquisition of our micro-chipper for the co-gen and our stationary chipping plant.”

In the woods
The micro-chipping is a new element for the Firesteel business. Just over a year ago, the company purchased a Morbark 40/36 Advantage 3 Drum Micro-Chipper to diversify its product offerings to Resolute in Thunder Bay. Those micro-chips can be used in the co-gen facility at RFP, or could help to supply the pellet mill that is expected to come online at the end of 2014. Firesteel looked to Morbark for the micro-chipping operation after the success of the stationary chipping plant that it had purchased from Morbark several years earlier.

On the day that Canadian Forest Industries joined Macsemchuk in the forest, southwest of Kakabeka Falls, a Cat 545D skidder was hauling logs off of a steep hillside to the Morbark micro-chipper below, trudging through thick mud from two straight days of rain topped with the first frost of the season. The crew was using a Hitachi Zaxis 200LC excavator with a grapple attachment to feed the chipper, while an older model Caterpillar dozer helped move material around and flattened out some of the deeper ruts in the mud where needed.

The Caterpillar 545D skidder being used at this site was of particular interest. While not yet available in Canada, Allen was one of two Canadian loggers that was given the opportunity to work with Caterpillar on the design of the new machine.

Macsemchuk made three trips to Georgia to join a group of loggers from across Canada and the U.S. in providing input for the design of the new D series skidders, the 525, 535, 545, and 555. He was asked what he would like to see changed or modified to make a skidder that was more valuable for the type of logging operation he was running in northwestern Ontario. Macsemchuk admittedly was not operating Cat skidders at the time he was asked to be involved by one of his contacts at the Toromont branch in Thunder Bay, but wanted to take advantage of the chance to help design the new equipment.

The result has been a machine that has provided the pulling power, hydraulic power, wheel base and overall size to meet the demands of tough conditions caused by mud, rain, snow and ice. The power and size also helps in overcoming the challenges of the terrain, steep and rocky hillsides throughout the dense forests west and south of Thunder Bay. After several months of driving a demo unit of the 545D, Macsemchuk is so happy with how the skidder turned out that he plans to purchase one of his own.

Challenges ahead
With the forest industry rebounding in northwestern Ontario and adjustments made to his fleet to better battle the elements, Macsemchuk is able to spend a little bit of time looking ahead to the future of his business.

One of the concerns on the horizon is the impending development of the Ring of Fire resource area in Ontario. As plans for infrastructure begin to materialize, the attraction for workers to migrate to the mining side is high. Forestry operations are already having a difficult enough time luring young workers to the industry.

Thankfully, for Macsemchuk, he has developed a team with a strong, young core thanks to a decade of hires that primarily featured younger workers. But there are still concerns.

“We have had our fair share of issues (hiring younger guys) with mining being so strong and losing guys out west to the oilfields. But we’ve managed to find a couple of guys who want to stay home and be home every night.”

If the forest industry continues its steady growth in the region, it should allow Macsemchuk to continue to stabilize his business despite the changing conditions. 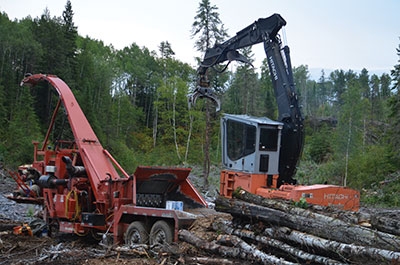 Firesteel purchased a micro-chipper to help diversify the forest products they could offer to the Resolute mill in Thunder Bay. The woods throughout the Thunder Bay region of northern Ontario are no strangers to the Macsemchuk family. For nearly half a century
Print this page