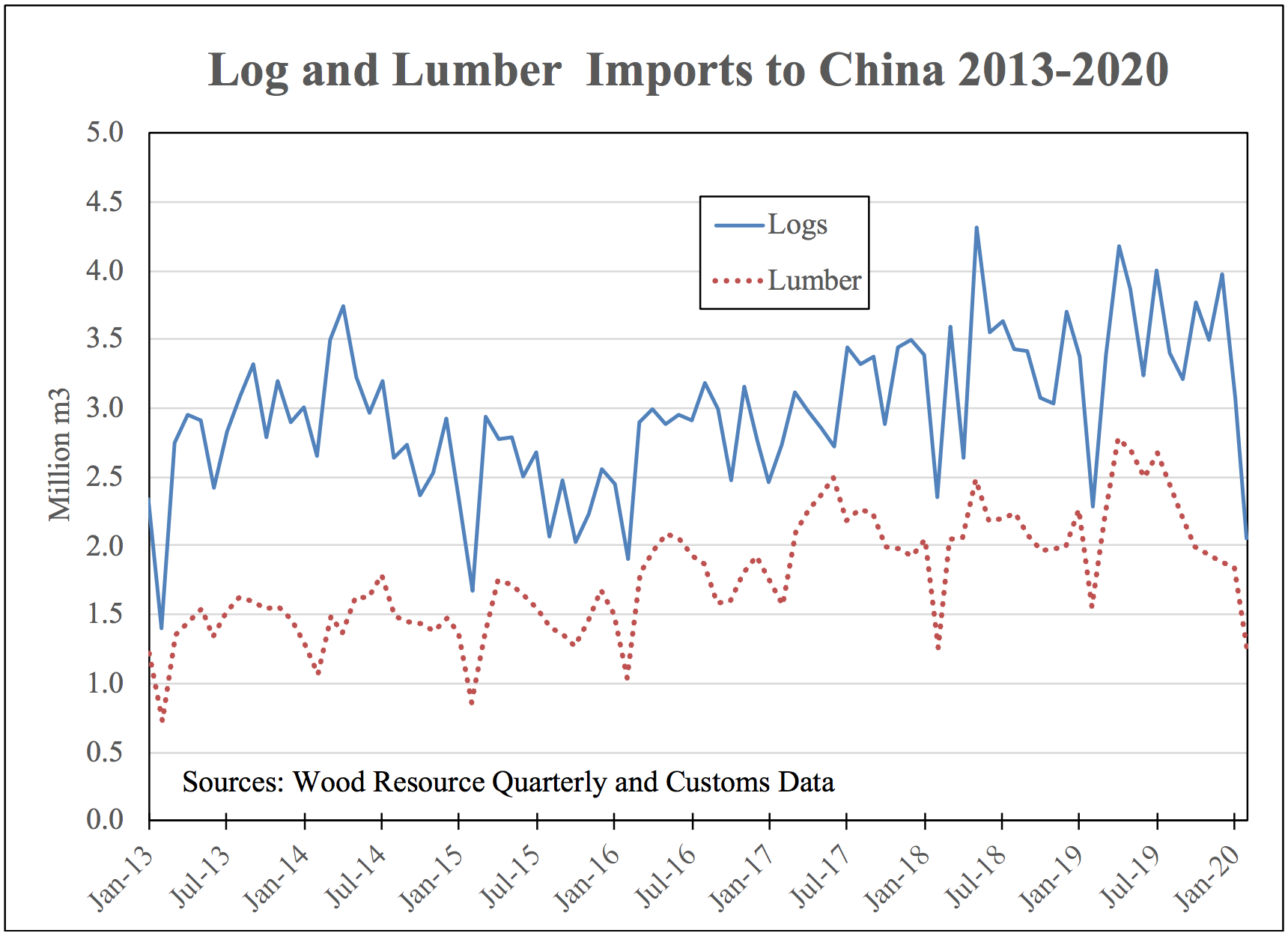 The value of imported forest products to China dropped by $750 million y-o-y during January and February 2020, with the biggest falls on the values of wood pulp and softwood lumber, reports the Wood Resource Quarterly

The coronavirus epidemic in China has resulted in sharply reduced importation of forest products in early 2020. During January and February, the import value of logs, lumber, pulp and wood chips totaled 4.6 billion dollars. This was down 26 per cent and 14 per cent respectively, from the same periods in 2018 and 2019, reports the Wood Resource Quarterly (WRQ). From 2019 to 2020, the biggest percentage declines were seen in softwood lumber (-26 per cent y-o-y) and softwood logs (-20 per cent y-o-y). The import value for wood pulp fell the most, just over $300 million y-o-y, followed by softwood lumber, which was down $190 million.

Importation of softwood lumber to China by volume, was estimated at 1.2 million m3 in February 2020, the lowest monthly volume in four years (see chart). The two largest lumber suppliers, Russia and Canada, continued to be the major sources for lumber. While Russian volumes were down 16 per cent during the first two months of 2020 y-o-y, they increased their market share from 57 per cent in early 2019 to 59 per cent in early 2020. Canada’s share fell substantially, from 24 per cent to 10 per cent during the same period. Another noteworthy change the past two years has been the expanded presence of lumber coming from Europe into the Chinese market, but in volumes and market share. European lumber accounted for about 18 per cent of total imports in early 2020, up from eight per cent in 2018.

During January and February 2020, China imported 5.1 million m3 of softwood logs, down from almost 5.7 million m3 in the same period in 2019 (the total import value fell from $800 million to 640 million dollars). Record high log inventories (over 7 million m3) at Chinese ports, reduced demand for forest products as a consequence of the coronavirus, and labour shortages at ports and wood processing facilities have resulted in sharp declines in log imports in 2020. All log-supplying countries reduced shipments dramatically with the exception of New Zealand (only down one per cent y-o-y) and Central Europe (Germany and the Czech Republic were up 200 per cent and 320 per cent y-o-y). Total import volumes to China in February 2020 were the lowest since February 2016.

The only major product that showed increases in import volume from early 2019 to early 2020 was hardwood chips, with a gain of 11 per cent y-o-y. This was driven by higher production of predominantly hygiene paper products in January and February, and the expectation that this sector would continue to be strong into the second quarter, reports the WRQ. Shipments from Vietnam and Chile jumped about 20 per cent y-o-y, while Australia shipped three per cent less the first two months of 2020 as compared to the same period in 2019.

The import volume of wood pulp increased by almost 20 per cent y-o-y during the first two months of 2020 with particular noteworthy rises in shipments from Indonesia, Canada, Finland and Sweden. However, the import value fell by 308 million dollars (-14 per cent y-o-y) as a result of substantially lower prices for market pulp in early 2020.

Interested in wood products market information from around the world? The Wood Resource Quarterly (WRQ) is a 56-page report, established in 1988 and has subscribers in over 30 countries. The report tracks prices for sawlog, pulpwood, lumber & pellets worldwide and reports on trade and wood market developments in most key regions around the world. For more insights on the latest international forest product market trends, please go to www.WoodPrices.com