June 9, 2017 - On a rainy April morning in B.C.’s Fraser Valley, I almost missed a chance to spend time with Dillon Lind, the son half of a father-son logging business, DLind Contracting, based in Chilliwack. 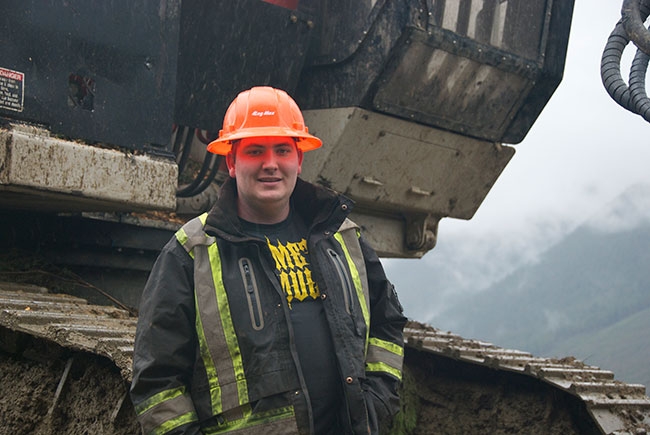 Dillon Lind is the son half of a father-son logging business On a rainy April morning in B.C.’s Fraser Valley

It wasn’t that Lind didn’t want to meet me, but he was down an operator and was making up for lost time by jumping in a Link-Belt 290 X2 processor. There was a job to do.

At 25 years old, Lind’s work ethic is admirable, if not uncommon.

“He’s got a good head on his shoulders,” says Rob Ravai, vice-president of wood supply and the Fraser Valley Operations for Teal-Jones Group, who employs DLind Contracting almost year round to cut timber blocks in the Fraser Valley. Ravai drove me up the muddy, winding logging road just outside of Mission specifically to meet Lind. He can spare an hour, Ravai assures me.

DLind is one of Teal-Jones Group’s long-term contractors. Lind’s father, Dave, started the company in 1988 in Kelowna, Lind tells me after climbing down from the Link-Belt for a rainy hillside chat. His father moved the business to the Fraser Valley more than 10 years ago.

“He was a sub then, and he did a bit of prime contractor work and then we went full phase,” Lind says. “I started right out of school, about seven or eight years ago. I started young. Logging goes back so many generations in our family so I was sort of born into it and have always had an interest in the machines.”

Lind now lives in Chilliwack and for the past few years has been increasing his leadership role in the logging business, moving from the cab to a desk. “The last year especially is when I really started getting involved in the business. I like it – it keeps me out of trouble,” he says, grinning.

Together he and his father manage three companies: DLind Contracting, and DLind Trucking and another small satellite company, Lind Forestry Services. “Between the three companies I think we have about 30 people,” Lind says. “We also have a log sort and a yarder side of the operations.”

Also within the last couple years, DLind began and maintained a steady contract with Teal-Jones Group to harvest in the Fraser Valley. Lind manages the Teal Jones contract while his father looks after the other operations in Fraser Valley. “We do a bit of timber sale work, but most of it is with Teal Jones,” Lind says.

The terrain near Mission consists of mainly Douglas fir, hemlock and cedar. Some of the old growth blocks include Cyprus as well. The average piece size coming out of those cuts is 0.5 to 0.8 cubic metres per log. Most of that fibre is headed to Teal-Jones Group’s area mills, which include the JS Jones Small Log mill and Stag Timber mill in Surrey, B.C., and the Salmon Arm cedar mill.

The cut near Mission was located close to the Norrish Creek water reservoir, part of the Lower Fraser watershed area. Due to proximity, DLind and licensee Teal-Jones Group have to be even more careful about where and what they log.

Steady on the slopes
When it comes to handling the coastal slopes, Lind says the most important decision is hiring the right operators. “That’s the hardest thing with steep slopes, you don’t want to put a guy up there that’s not experienced.”

As we chat, up on the hillside subcontractor Aaron Forman expertly hoe chucks in a brand-new Tigercat LS855D. With some assistance from DLind, Forman purchased the Tigercat last fall.

“He used to work as an employee for us but now he’s a fully independent contractor,” Lind says. “He’s also a big part of the operations, does a lot of supervising. He’s a valuable asset.”

Forman takes a quick break to explain to me how he handles the challenge of steep terrain, which begins with a steep slope assessment to determine if the grade is workable. “I look for the best way to do it productively while being safe. You not only have to look out for yourself but the guys who come next. I have lay it out somewhere that is safe for the next guy,” Forman says.

The machine is crucial to his work, he adds. The new Tigercat is designed for steep slopes so it features a levelling system to give the machine added stability, and ramped up undercarriage and traction system. Those features allow Forman to access the fibre faster, easier and safer, he says. Before he was using a machine that has a maximum capacity of 40 per cent slope.

Looking to the future, Lind says he’s considering the benefits of introducing a cable-assist system to his fleet. “The big thing is planning. It is a large investment,” he says.

Ravai agrees, adding that planning would involve a double-road system, which would create an upper road where the excavator with the winch assist would walk to move the buncher and hoe chucker. “The planning is really critical,” Ravai says. “We have to ensure we have the timber supply in front of us to make it worth the investment to support the cost to efficiently operate such specified equipment.”

Stable fleet
“Everything up here is new,” Lind says, motioning to all the machines around us. “We ramped up huge last year and the year before. It was planned because that’s the way the industry is going. You have to grow.”

Beyond the Tigercat hoe chucker and Link-Belt processor, DLind’s fleet in the Fraser Valley includes a Tigercat 630E skidder and a Tigercat 870 feller buncher with a 5702 cutting saw, as well as a Link-Belt 4040. All three of their processor heads are Log Max.

“The new machines are hugely important. That Tigercat has improved our production, it’s hard to say, but I’d guess 30 per cent or more,” Lind says. They also run a mini tower for yarding on select operations, but it’s much more expensive and labour intensive, Lind says, so any fibre that can be accessed by machine improves his margins.

“It’s faster and safer, too,” he says. “You’re in a protected machine, not walking around.” DLind Trucking also owns and runs four trucks and hires other contract trucks when necessary.

Secure work
The guaranteed work and large volume are important components of DLind’s relationship with Teal Jones, Lind says. The steady work has allowed him to hire several new operators and keep them all busy. The operators work between 10 to 12-hour shifts, with the skidder and processor running 10 and the hoe chucker and buncher running 12.

“It’s a benefit for us too because we have a good logger working for us at fair market value, we appreciate that,” Ravai adds. “It’s a good, productive safe company. There’s always some growing pains but that’s with any relationship.”

Going forward, Lind says he’s slowing buying shares of the company (the trucks already he owns) and his goal is to eventually take over fully from his dad.

“I used to run machines all the time but the last couple years I’ve been out of the operator seat for the most part, doing the business side of it. I do like that side, it breaks up the day, but it’s nice to get back into a machine,” he says, giving the side of his processor a gentle kick.

“You get to turn your brain off and cut some wood.”