Oct. 23, 2017 - Don Matthew has a lot on his plate. The 45-year-old is both a band councillor for Simpcw First Nation and the founder and owner of Chinook Cove Contracting – a successful timber harvesting, pipeline maintenance, mechanical site prep and road building company in B.C. On top of this, he’s a husband and a father of three. How does he do it? 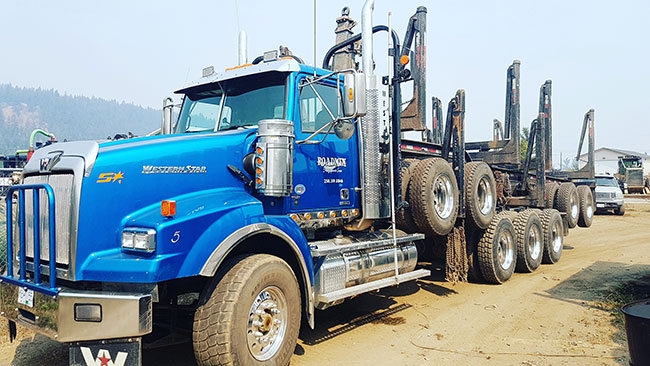 In addition to his logging and pipeline clearing business Don Matthew has a lot on his plate.

“I was raised by a single mom and saw how hard she worked for everything, so I try to live up to that,” Matthew says during our interview in Kamloops.

Chinook Cove Contracting had its start in 1998, a significant year for many First Nations people in Canada. “After the Delgamuukw decision I could see a swing where more opportunities were coming for First Nations peoples,” Matthew says. The Degamuukw decision was a ruling by the Supreme Court of Canada in December 1997 that set precedents in Canada on legal cases involving Aboriginal Title.

Matthew is a member of Simpcw First Nation, a division of the Secwepemc, or Shuswap Nation. The band’s territory covers about five million hectares of land from Barriere to north of McBride, B.C., and crossing into Alberta to encompass Jasper.

Matthew’s entrance into the forest sector in the late 90s began with him renting excavators to do mechanical site prep for forestry operations. He was able to get contracts through Forest Renewable British Columbia – a program set up by the province at the time as a way to direct backlog work to First Nations.

In 1998, Simpcw First Nation was awarded a licence for decadent (wood that meets a certain age criteria) cedar and hemlock. “Nobody wanted it, but I thought it would be a good first step to owning a forest licence,” Matthew says. He partnered in the logging venture with Mike Basanger, a non-native, whom he still considers a close friend and mentor.

“Mike and I started logging there and it was the toughest logging I’ve ever done in my life. You can go out and look at a cedar log and it looks gorgeous on the outside, and would be sound on the butt so we’d cut it at 57 feet, but when we get it in the mill and they buck it off at 20 feet it would have a four-inch shell,” he says. “It was really hard to read.”

After three or four years logging together, Matthew and Besanger parted ways. Chinook Cove had some equity so Matthew was able to buy his first machine: a 1990 Cat 200 excavator for site prep.

Not long after, Matthew purchased a John Deere 648E skidder and began doing site-prep as the main contractor for Tolko Industries in the area. His company also bought out a small-scale salvage operation, so Matthew was able to take on small two to three-hectare unhealthy forests, send in the skidder and excavators and hand fall any salvageable wood. At this point he had two other employees working under Chinook Cove Contracting.

“In 2003 the mountain pine beetle took off and so I was able to go out myself and find patches of wood and get them under a small-scale salvage licences,” Matthew says. “At the time stumpage there was $0.25 cents. It was very profitable period for about two or three years. In that time I was able to upgrade some equipment, get my own loader.”

“They were profitable jobs but a little bit out of my realm. I brought back Mike to manage the project. It was about eight months of work, 35 kilometres of right-of-way that we cleared with heavy time constraints. At one time I think we had 35 machines with more than half subcontractors and the rest my employees.”

Again Matthew used the profit to reinvest in the company and purchased newer, bigger equipment. “Going from two machines up to seven, and with newer equipment, I was always looking for more volume,” Matthew says. “Instead of 20,000 metres a year I needed 80,000.”

Today Chinook Cove takes on contracts from West Fraser, Interfor and Tolko as well as other pipeline clearing projects. The company averages about 100,000 cubic metres a year, which includes 20,000 for Simpcw First Nation.

Pipeline clearing
Pipeline contracts can be challenging from a management standpoint because of the number of contractors and companies involved. While Matthew keeps his own crew performing as needed to clear the site, other companies with their own contractors must be relied on to keep up their portion of the work. If parties don’t co-operate or one is lagging, it can slow down the process.

The Kinder Morgan job involved the work of three companies; Chinook Cove harvested the fibre and cleared the site, another company marketed the wood which was hauled out to sawmills, and a third company laid the pipeline.

Chinook Cove employees and subcontractors ran four feller bunchers, four log loaders and six skidders to harvest the wood in a 35-kilometre stretch. Any creek they came across had to be either bridged or navigated around.

Keeping his crews safe is a No. 1 priority for Matthew. During pipeline projects, working with up to 50 employees, Matthew holds safety meetings every morning to make sure the crews are up to speed.

In addition to his logging and pipeline clearing business

Don Matthew owns five logging trucks under the company name Roadmen Transport. The trucks haul about seven hours on average to the mills

Fleet for steep
Chinook Cove’s current fleet is tailored to handle the wood in the North Thompson.

“Where we log it is steeper ground; we’re probably in that 40 per cent slope range and about 25 per cent of our blocks are steep,” he says.

Species includes fir, cedar, spruce, balsam and a bit of pine, anywhere from 0.2 cubic metres up to a cubic metre per log. The harvest will result in seven or eight sorts at times, which are all cut to length and processed roadside.

To handle the slopes and the species range, the fleet includes a Tigercat 630D skidder, and for attachments, Matthew is partial to Southstar processing heads.

“Every year I probably get one or two brand-new or used pieces,” he says.

Matthew also owns five logging trucks under the company name Roadmen Transport. The trucks haul about seven hours on average to the mills.

Employing right
Chinook Cove’s employee count changes according to the contracts, which are often seasonal. The full-time staff roster is about 12. Loggers in the bush work Monday to Friday, putting in 9.5 hours on the machines and half an hour of service work.

“I’ve worked 15, 16 hour days and I said I would never do that to my men. If they’re going to drive for two hours, they’re going to work 9.5 hours. In my opinion you become unproductive after that. Repairs and maintenance of equipment goes up after that,” Matthew says. “If they’re working a few extra hours to finish up, I’ll tell them to come in later the next day to start the next block.”

An important hire for Chinook Cove was Jeff Young, the company’s logging foreman. Hired 10 years ago, Young allows Matthew to focus on the company’s future projects.

“I look after the guys to get them started and running,” Young says. He makes the decisions on the ground and consults with Matthew as challenges arise. Young is also able to operate all of the forestry machines as needed.

Matthew is an excellent boss, Young says. “If some of the workers need a drag he gives it right away, no questions asked. He’s fair, he’s straight up and honest. His handshake is worth his signature,” he says.

“I’ve been in forestry my whole life; it’s been about 35 years logging and in the industry looking after heavy equipment,” Young says. “It’s changed a lot but we deal with it.”

Matthew has long been a conduit for members of his band to get training and steady work, but that doesn’t always work in his favour; many move on to other career opportunities. But it’s a reality that doesn’t faze Matthew.

“I’ve lost count of the number that I’ve trained and that have found work somewhere else, and I’m fine with that as long as they’re out there contributing and can say, ‘I started there,’” Matthew says.

This year Chinook Cove took on another pipeline clearing project that will likely keep them busy for the next year. Matthew knows it won’t be easy work, but it’s a profitable job for his company and employment for his community, and that’s enough to keep him happy.