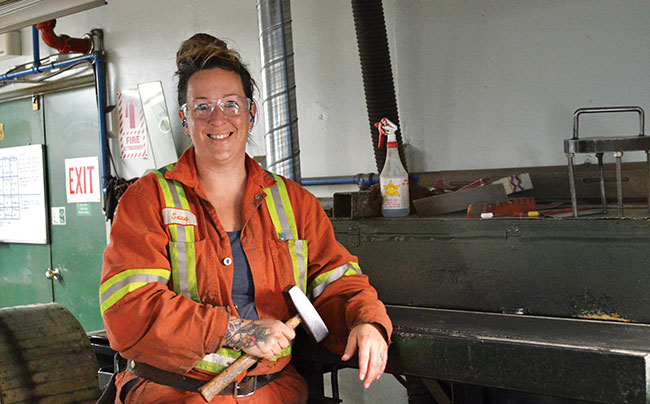 The saw filing trade is one that is not widely understood or well-known among the general public, or even among those who work in sawmills. Saw filing is “just not a very recognized trade,” says Sara Davies, a ticketed circular saw filer with Spray Lake Sawmills in Cochrane, Alta.

But Davies wants to change that by raising more awareness about the trade, encouraging more women to get involved in saw filing, and advocating for increased support for underrepresented groups.

The right fit
Davies, who first joined Spray Lake Sawmills 12 years ago in the clean-up department, never planned on becoming a saw filer. After working in clean-up for two years, a grinderman position opened up in the filing room, and she took a chance to see if she liked it.

It turned out to be the right fit for Davies for the next eight years – and gave her a better understanding of what goes on in the filing room. She was in charge of sharpening the knives for different machines, re-fitting and re-milling guides, sharpening the bandsaw, and replenishing supplies on a daily basis.

After having her daughter and taking a year-long maternity leave in 2016, she returned to the mill and had a short stint working in production. “I’ve always been kind of interested in the trades, but [was] never really sure where I would fit in,” she says.

Stacy Fontaine, the head filer at Spray Lake, encouraged her to take up a saw filing apprenticeship.

“From what he said, it seemed like an interesting start,” Davies says. “He made it seem not so scary. He said, ‘You can do this.’”

Journey to full-fledged filer
As the only female saw filer at the mill, Davies admits that she was somewhat intimidated when she first started her apprenticeship, but says she has been very fortunate to work at Spray Lake Sawmill, an equal opportunity employer.

She has seen what she calls the “snitty” side of the trade elsewhere.

“I’ve seen how men can be towards women, and it’s not nice,” she says. “It’s hard to stand up for yourself. But, I got really lucky with [my] company,” she says.

For Davies, who doesn’t have a mechanical background, the mechanics of the trade were daunting, but her co-workers helped her learn. Now, as a ticketed circular saw filer, Davies is apprenticing on the bandsaw after learning how to hammer roundsaws in her first year.

The saw filing apprenticeship requires in-class training for four or six weeks at a time at Thompson Rivers University, in Williams Lake, B.C., with three years of apprenticing. Davies will soon go back to the university to get her benchman endorsement – the final part of her journeyman saw filer ticket.

Since Davies lives in Alberta, she has to leave her family for those four to six weeks of schooling each year, leaving her husband to take care of their five-year-old daughter.

But, it’s worth it to Davies to do a job that she loves.

“Every day is different; there are so many different areas that you can learn – fixing machines, all of the alignments, fixing the saws, welding. There are all different categories in the department that you can hone in on.

“I think it’s just one of those careers where you’re constantly learning,” she continues. “As filers come through the department, everybody does it differently. Every guy I’ve worked with so far does everything differently to some extent. So, you can take little bits that worked for you from each person and kind of make yourself into a better, more experienced, well-rounded filer.”

Keeping the mill running
And as a ticketed circular saw filer, Davies’ day-to-day responsibilities are extensive.

“We typically change a few saws at the beginning of the shift, a couple of saws at lunch time, and the rest of the saws get changed again at the end of the shift – the beginning of my night shift,” she says. “So, I have to fix those saws and get them sharpened and ready to run.

“It’s basically hammering and sharpening saws, and any other mechanical things that need to be fixed,” she explains. “Sometimes the machines break and you have to think outside of the box to fix [them]. We do a lot of the changes – if there are any crashes upstairs, we have to go up right away and do the changes. The goal is to fix the saws and keep the mill running, as quickly as possible.”

But, Davies is surprised at how few people know what saw filers do.

“We just had an opening for a grinderman position, and there were many people asking, ‘What do you guys do in a day? Just change saws and sit around all day?’ But, actually, there’s a lot more to it than just that,” she says.

Unfortunately, there aren’t many organizations that can help build awareness about the trade. The only convention in Canada dedicated to saw filing is in B.C., and the trade is not a recognized Red Seal trade.

However, there is a Facebook group where saw filers can connect and discuss problems they’re facing, equipment they’re using, job openings and more, Davies says.

“It’s a good networking tool. You get a lot of people that come on there and are interested in going into the filing room. They’ll ask more about the trade and what it’s like in the filing room,” she says.

Closing the gender gap
To raise more awareness about the trade, Davies talks to people, particularly other women, about what it entails and the opportunities available. She is exploring the idea of volunteering for the B.C. Centre for Women in the Trades (BCCWITT), which offers support specifically for women and other underrepresented groups in the trades.

As a volunteer, Davies would have the opportunity to talk to a high schools or public groups, in-person or over Zoom, to discuss the trade and its benefits.

“I think it’s great because not only are they offering the support, but they’re going out there and presenting the trades to people,” Davies says. “Some people just need that push, especially women and those who don’t have the same ability or privilege to do whatever schooling they want to do.”

Davies says she would like to see more support for women and underrepresented groups across Canada, not just in B.C., to help address the gender disparity in the saw filing trade.

“There’s not a lot of support for women, which is unfortunate. I think part of it is also the fact that it’s not really a Canada-wide trade,” she says. “B.C. has an amazing support system for women and underrepresented people in the trades; however, it doesn’t really apply to people in Alberta, or Saskatchewan or Manitoba.

“I would love to see more information and more awareness about the filing rooms, and not just at the B.C. Saw Filer’s Association Convention, because it’s usually filers that go to that,” she adds.

A Red Seal designation would help standardize the trade across the country, offer support for underrepresented groups and raise more awareness about it in general, she says.

“I think it’s beneficial to encourage the employers and co-workers to be open-minded,” she says. “This is not just about you; it’s about everybody working together, encouraging the crew, the management team and other co-workers.”

Looking ahead, Davies hopes to be a journeyman saw filer soon, and sees herself still working at Spray Lake Sawmills in another five years. She also hopes to be involved in establishing a support system similar to the BCCWITT in Alberta.

“That’s one thing that, in the last little while, has piqued my interest – that there aren’t really any women or supports for women in the trade,” she says. “I’ve been through it, so I feel like I can relate to challenges women entering the trades may face.”