April 7, 2016 - The Council of Forest Industries' (COFI) annual convention kicked off this morning in Kelowna, B.C.

Several hundred delegates were welcomed to the city by industry leaders and local and provincial politicians, including City of Kelowna Deputy Mayor Luke Stack and Chief Robert Louie of Westbank First Nation.

COFI president and CEO Susan Yurkovich kicked off the convention discussing the importance of a healthy, competitive forestry sector in B.C.

“We contribute about $12 billion to the provincial GDP,” she told the crowd. “This is an industry that matters.”

Approximately 145,000 people across British Columbia are employed by the forestry sector. That’s about one in every 16 jobs in the province, and one in every four manufacturing jobs.

“Its really important to note that the competiveness agenda is not an end goal, it’s a process, a lens that we always need to look at all of our forest policies through,” he told the crowd.

Thomson said that his government will continue to focus efforts on ensuring that B.C.’s forestry sector will have access to fibre, global competitiveness, strong relationships with First Nations, and stable communities as a result of that.

“The forest sector is one of the key economic drivers in the province,” Thomson said. “We’ve come through a devastating economic downturn… I’m pleased to say that in 2016, the sector continues to rebound and continues to grow.”

Thomson also touched on the work being done to produce a new softwood lumber agreement with the U.S.

While free trade would be better, the industry and B.C. government do like the stability that an agreement like the SLA brings to industry, Thomson told the crowd.

“Without this strong competitive sector, these high-paying good jobs will cease to exist, so we need to continue to work on this,” he said. 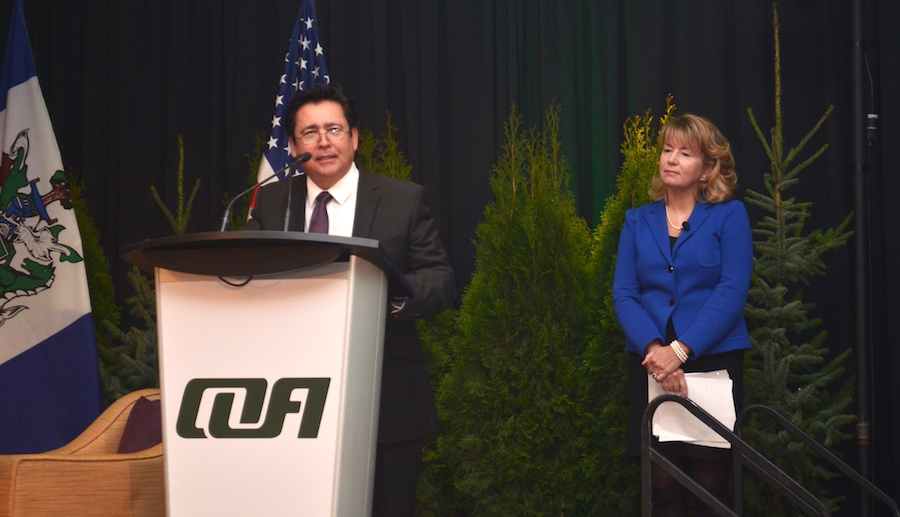