April 6, 2018 - The B.C. forest industry gathered in Prince George this week to discuss industry trends, challenges, and solutions, and for the first time the audience at the BC Council of Forest Industries (COFI) annual conference included coastal companies. 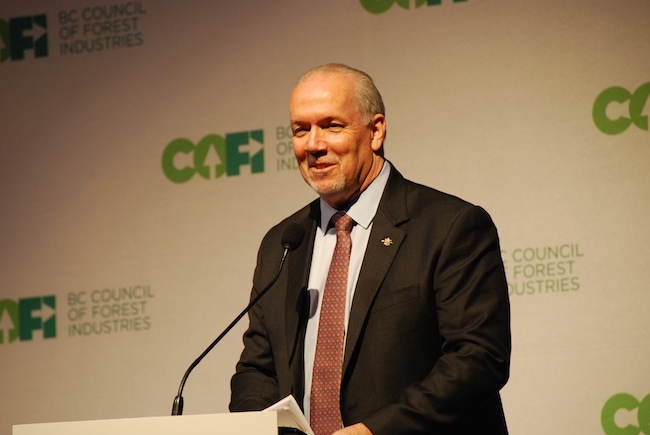 In December COFI and the Coast Forest Products Association merged into one organization. COFI president and CEO Susan Yurkovich welcomed the new members in her opening remarks, noting the strength of having a united voice representing B.C.’s cornerstone industry.

The importance of co-operation among producers emerged as a theme during the three-day conference. As part of the CEO’s panel, West Fraser’s Ted Seraphim, Sinclar Group’s Greg Stewart and Canfor’s Don Kayne agreed there has been progress in industry co-operation over the years, and that it needs to continue. The CEOs said safety, in particular, is a priority for them, and an area in which mills should learn from each other.

“We’ve got to make sure we come together as an industry and find solutions with governments. My advice to industry here is to understand the issues and work with government to find a durable, science-based decisions,” Seraphim said.

B.C. Environment Minister George Heyman and Minister of Jobs, Trade and Technology Bruce Ralston joined Donaldson for a minsters panel moderated by Greg D’Avignon, president and CEO of the Business Council of BC. The ministers fielded questions from the audience about shrinking annual allowable cut, impending caribou regulation, and calls to partner with First Nations. They identified reconciliation and adoption of the UN Declaration on the Rights of Indigenous Peoples as a high priority for government and industry.

Premier John Horgan’s address to COFI on Day 2 affirmed the importance of the forest sector to the provincial government. “I want to lead a government that focuses on making your industry as strong as it can be. I want to see you continue to provide good paying jobs. We need to turn your industry into our industry,” he said.

Markets
Canfor senior vice-president Kevin Pankratz speaking on the international markets panel said there is a global trend towards building with wood to reduce carbon footprints. Countries such as China and India that have traditionally relied on hardwoods are beginning to see the value in Canadian softwood for hybrid buildings and engineered timber. “It’s going to require innovation for us to mobilize the growth of our industry globally,” Pankratz said, referring to the demands for panelization and mass timber.

Japan and Korea are also on the radar for Canadian producers, said Paul Newman executive director of market access and trade for the BC Council of Forest Industries. In Japan changing demographics is increasing demand for multi-family homes and elderly care homes. In Korea the government is pushing for net-zero buildings, which means an opportunity for Canadian producers to help grow the construction industry’s capacity to build with wood, Newman said.

Turning to the large U.S. market, Paul Jannke with Forest Economic Advisors said there will be a surge in lumber demand over the next several years based on changing demographics, decreasing urbanization, record-high home equity, and older median home age. The largest factor in the demand, he said, is a shrinking labour force in North America. “There are simply fewer workers out there; not just at the sawmills but in logging as well,” Jannke said. While European and Russian imports are increasing in the U.S., “The good news is that North American lumber is still the lowest cost to produce so we can take advantage of the higher prices,” he said.

During the conference the B.C. government announced a $7.8-million fund to promote the use of B.C. wood overseas, advance wood building systems and products, and expand global markets. The bulk of the funds will go to activities targeted at expanding markets for B.C.’s wood products, while $1.85 million will go to Wood First to encouraging the innovative use of wood and wood building systems in B.C.

The supercluster is a collaboration of members that will act as a catalyst to solve challenges faced by industry, including the forest sector, and position Canada as a global leader in digital technology. Canfor and TimberWest are founding members of the supercluster. The aim for forestry is to analyze and use the volume of data collected to optimize supply chains and production. Prelazzi also identified an important benefit of incorporating digital tech: “Everyone over the age of 15 has grown up with the internet,” Prelazzi said, “that means embracing digital technology will by default attract youth to the forest sector.”

On the CEO Panel Seraphim echoed that idea, noting that new technology and developing new products in the industry such as mass timber and biomass products is appealing to youth. “It allows us to attract young people who have innovative minds,” he said.

A panel of speakers addressed the topic of jobs and recruitment. Canfor’s manager of learning and talent, Kara Biles, said companies need to consider strategies to attract women, visible minorities and Indigenous peoples. Promoting the industry as innovative and climate friendly goes a long way to attracting and retaining people, she said.

A survey of B.C. residents from Abacus Data, found that 81 per cent of respondents have a favourable view of B.C. producers of lumber and wood products, and 87 per cent believe a strong forest sector is vital for B.C.’s economy. Presenting on the survey, Bruce Anderson, chair of Abacus, said the numbers show the industry has made great strides in improving public opinion in the last decade. But there is still work to be done to share the message of a green industry that’s products, by nature, sequester carbon, he said.