While many sawmills in the B.C. Interior struggle to bring in sufficient sawlogs to operate, Canfor is taking advantage of the favourable market conditions to make capital investments across the company with the aim of making its sawmills more efficient and productive. One such sawmill, the Elko Sawmill, is located in the Kootenay region of British Columbia and has 175 employees.

A tiny sawmill town in the South Country, Elko stands on a high plateau at the beginning of the Rockies’ Elk Valley north of the Roosville Canada-U.S. border.

Elko Sawmill enjoys some very good quality spruce, pine and fir with a little bit of Douglas Fir sharing an annual allowable cut of 1.1 million cubic metres between three of Canfor’s regional mills with access to other purchasable fibre as needed.

Processing logs up to 18 inches in diameter, the largest lumber produced is a 2x10; the mill consumes logs with four-inch tops to 18-inch tops. Once the $40 million in upgrades are complete, the company expects to be able to run the mill through any market conditions – good news for a small town without any other major employer.

The upgrades began in the middle of December 2012 and will be completed in February 2014. They’re primarily designed to improve the mill’s cost structure and the product line.

“Down in Kootenay here, we have a very good fibre supply and that was the reason Canfor’s interested in this region,” explained Adrian Chabot, plant manager, while dis-cussing the company’s plans to upgrade. “It’s mostly unaffected by the mountain pine beetle.”

To take advantage of the high quality of fibre in the region, Canfor recently intro-duced a premium line of products. They’ve branded it Canfor Red – wrapped in red paper to be highly visible on the trains or trucks that carry it across the North American market. The line was introduced in 2013 and has given the company some extra attention. According to Chabot, the region enjoys a fair amount of primes, which are generally shipped to the U.S. or Japan, but the mill also focuses on MSR lumber, stress-tested for the U.S. market.

The Canfor capital expenditures are spread out among a number of sawmills all looking for similar improvements meant to make the plants more productive and competitive over the long run. There’s a capital project group that has tweaked the process through similar upgrades to take much of the guesswork out of the investment.

Working through the experiences from previous expenditures with trusted suppliers and mill personnel, the capital projects group looked at each piece of equipment to discuss what was working and what needed improvements. “It’s a collaborative effort to fine tune everything to make sure it’s going to go as good as it can,” says Chabot.

He says one of the benefits of replicating upgrades across sawmills is that though the vendors started off the training, Canfor is able to do a lot of the training internally between divisions as needed.

“We had experience just up the road here in Radium in a similar project last year so we were able to go up there and have a look and see how the pieces of equipment were running.”

The improvements are being made at the front end of the mill, at the planer mill and to the kilns. The entire sawmill and planer mill construction project was managed by the BID Group (for a project diary and slide shows, visit http://www.bidgroup.ca/2013/07/elko-sawmill-project-commences/).

The new process starts with the harvest: before, logs had been bucked at the mill, now they arrive at the yard cut to length (CTL) and are fed straight into the debarker.

The sawmill has two lines, one of them an Optimil canter line that was upgraded with a new 10-inch Optimil gangsaw with in-line profiling capabilities for the top and bottom boards. One of the existing canter lines will be replaced with a Comact DDM6 small log line.

“We know going forward we need to focus more on smaller fibre. This DDM6 is a small log machine so it is able to handle the smaller logs better and it’s a lot more efficient with them as well,” Chabot explains.

While secondary breakdown was running well, two new Deltech kilns are being added to the site to improve energy efficiency and replace older ones that are in the process of shutting down. The new kilns have more up to date technology, which has improved the quality of the lumber exiting the kiln. “We’re able to dry everything we produce,” Chabot says of the upgraded systems.

A new greenfield planer was started from scratch and the upgrade was managed to allow the old planer to be used up to the day the new one was launched. The investment includes an SEC tilt hoist and stick collection system.

The planer is a Gilbert pull-through high-speed planer followed by a Comact trim line optimized by a Comact GradExpert, an automatic grading machine. The system offers cut in two capabilities to maximize value recovery at all times. There are two stackers – one Comact and the other SEC – followed by a Signode strapper and two Deltech paper wrap lines. While all new to the Elko mill, the technology used here is hardly new to Canfor.

“We actually used [these same suppliers] in numerous other upgrades we’ve done throughout our company,” explains Chabot. “This planer process that we just built here, we actually have running in other operations so we like the idea of just going with the same companies, we’ve got good relationships with them, we know how they work.”

Though the upgrades are still a work in progress, much progress has already been made in production efficiencies. “The biggest improvements are around production, efficiencies as well as grade outruns. The automatic grading system is able to grade at a higher rate and come up with better solutions so it’s able to extract more value as a result of that.”

Chabot expects the upgrades will result in a 15 to 20 per cent increase in productivity. Already he has noted almost a doubling of output per hour: now producing 60,000 board feet per hour with the new planer.

Canfor has announced an additional $10 million investment towards the installation of a wood biomass-fired energy system to improve efficiency at the Elko sawmill.

Capital improvements paying off for Canfor
Despite capital expenditures for restructuring at several sawmills company-wide, Canfor announced its fourth quarter results were up by 31 per cent. Canfor reported results of $28 million in Q4 2013, which is flat with Q3 but up almost $7 million over last year.

Operating income for the fourth quarter of 2013 was $53.8 million compared to one of $49.3 million for the previous quarter, attributable to strong gains in lumber markets as well as higher pulp production and shipments. Gains were partially offset by lower lumber production and shipments and increased log costs on top of the $20 million of restructuring costs related to the closure of the Quesnel Sawmill. There was also a one-time cost of $1.1 million associated with a labour agreement. When adjusted for these one-time items, the company’s operating income for the fourth quarter was $74.9 million, an increase of $25.6 million compared to the third quarter.

Lumber markets continued to demonstrate improvement in demand in the U.S. and solid offshore markets, Canfor’s president and CEO Don Kayne explained in a press release. “With our significant investment in capital upgrades over the last couple of years, most recently at our Mackenzie and Elko Sawmills, we are well placed to take full advantage of the improving market conditions.” 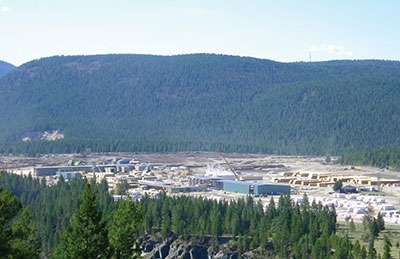 A tiny sawmill town in the South Country Canfor is taking advantage of favourable market conditions to make capital investments across the company with the aim of making its sawmills more efficient.
Print this page