André Gagnon’s company is called Tronconnage Gagnon Inc. — a name that refers to the first service provided by his business. If it could fit on a business card, a more accurate name today might be “Gagnon Logging, Roadbuilding, Millyard Wood Handling & Trucking.” His company does all of that and more, with a small army of Cat equipment and a fleet of transport trucks. 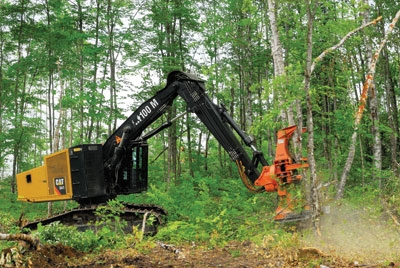 André Gagnon’s company is called Tronconnage Gagnon Inc. — a name that refers to the first service provided by his business. If it could fit on a business card

Gagnon started in the bush as a feller buncher operator about 30 years ago when he was in his early 20s. He impressed his employer, Canadian International Paper Company (CIP), a Montreal-based company that eventually became part of AbitibiBowater Inc., who then asked him to operate a tractor to build access roads into the bush. In 1984 Gagnon bought his first machine, a Cat track-type tractor, and started his own company in the tiny village of Bois-Franc, about 15 kilometres north of Maniwaki, Que., where he and his family live today.

Over the next 12 years he expanded his roadbuilding activities, but when that work slowed, he bought a slasher and added wood handling to his business, cutting wood for Louisiana Pacifique (LP) in its Bois-Franc millyard.

In 1999 he found himself at a crossroads. “A business partner in the millyard quit, and the company asked me if I wanted to take over his work unloading incoming trucks and feeding the mill. That meant buying a couple of knuckleboom loaders and a few other machines,” he says. That same year, Gagnon bought out his partner in Transport Coga Inc., a trucking company launched in 1997. He signed a contract to transport the LP mill’s finished product – 4 ft. x 8 ft. oriented strand board (OSB).

But Gagnon missed working in the woods, so in 2003 he started to make his way back by building roads in the bush for LP and other logging companies. He had a lot of machines parked at the time, so this also allowed him to put more of his equipment – excavators, tractors and graders – back to work. 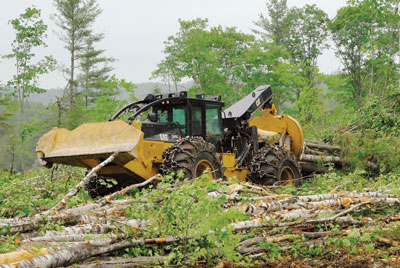 Crossroads
Last fall he came to another crossroads. LP was looking for a logging contractor and  Gagnon debated whether to go into the bush full time in addition to the millyard work. The decision came at a time when the economy was still soft and he would have to make a big investment in additional equipment.

Gagnon had help making the decision — from his son, Nicholas, who joined the business a couple of years ago. The senior Gagnon, 53, is the risk taker; Nicholas, 28, is more cautious and takes more time to make decisions. “It’s very good because we talk a lot before I decide. Sometimes he tells me ‘just wait’ and I do . . . most of the time,” Gagnon laughs.

Father and son decided that despite the risks it was an opportunity they couldn’t pass up, so last fall Gagnon bought the machines he needed for logging — a Cat 541 track feller buncher, Cat 545B and 545C skidders,  a Cat 320C FM and a Cat 322 FM, both configured as delimbers, a Cat D6 track-type tractor, a Cat 329 excavator and a Cat 140H grader. He also bought two more trucks for the woods.

Gagnon’s primary customers are now LP and AbitibiBowater Inc. For LP he supplies wood, unloads and loads trucks, slashes and handles wood in the millyard and feeds the mill. He rents his Cat forklifts and skid steers to LP for work inside the mill and maintains that equipment. Then he transports the finished product via his trucking company to markets in Toronto and Montreal. For Bowater’s lumber mill in Maniwaki, he unloads the wood and uses a couple of Cat M325C wheel material handlers to feed the mill. He also builds and maintains roads for both companies.

Millyard work accounts for 60% of the business, logging accounts for 25% and roadwork about 15%. Nicholas directs the operation in the bush, while the senior Gagnon oversees the millyard activities and works closely with his dozen or so mechanics in the garage to keep maintenance costs down.

Good engines, components
With his first machine purchase in 1984, and as he progressed from roads to millyard to the bush, Gagnon has stayed with Cat equipment. He currently has 36 Cat machines. “We love Caterpillar. They make good machines that give the operator what he needs to do the job. They have good engines and components,” he says.

Gagnon is just a bit embarrassed to admit that he does not demo other brands when it comes time to buy equipment. “We’re very happy with what we have.” He also says he is happy with the attention he gets from the Hewitt Group, the Cat dealer for Quebec, the Maritimes and Western Labrador, and the help he gets from Cat Financial.

“I always go with Cat financing, because Cat Financial has a good rate and they are flexible,” he says. “If I need anything, they always try to help me.” 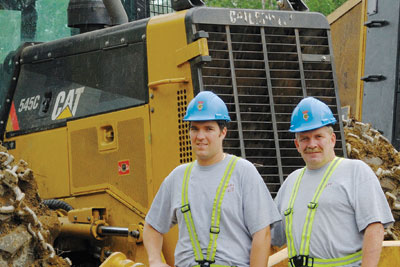 Teamwork
Gagnon says business now is “not bad.” “We work hard. Lots of hours. We have to carefully consider every business decision because it’s still tough this year,” he says. “But we are very lucky because we have very good operators. Most of the employees have been with us at least 10 years.”

One reason Gagnon can attract and keep good employees is his generosity and flexibility with his crews. “We try to work with the guys. They are our friends. If they ask me to leave early, I always say yes. Or when the machine needs something, we buy it right away,” he explains. But, he adds that it works both ways. “When I ask them to come help me, it’s always yes. We work together. If an operator is good, but he doesn’t work with us, I won’t keep him.”

Three years ago the company had to downsize to 35 employees because of the slowdown in the forest industry. Gagnon is back up to 60 employees now. “Maybe we’ll go to 70 in the summer with the contracts coming out,” he says, while smiling at Denis Constant, the Hewitt sales representative who was selling him another Cat D6 tractor for additional roadwork LP was asking him to do.

Family is a big part of the business. Besides son Nicholas, wife Sylvie is the accountant.  Two other children, Sébastien and Fanny, are going to university now, but also help with the business. A brother, a nephew and five cousins also work in Tronconnage Gagnon.

Fuel Prices
Gagnon’s biggest expenses are salaries and fuel. If he could change one thing about the business, it would be the price of fuel. “Fifteen years ago I paid about 58 cents for a litre. Right now, maybe $1.09 or $1.10. Last year it went to about $1.35 a litre. It’s very hard to work when the price of the fuel is high like that.”

Other than the obvious efforts to conserve fuel, Gagnon doesn’t know what else he can do. “We don’t do anything special. We have to work,” he says.

Drag Racing
However, it’s not all work in the Gagnon household, and for fun, Gagnon and his sons are active in big rig drag racing and “show & shines,” beauty contests for customized trucks. Here their roles are reversed: the risk-taking senior Gagnon takes a back seat to Nicholas, who races a 10-wheel, Cat powered Peterbilt truck with as much as 80,000 pounds loaded on the trailer.

“Not me, I can’t drive that truck,” Gagnon says laughing. “Last year Nicholas finished first in the Quebec circuit. Right now we just race in Quebec, but if we had the time we could go to the States. We’re sure we would be tough competition.”

Full Circle
Gagnon makes a point of emphasizing his family’s importance in the business: “Right now, we work together because we have lots of guys. It’s too much for one person. But one day they will take over.”

When they do, you might find Gagnon back in the cab. “Truly, I would like to operate a tractor again, to pass the time.”

Connie Ness is freelance journalist based in Raleigh, N.C. She  produced this article for Canadian Forest Industries.