Only eight short years ago, Peace River Logging (PRL) was just an idea on paper. However, that idea became a reality a short time later as staff at the Daishowa-Marubeni International Ltd. (DMI) kraft pulp mill in Peace River, Alta., announced in 2004 that they would phase out the mill’s wood room, meaning almost all of the fibre consumed by the mill would be either whole log chipped in the bush or residual chips from local sawmill production. 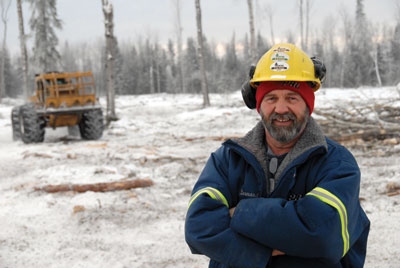 “The closing of the wood room at the local DMI mill was the driving factor behind the start-up of Peace River Logging,” explains Bernard Fortin, general manager of PRL. “I was the first person hired and my mandate was to find the right people and secure the right equipment to make this happen.”

Fortin was brought on board by the two partners in Peace River Logging – DMI and the local Woodland Cree First Nation. “When I started, the mill had placed an order for a Peterson 5000 chipper, which we still run today, but that was all that had been done in the way of securing equipment,” notes Fortin. “I started by purchasing a skidder, as we had to feed that first chipper, and then I had to find the people to run
the equipment.”

Acquiring Equipment
That first skidder Fortin talks about was a John Deere 748 3G grapple machine. “We bought the equipment as we needed it,” adds Fortin. “We didn’t need feller bunchers right away as there was still a lot of wood on the ground from the previous year, but in Year 2 of the business, we bought a second Peterson 5000 chipper and two bunchers to go with it.”

The bunchers were both Tigercat 870C models from the Paris, Ont.-based manufacturer and, as Fortin puts it, “that was our first taste of Tigercat and we liked what we saw,” adding, “they are good, solid machines that are built for the types of terrain found where we operate.”

When PRL started out in 2004, it was only a partial year for production and the company harvested just 90,000 cubic metres from August to December. The following year – 2005 – PRL ramped up to 250,000 cubic metres, and from there, Fortin says they never looked back. Last year, PRL harvested approximately 500,000 cubic metres, 90% of that being chips for DMI with the balance being saw logs for a local sawmill. As for the number of direct employees, PRL has grown from Fortin being the only employee when the company started up in 2004 to around 40 today, depending on the time of year. 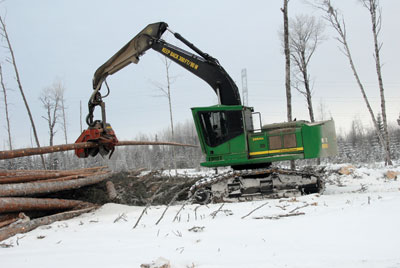 The equipment stable has also grown substantially over the years. Today, PRL still runs the two Peterson chippers from the early days and have upped the quantity of bunchers to four, including the two original bunchers and two brand new Tigercat 870 models picked up in August of last year. “We stuck with Tigercat because we have been really happy with the first two bunchers we bought from them,” explains Fortin. “We haven’t had any cracked heads or booms and they are just good, strong machines. Plus, if we stick with one type of machine it is easier to keep a parts inventory, and we have a Wajax dealer fairly close by in Grande Prairie where we can get other parts when we need them.”

When PRL bought the new bunchers, it also picked up a new Tigercat 630D skidder. The company had previously purchased a Tigercat 620C skidder, which Fortin says was an experimental model that led to the development of the 630D. He says they have also added two more John Deere 748 G3 skidders and one John Deere 848H skidder into the mix and still have the original John Deere 748, for a total of six skidders. 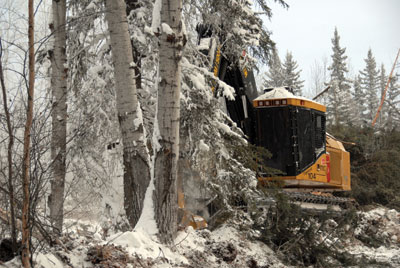 In addition to evaluating the Tigercat gear in the woods, Fortin has visited the Tigercat factory a couple of times. The last time he was there, he took his supervisor, Erik Lokseth, with him. “We toured the factory and talked to the technical people at Tigercat,” Lokseth explains. “The thing I really love about Tigercat is they are willing to work with the contractor to make the product better. They want our input and if you want to talk to the company president, you can. Plus, we get really good support from the Wajax dealer in Grande Prairie. Their service department is excellent and they are fast when we need something.”

Roadbuilding
PRL also takes care of in-block roadbuilding and maintenance in the areas where the company operates, which Fortin says are generally within about a 160-kilometre radius of Peace River. For grading, PRL runs  a John Deere 872D model and a John Deere 772 GP. In total, the company maintains about 170 kilometres of road, which includes the main haul roads and the smaller block roads. In terms of roadbuilding, he estimates that PRL builds about 50 kilometres of road within the blocks every year. For this task, his crews  use a Komatsu D155 dozer, a Komatsu D65 dozer and a Hitachi 240 excavator, which Fortin says is excellent for building creek crossings as “it keeps everything clean.”

Trucking is the only part of the process PRL doesn’t handle themselves. Fortin says they do have a pair of Kenworth T800 trucks with flatbed trailers for moving equipment around, but all other trucking is handled by contractors. That includes 16 chip trucks operated by Excel Transportation and nine logging trucks operated by Knelson Sand & Gravel from La Crete, Alta.

More Than Chipping
But PRL is about more than just chipping. The company is also the biggest log supplier to Boucher Bros Lumber, a family-run dimension sawmill in nearby Nampa, Alta., that produces 2×4 to 2×12 products in lengths up to 16 ft. This year, Fortin says PRL will supply Boucher with about  90,000 cubic metres of coniferous saw logs. “DMI gets all of the aspen plus any pulp wood that is not suitable for the sawmill and the rest goes to Boucher,” he says. “It’s a good fit for us as Boucher uses all tree-length logs so there is really only one sort for the sawmill.”

Today’s Challenges
For Fortin and Lokseth, one of the biggest challenges they face is keeping operators in the seats of the equipment. Although things are not as difficult as they were a few years ago, Lokseth says they are still competing for employees with the oil and gas business. “That’s one of the reasons the Boucher sawmill business is so important to us,” he explains. “That diversification means we can keep our guys working for more months every year.”

Another plus for PRL when attracting employees is the company’s modern camp, which can house 36 people. It is a full-service camp that PRL owns and operates. For many of the company’s employees, not making the one- to two -hour trek to and from  work each day is appealing. “Between the camp and the fact that we can keep our guys working for 10 months out of the year, we manage to attract some good operators and keep them,” adds Fortin.

The other major challenge for PRL is giving the mill what they need in the way of chip quality. “Bark and fines are not good, as the mill has to use more chemicals to break them down and that adds to their production costs,” Fortin explains. “We need to provide them with chips that are a consistent size and quality and we need to minimize the bark content. But that can be difficult to achieve, as it is dependent on a number of factors such as the log quality and how long the logs have been sitting on the ground. We have actually found that the best situation is to work with logs that have been felled for some time, so last year DMI ran a trial where they left 60,000 cubic metres of logs on the ground and then chipped them this year. We are finding the quality is much better than when we chip freshly harvested logs.”

Fortin, who grew up near Peace River in the French-speaking community of St. Isidore, is the first to admit his job can be a bit crazy at times. However, he wouldn’t have it any other way. “I grew up farming and logging and this is a great job,” he says. “We have come a long way in a short period of time and that brings challenges, but it also keeps things interesting.”