June 17, 2016 - To learn more about the latest research projects underway to improve filing rooms, Canadian Forest Industries spoke with Bruce Lehmann, associate research leader for the machine and saw performance group at FPInnovations about what the future may have in store for saw filers across Canada. 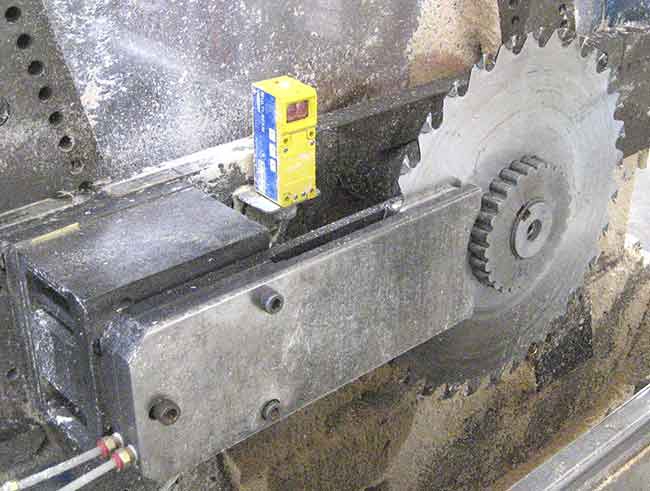 Here’s what we learned about FPInnovation’s latest projects:

Tooth inspection methods
FPInnovations is testing out high-accuracy lasers to scan a tooth.

“We’re thinking of having this baby on the grinder,” Lehmann says. “As the tooth is being ground it’s being checked right there.”

This system would be an improvement over the old Video Tooth Inspector.

“A lot of people complained it was a bit too slow – they’d have to take the saw off, clean it really well, it wasn’t automated,” Lehmann explains.

Since many mills are short on people and time, increasing the automation for tools like this is a necessity.

Saw temp measuring and monitoring
FPInnovations has developed a prototype battery-driven, wireless sensor that can measure the temperature of a saw while it’s cutting.

“Right now it would probably just be for troubleshooting, but we’re hoping it leads to continuous monitoring of the saws and maybe use it for feed speed control,” Lehmann says. “We’ve had it for the band saws for a long time, but for circular saws we can’t get a probe to accurately measure saw deflection. There’s no physical place for it where it will survive. The temperature measurement is something that seems to work and we’ve got a nice, safe place for it underneath the guides.”

Guide pad and lubrication
The sawing research group has been looking at different guide pad designs for circular saws to improve how to take heat out of the saw.

This research is being done to assist mills that are experiencing water problems, such as flooding in basements or water shortages in cases where wells that mills run off of are running dry.

“We’re trying out some different shapes and configurations to see what we can do,” Lehmann says. “Our strategy is to get the water in contact with the saw as much as possible so the water has a better chance to take heat out of the saw. Also, we want to get the water as close to where the heat is being generated, mostly near the teeth, to take the heat out before it can distort the saw plate and reduce saw stiffness. Getting the water right onto the lands near the eye and rim, which depends on the location and design of the lub ports seems to be the critical design issue.”

Flutter speed chart
FPInnovations recently completed its flutter speed chart for guided circular saws and are introducing it to the saw filing community. The chart is based on a refined model for guided circular saws that accurately predicts the onset of flutter vibration and good cutting performance at critical speeds created by wood-machining scientist, Ahmad Panah.

“Flutter speed is the limit to arbour speed as far as saw stability goes – saws cannot be run faster. Critical speed theory was developed for collared saws and it was assumed they would also be a problem for guided saws, but this didn’t prove correct. Guided saws can cut even if they are at a first or second critical speed.” Lehmann says. “However, the critical speed charts published by FPInnovations are still needed because worn and grooved arbors may create the conditions for a guided saw to perform poorly at a critical speed.”

Sawing Douglas Fir
For many mills, the proportion of mountain pine beetle wood is decreasing and they are switching back to green wood, which can contain a lot of Douglas fir. However, Douglas fir is more difficult to cut and some mills have not been able to cut as fast or as accurately as they do with pine.

“The main problem is that Douglas fir is much more dense, so cutting forces are larger,” Lehmann says. “This also means more heat is being generated, and press rolls have to provide more force to keep the logs and cants from surging or moving sideways. The power and torque loads on motors also go up. We will be looking at these issues this year.”

As far as trends coming to filing room goes, increased automation has been a long time coming.

“Because of this, filers need to start thinking more about what their job role is,” Lehmann says. “It’s not always on the bench or waiting for a grinder to finish a saw. Maybe they need to be able to spend more time on the mill floor seeing what’s going on so they can be proactive.”