June 5, 2018 - For many parents the motivation to build a successful business is to secure a healthy future for their children. For Craig and Catherine Galligos, their motivation is not only their son, but also the future of their First Nation community on B.C.’s Sunshine Coast. 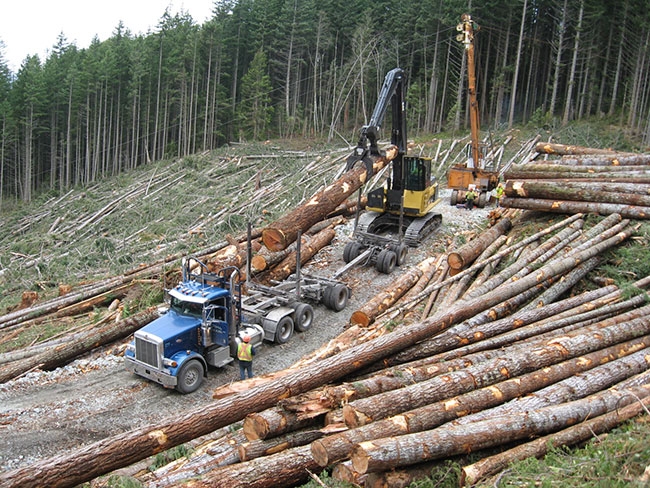 The Galligos are members of Tla’Amin Nation (formerly known as the Sliammon First Nation) located just north of Powell River, B.C. The nation is one of a handful in the province that completed the treaty process with the federal government. The nation became self-governing when the treaty went into effect in 2016.

Thichum Forest Products is a subsidiary of the nation’s development corporation. Thichum means “deep into the woods” in the Tla’Amin language. Craig is the forestry manager for Thichum and Catherine is the director of lands and resources for Tla’Amin Nation.

Thichum’s logging contractor is Tla’Amin Lake Contracting — a joint venture between the Nation and Goat Lake Forest Products, run by Kevin McKamey. “Goat Lake brought their expertise and we brought the logging and we created a company in 2007,” Craig says. The contractor employs 12–15 people, about half of whom are members of Tla’Amin Nation.

Last year Thichum built a log dump in the mill pond in Townsite. The building process was difficult, and cost close to $500,000, but the result is independence for the company, and ultimately the Nation. “With our own log dump and our own equipment, we control our own destiny. We have our own timelines and pull our own customers,” Craig says.

Powell River area’s timber profile is predominantly second-growth Douglas fir, which accounts for between 80–90 per cent of their harvest, Craig says. The rest is cedar, hemlock, maple and alder. The majority of their logs are sent overseas to Korea, Japan and China, with a small percentage heading to area mills.

Training
Tla’Amin Lake, similar to most contractors across Canada, struggles to employ the younger generation long-term. Part of the problem is the seasonal work. With their current workload, the logging outfit can only operate about six months of the year.

“I think what would help us is an even flow of work 12 months a year,” Craig says. “Our guys can work for six months, but what are they going do during the next six? That’s when the good guys leave to where they can get work all year round. We aim to be competitive enough to win new bids and to do work that’s satisfactory to the employer; that’s how we fix it. We won’t win them all, but it will steady it out,” Craig says.

Another solution is to work more closely with other forest product companies, such as Western Forest Products, which runs the forest licence surrounding Powell River. Western Forest Products previously ran forestry apprenticeships for Tla’Amin Nation members, Catherine says. “Western was able to teach them the right skills and introduce them to the right people. We do have a relationship with them, but it’s not as broad as we’d like it with logging and silviculture,” she says.

But unlike other contractors, Tla’Amin Lake finds a win in training Nation members who may or may not stick around.

“Many companies don’t want to spend the money to train people to have them take off, but we actually don’t mind that as much because we know our people are getting trained and they’re good enough to go anywhere and get good jobs. For us we see that as a success,” Craig says.

“Some First Nations companies want to just employ and train their own people. Others just want to make the most money. We try to do 50/50 — right down the middle. If we just wanted to train our people our profits would drop because we can’t really have both at 100 per cent. We have to give and take some of our profitability for our training,” he explains.

Second-growth iron
Tla’Amin Lake’s fleet is tailored for its second-growth harvesting profile. The roster includes a John Deere 2954, a Tigercat 880 and a Cat 328 log loaders, a 518 Cat grapple skidder, and a Terex rock truck.

The company is stump to dump, but Goat Lake owns all the logging trucks so Kevin takes care of transportation under subcontract.

Trees are felled, hoe chucked and then processed roadside in four sorts before being trucked to the log dump where they are boomed and towed out.

In Spring 2017, Tla’Amin Lake invested in a used Madill 122 swing yarder to begin tackling the steeper slopes in their harvest areas, and to remain competitive for timber sales. “We are overhauling the yarder — rebuilding the engine. We will have to get a proper operator so there’s a learning curve for that. We need to make it work in order to make a profit from this machine,” Craig says.

Last year the contractor began harvesting biomass in its block, but soon found out it’s disadvantageous to the bottom line. “The waste wood is going to reduce our AAC because it’s counted in the cut. We’re getting double dinged. On top of the stumpage we have to pay we also have to pay $0.25 per cubic metre of waste bill. Financially as well as our AAC we are negatively incentivized,” Craig explains.

“We can’t do anymore unless we go on to our private land wood within our treaty lands where we don’t have all of those restrictions,” he says.

Amicable takeover
The future for Tla’Amin Lake Contracting is to eventually become 100 per cent owned and operated by Tla’Amin Nation members.

“Our partner wants us to buy him out. That’s the end goal and he will tell you that,” Craig says. “We’ve been partnering for 10 years now, and we don’t have a plan or timeline to do that any time soon, but we do want to get there, maybe in 10 years.”

For now, Tla’Amin Lake loggers will continue to log side-by-side their non-member partners, gaining experience in the industry, and growing the business for the future of their community.

Building bridges
Indigenous communities are playing a more active role in forestry and many are looking for new opportunities, says Catherine Galligos, director of lands and resources for Tla’Amin Nation based in Powell River, B.C.

As one of just a few First Nations that have completed the treaty process with the federal government, Tla’Amin members like Galligos are a source of knowledge for other First Nations looking to develop their natural resources sector.

“Different communities have different land bases, different governments and are at different stages of that,” Galligos says. “If you are just under Indian Act you still have to go to Ottawa to ask for approval to take down one tree. If you’re under land code you are exempt 25 per cent from the Indian Act. If you’re under the reserve system you can log your reserve lands. There are no two alike.”

Not all First Nations have the money or equipment needed to log their own timber. Some who have the equipment may lack the knowledge needed to get the right price for their timber, and are in a position to be taken advantage of, Galligos says.

Developing good relationships with industry is the best path forward. In some cases, however, band politics can hinder that, Galligos says. Some Nations have a new government every two years. When Tla’Amin Nation became self-governing they developed a chief and council system with four-year terms, and created a separate economic development arm.

“That is the business arm of the Nation so we keep business separate from chief and council. There are two political representatives on the board, but they don’t have a vote. That’s our buffer between politics and business,” she says.