The Papasay Value-Added Wood Products Sawmill marks the beginning of a First Nation community rebuilding on its ancestral land. 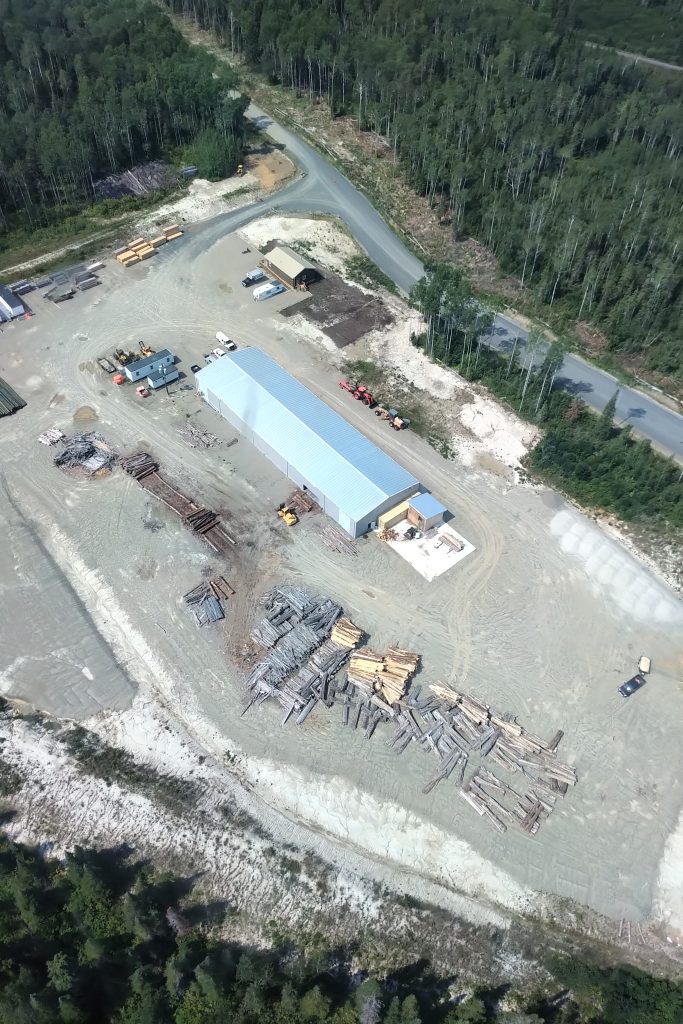 In Northwestern Ontario, deep in forested country, where there was once floodwater and a community displaced, there is a new sawmill that represents so much more than the value of the machinery inside.

The Papasay Sawmill resides in the heart of Lake Nipigon Forest in what is both the old and new home of Bingwi Neyaashi Anishinaabek (BNA), formerly called Sand Point First Nation. It’s a two-hour drive northeast of Thunder Bay, Ont.

One hundred per cent owned by the First Nation, the Papasay Sawmill is tooled for maximum flexibility to provide both local employment and the wood products needed to build a new community from the ground-up.

The people of Bingwi Neyaashi Anishinaabek have always called the southeastern shores of Lake Nipigon home. In the 1920s, Ontario dammed the Nipigon River, flooding all communities on the shores of the lake. The BNA people were forced to pick up and move to higher ground.

Not long after, in the ’40s and ’50s, the Ontario government cancelled the provincial License of Occupation that allowed BNA band members to live on their traditional land, instead claiming the land for a provincial park. Once again, BNA members packed up and left their homes, this time leaving their land behind entirely.

On April 22, 2010, after more than half a century, a federal Order in Council returned the Lake Nipigon Provincial Park territory to BNA. Work has been ongoing since to resettle and rebuild the community. Top of mind at the time for Chief Paul Gladu was a sawmill, explains BNA director of economic Development, Jordan Hatton.

“He had a vision of a sawmill being an anchor project for the community, which would bring members back home with a good job, and from that we could redevelop the First Nation that was destroyed,” Hatton said in an interview with CFI. 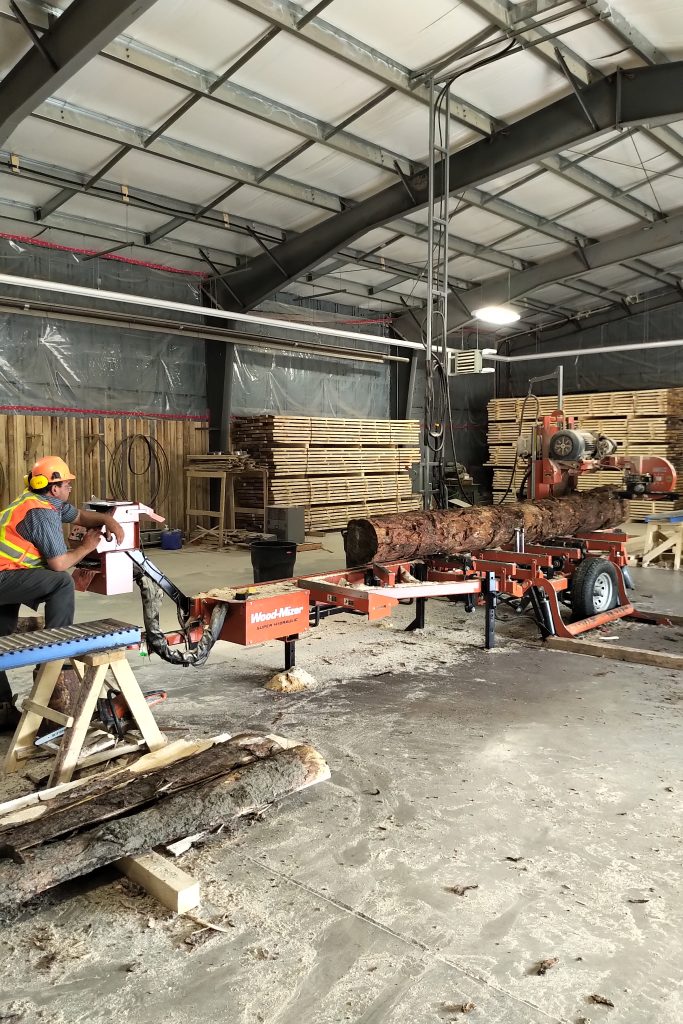 After years in the making, the Papasay Sawmill cut its first board in August 2017. Mill manager Art Gladu recalls those early days with a laugh.

“We started off in 2017, myself and two other BNA band members. We were running our sawline throughout the winter. Minus fifty outside, probably minus forty inside. We had a porta-potty outside because we didn’t have running water. We were pretty much working inside a pop can,” Gladu said.

Conditions improved radically thanks to Resolute Forest Products’ donation of two Herman Nelson diesel heaters, and support from federal funders. Today, the mill is hooked up to three-phase power and uses a Froling 150-KW boiler that runs on sawmill residuals.

“Now workers in the sawmill, instead of wearing parkas and heavy-duty pants, we’re back into our summer attire. We have our T-shirts, our safety vests, our hard hats. The temperature now is about ten degrees Celsius, which sounds cold, but sometimes that feels too warm when you’re sweating!” Gladu said.

Like any mill, Papasay Sawmill is a work in progress. At its current state, the mill can produce 2,000 bdft a day, running whatever species they have in the log yard: typically birch, cedar, poplar or SPF. 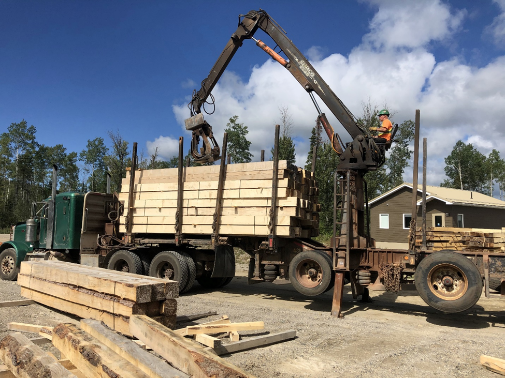 The mill purchases most of its volume from Resolute Forest Products in Thunder Bay. Resolute’s mills are tooled for specific, smaller log sizes so Papasay purchases their oversized logs, anything 18 inch and above, at fair market value.

Sixteen-inch logs are brought to the mill doors via 310SG John Deere backhoe. Another smaller Toyota forklift positions the logs at the infeed of one of the mill’s two Wood-Mizer portable hydraulic sawmills, an LT40 and LT50.

“The LT50 has lifting arms that take the log, bring it up on top of the cradle. And then there are log turners and pins getting that log semi level and straight. Once straight, the operator locks that all in and starts to cut that log,” Gladu said.

The LT50 can handle up to a 30-inch diameter log and can cut a maximum of 28-inch width and 17-foot length. The LT40 is a more manual version of the LT50, but can cut similar max diameter, width, and length logs. Both machines are built by Wood-Mizer in the U.S.

After the sawline, conveyors bring the slabs to a 250 Wood-Mizer edger that removes the bark and wane from a 3-inch to a 15-inch board to produce a finished product. Boards are then pilled according to sizes in their lumber yard, ready to be shipped out as rough-cut, green lumber.

At the time of writing, Gladu was overseeing a concrete pour that will be the foundation of a recently purchased Nova kiln chamber to house their KDTL 685 dry kiln.

Once the kiln is up and running, the mill will be venturing into value-added products. Papasay has purchased a Gau Jing Machinery GN-6S23 planer moulder that can produce dimensional lumber, tongue and groove, and other products where there are opportunities. 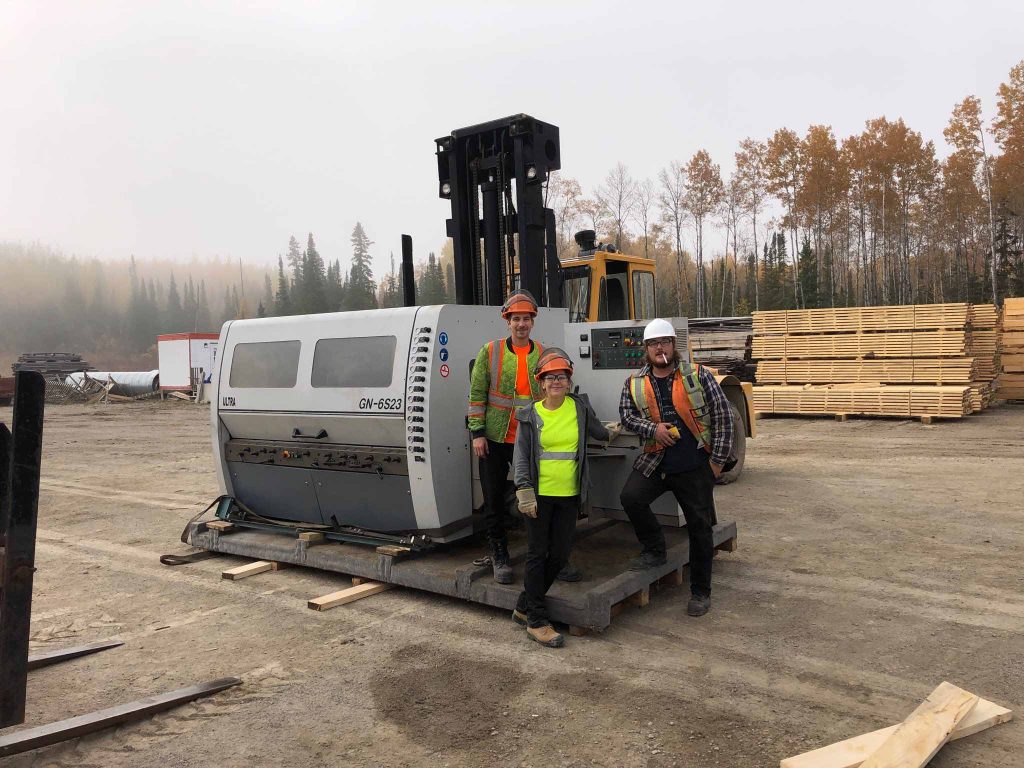 Papasay plans to install a custom-built Baker Products sawline in the coming year that will quadruple their daily production. But, with employment an ongoing challenge across the industry, the mill is designed to keep operating whether they have five employees or only two on shift.

“With the Baker line, you can operate it with fewer people. You can still run it with two people. We’re not going to shut down because we don’t have a full workforce. Flexible and nimble is the two terms we aim for,” Hatton said.

Papasay Value-Added Wood Products has two business plan goals. The first is to increase production numbers to meet the needs of larger rough-cut, green lumber projects in Northwestern Ontario. The new sawline will go a long way to seeing that happen, Hatton said.

The second goal is diversification of their product line to produce more value-added products with the new kiln and the planer moulder operating on site. 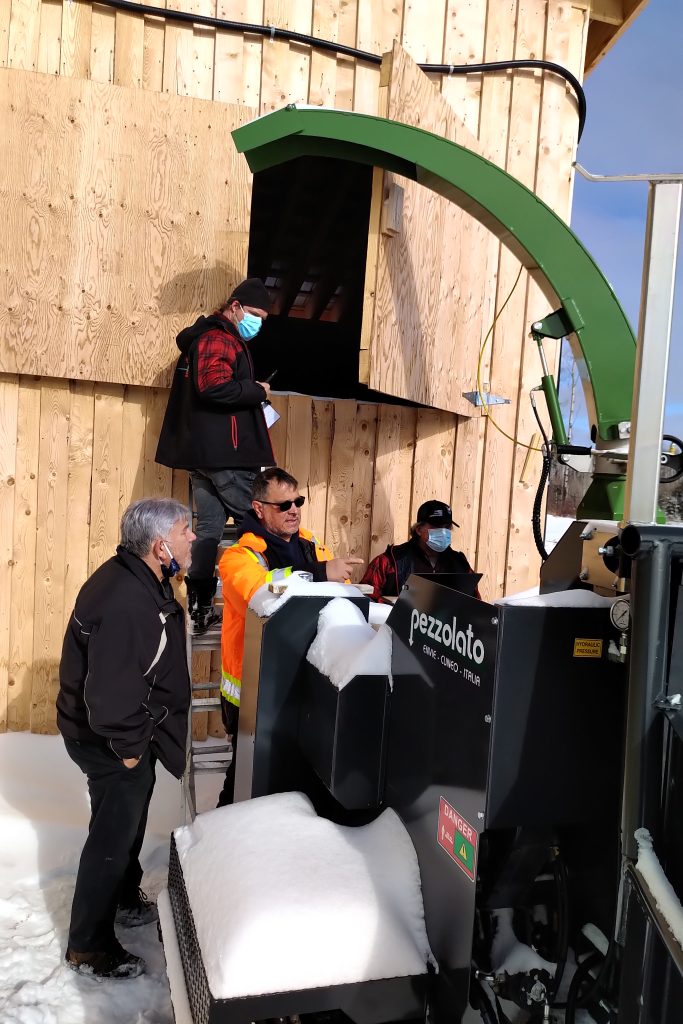 A consistent priority for Papasay has been the production of lumber and value-added wood products for building homes in the new BNA community, as well as in neighbouring First Nations. So far, they have built two duplexes, three houses, a small health centre and a greenhouse. This is just the start. Three more houses are in the works and the community is making plans for a biomass district energy system to heat the buildings from sawmill residuals.

“We can use the residue from the sawmill to heat the homes and lower heating costs for the members. It’s all interlinked,” Hatton said. “I use the word anchor project for the sawmill because it’s a foundational project. BNA 100 per cent owns it, controls it, drives it, and the whole point is to redevelop the community that was destroyed. It’s almost symbolic.”

Gladu describes a heartwarming moment when an Elder set foot in a new house on BNA land for the first time in 2018. “One of our Elders walked into one of these homes, basically in tears, saying ‘I never thought in my lifetime I’d be back in my community,’” Gladu said.

“For me, the end goal is that we’re on the community, we’re getting the material from our Lake Nipigon forest, we have our band members cutting it (with a few other First Nation members), drying that material, creating it and selling it to build our next home. That’s the glory right there,” he said.