Canadian Forest Industries sat down afterwards to ask a few questions of our own.

What is the latest on Resolute’s planned sawmill in Atikokan, and what role will this facility play in the company’s future?Have the technology or equipment vendors been selected?

We are very pleased to be able to go ahead with this project, which will allow us to optimize the fibre in the area. This $50-million dollar project is going to employ about 90 people. What is interesting about the Atikokan sawmill project is that First Nations are going to be a key part of it. There are opportunities for jobs and additional business, such as residual chip transportation and wood waste. There are seven First Nations communities involved, and this is a new approach for Resolute to get closer to First Nations.

As far as plans for the new sawmill, we have equipment that we removed from our Nova Scotia mill that we are going to reuse, as well as surplus equipment from other mills. We are very confident that, with the technology that is going to be installed at this random length mill and our expertise on the lumber side, this is an opportunity to improve the profitability of our sawmill business.

Are there plans for upgrades at any of Resolute’s other mills?
We’re always looking for opportunities, including new technologies, such as biofuel. We have a wood pellet project that is going ahead in Thunder Bay. We are also looking at ways to use the lignin from our mills, working with FPInnovations. It’s going to take time, but I think within the next five years we’re going to see products that we’re going to be able to sell on the market, and I think it’s a peek into the future for the forest products industry.

With demand for lumber in the U.S. on the rise, how does Resolute plan to meet this need? Does the company have some elasticity in its current production levels and fibre supply?
I don’t think there is much more additional wood that we can get. We’re going to have to optimize the wood allocation that we have and make sure that our sawmills, through wood recovery, use less fibre to produce a thousand board feet of lumber. We are also going to restart the Ignace sawmill in Northwestern Ontario. As well, instead of chipping wood in the bush, we’re going to bring the logs to our sawmills and have residual chips for our paper mills in Fort Frances and Thunder Bay, which we feel is the optimal way to use the fibre allocation. Most of the mills that remain open are now among the most competitive in the North American industry, and with active involvement and support from employees at all levels and from the communities where we operate, we intend to be around for the long term.

What are the biggest issues facing Resolute when it comes to sustainability and how it affects its operations as a for-profit business?
Resolute will continue to have a strong commitment to sustainable forest management. When you look at certification, we had a commitment to get to 85% FSC-certified by 2015 and we are already at 65%. We are now the largest FSC certificate holder in the world.

The fibre use in our Canadian products originates mainly from the boreal forest, which is among the most carefully managed forests in the world. In fact, a Yale University study singled out Canada’s forestry laws and regulations as being among the most stringent in the world. It’s also worth mentioning that less than a quarter of 1% of the boreal is affected by harvesting each year. In Ontario last year we planted our one billionth tree – that’s billion with a “B”, same as the deficit.  And that number doesn’t include reforestation achieved by things like aerial seeding and natural regeneration.

As an industry, since 1990, we have invested $9 billion in becoming even greener. Today, roughly 75% of the paper being used in Canada is recovered. As well, integration between pulp and paper mills and sawmills allows us to optimize the use of the fibre that is harvested. Resolute is also committed at all levels to improved energy efficiency, the use of hydroelectricity, and switching from fossil fuels to cleaner renewable energy sources like carbon-neutral biomass. In fact, around 70% of our energy requirements come from renewable sources. We also use alternative fuels like methane from landfills, used oil and tire-derived fuel.

As production ramps up, the industry is concerned with attracting and retaining talent. What steps is Resolute taking to be an employer of choice? Are there certain sectors of the population that you think Resolute, or the industry in general, should be targeting?
We know that the forest industry provides livelihoods for thousands of families and a viable economic future for communities across the boreal. In many of these communities, Resolute’s operations are the anchor for the local economy. We’re going to hire approximately 2,000 new employees to replace retiring workers over the coming years. We have programs to attract new employees, but the difficulty over the last few years was that people looking at the forest products industry were asking, “Are they going to survive?” Now that we are on track and companies are profitable, people see that there is a future.

Our initiatives to involve First Nations will ensure they will have the skills necessary to have a successful future with our company. That’s why we have partnerships with numerous First Nations groups near our operations that aim to ensure co-operative forest management and even business partnerships. In Thunder Bay, for example, we have had a partnership with the Fort William First Nation since 2003 related to a sawmill that employs over 170 people. In Atikokan, this new $50-million facility will create approximately 90 jobs in the community, with additional employment associated with construction, as well as indirect positions for hauling lumber and residual wood chips when the project is completed.

I am particularly pleased with the direct involvement of First Nations, and the opportunity for shared economic benefit that this represents. 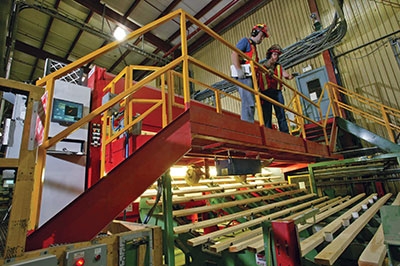 In early April
Print this page