April 30, 2018 - The BC Saw Filers Association drew an impressive crowd of around 160 registrants to Kamloops, B.C., April 26-28 for what is being called the largest convention of its kind in North America. It’s an encouraging sign for the filers who gathered to discuss not only the latest technology for their trade, but the need to attract new talent. 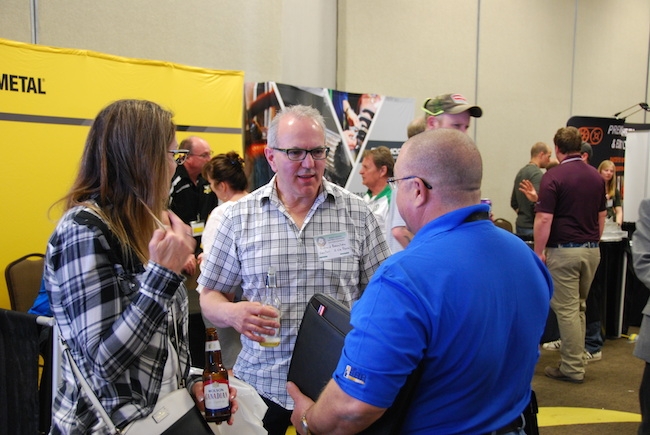 For the first time the convention trade show ran two full days, giving 30 vendors filling 60 booths needed time to show off their latest offerings for the filing room. (Read about some notable products on display.)

Josh Bergen with PGMR was among the first presenters of the full sessional day. He spoke on the importance of maintaining saw guides, cautioning that guides, while critical to proper machine accuracy, are often overlooked components in the mill. Maintaining guide tolerance, Bergen said, involves several components:
• Machine cleanliness
• Regular guide inspection
• Guide maintenance to ensure all parts of the guide are intact
• Proper anodizing to extend the life of guides
• And upgraded equipment

Modernizing equipment is not only important for running the mill, but also for attracting new employees, Bergen said. “When new people come in and they see old equipment it’s hard to attract young talent to our industry. When they come in and see new grinders and tippers, you’re more likely to interest them,” he said.

Richard Comer, president of saw plate manufacturer GrascheUSA, introduced his company to the B.C. filers and spoke about what goes into building a saw body. The 15-to 22-day process involves laser cutting, surface grinding, multiple rounds of annealing and several other machines to ensure the plates meet stringent quality standards.

Luxembourg carbide manufacturer Ceratizit’s Jean-Marie Greiveldinger also introduced himself and his company. He explained the manufacturing process for carbide tips and announced a new partnership with HMT Machine Tools Canada, based in Surrey, B.C.

HMT was another manufacturer to introduce a new product at the convention. Corey Guindon presented a soft launch of their Smart Track bandsaw tracking system that easily monitors saw positioning. “It’s meant to be a sleek, simple solution for you guys to increase feed speed, and provide less stress on the bandsaw,” Guindon said. “You can get it in that sweet spot and it stays there.”

HMT partnered with FESTO to build the system, which uses multiple cameras to make up a sensor roughly 2x2x3 inches. Housed in a compact casing, the system is positioned about 18 inches away from the outside cutting edge of the band saw – far enough away that it does not interfere with saw changes. HMT tested the Smart Track at Interfor’s Adams Lake sawmill, an hour’s drive northeast of Kamloops. Guindon said they are able to tweak the product to individual sawmill needs. (Continued below gallery.)

Nick Barrett with SiCam system presented on the value of measuring and tracking data at the sawmill and in the filing room. “It’s not always about buying a brand-new machine; we can do a lot more with what we have,” Barrett said. By measuring and tracking data, particularly long-term trend information, a mill can determine the value of new solutions, and the costs versus benefits.

SiCam has introduced closed-loop systems into mills, which allows them to make minor adjustments on the fly. The system can reduce machine downtime, but Barrett cautioned that operators still need to address alarms rather than rely entirely on the system to readjust.

An update on the Thompson Rivers University (TRU) technical training school for saw filers, and the certification testing from ITA BC (Industry Training Authority BC) was the final presentation of the day.

ITA’s Kristen Holliday presented encouraging numbers of current saw filing apprenticeships and 2017 testing results. As of April 1, there were a total of 187 saw filing apprentices registered, 125 of which are registered as active with the ITA. In 2017 there were two cohorts of about 15 students in each of the three levels of classes offered: level 1, level 2 and benchperson. Average pass rates were between 91 and 93 per cent.

TRU’s new sawfiling instructor Tony Narciso introduced himself to the audience and answered questions about program numbers, including concerns about the level of interest from the next generation. “Retirement is a fact. There are a lot of guys retiring and we need to fill that gap,” Narciso said. “You don’t create a filer after three years of school. It takes time to train them to the level we need.”


Related
BC sawfilers take in new technology at 2018 convention
The new reality for sawfilers
iBlade measures saw blades with four cameras
Saw Filing 101: Harmony in the file room, and the mill