June 6, 2016 - Back in the fall, Columbia Forest Products mills in the U.S. were producing such a high-quality veneer that the company was having to ship it north to its mill in Hearst, Ont. to keep up with Canadian demand. The demand was so great, that Columbia ended up investing $15 million into its production facility in Hearst to upgrade the plant’s core-peeling capabilities with the same Meinan state-of-the-art peeling technology used in its U.S. mill operations. 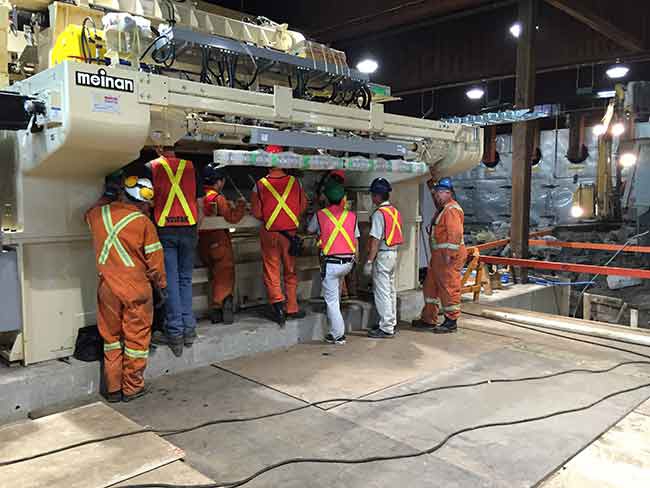 When asked what the main drivers behind the investment were, Levesque’s first answer was the customer.

“To start with, it’s customer satisfaction,” he says. “We’ve installed similar lathes in our American operations. Two in the east – in Old Fort, N.C., and Craigsville, W. Va., and a smaller version out west in Oregon. The customers in Canada have been subject to the improved quality of the veneer peel from these lathes so they now request it. Now the whole panel [in Hearst] is produced with this high-quality veneer so it will satisfy customers’ needs better.”

Another reason for the investment was to improve the long-term viability of the Hearst mill.

“If you satisfy your customers, they stay with you for the long term,” Levesque says. “Also, efficiency of this lathe is much better. It consumes a lot less logs so our resources go a lot further. We want to make sure that we’re here for a very long time and the less natural resources you need, the better a position you are in.”

When deciding how to upgrade its facilities in Canada and the U.S., Columbia flew a team of engineers and executives to Japan where Meinan peeling systems are engineered and fabricated. They were impressed by the attention to detail given to the Meinan system, which includes assembling, testing and disassembling the entire 200-foot-long lathe line prior to shipping it to Canada.

“When you hear those numbers at first it’s hard to believe,” he says. “But we sent a few truckloads of logs for testing at our U.S. mills, and I went to observe and counted what came out, and it’s true.”

Overall efficiencies at the plant have increased substantially since the installation of the new lathe line.

“The green end will run about 25 per cent less time to make the same amount of panels,” he says. “We’ll actually need to run the lathe on two shifts – 80 hours per week – to fill the current capacity of the mill. The rest of the mill is running on three shifts, 24 hours a day.”

One big reason for the increase in efficiencies is the quality of the veneer on the new lathe, which is the finest the mill has ever produced.

“The smoothness of the veneer is tremendously improved,” Levesque says. “So the quality of that veneer, as it flows through the rest of the mill, just improves the efficiency of everything. The thickness tolerance of each piece of veneer is so much better that the resulting panel is much better. The efficiencies weren’t just on the green end, they have an impact on the whole mill.”

Levesque says that there is potential for even better results than the company is currently experiencing from its latest investment. Good news for the 200-plus people employed at the Hearst facility and all of the loggers, truckers, and associated industry workers in the area directly or indirectly impacted by the success of the plant.