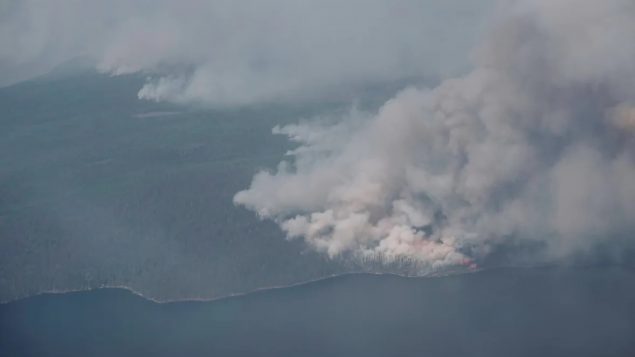 An aerial view of the Chute-des-Passes fire last month which has burned hundreds of square kilometres of forest in central Quebec. The flames and billows of smoke could be seen spreading throughout the region. (Submitted by SOPFEU)

As Quebec continues to see temperatures rise and lands drying, residents who have fled to self-isolate in their cottages and secondary homes far from large COVID-19 hit areas are believed to be part of the cause of Quebec’s ongoing forest fires.

Almost 61,300 hectares of forest has been destroyed by fires in what is being called Quebec’s “intensive zone,” reports the CBC. Quebec’s intensive zone hasn’t lost more than 60,000 hectares in one year of forest fires since 2010 when 223,358 hectares were burned. The amount of forest fire losses Quebec sees on average during this time of year is 33,600 hectares, according to Quebec’s forest fire prevention organization, Société de Protection des Forêts Contre le Feu (SOPFEU). There are currently more than 537 fires burning in the area.

Fires have been known to come from careless acts from humans. “As many as 90 per cent of the fires this year have been caused by human-activity,” SOPFEU spokesperson Cathy Elliot Morneau told the CBC. Morneau added that many who self-isolated in their cabins decided to burn their waste, contributing to this years wild fires.