What do you do if your bid to buy a failing but respected sawmill machinery supplier falls just shy of winning? You start a sawmill machinery company of your own. At least that’s what two of the groups vying to buy the now defunct Coe Newnes/ McGehee (CNM) this past summer did. A group of long-time CNM key employees have come together with Austrian sawmill gear giant Springer Maschinenfabrik and Italian saw-
mill optimization and controls giant Microtec to form a totally new venture, Microtec Industries North America. 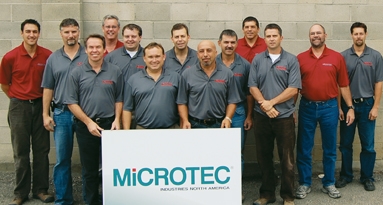 The Microtec Industries NA’s team out of beautiful Salmon Arm What do you do if your bid to buy a failing but respected sawmill machinery supplier falls just shy of winning?

“I guess even though our bid for CNM didn’t succeed, we had been bitten by the entrepreneurial spirit,” says Tim Gallant, who is sales & marketing manager with the new venture, and spoke to us in mid August between drywall work on the new offices and heading down to the IWF 2008 show in Atlanta to introduce the new company. “We’ve just hung the sign over the door, and have office space and board room ready as part of our 25,000 ft2 facility, but we’ll be moving fast from here.”

“We’ve got a very broad range of talent and experience,” Gallant explains. “We have a good group from controls, a mechanical installer, several from optimization, myself in sales, some chop saw expertise, administration, etc…”

Full Line to Come
In time, Gallant says Microtec Industries NA will have the full line of gear from both Springer and Microtec, a line that runs the full gamut from lumber handling and processing to controls, optimization, and some of the leading edge technologies coming out of Europe, like CT scanning. The idea is to take this cutting edge gear, and use the local expertise to make sure it is suited to North American needs and realities. For starters, the company has a few products in mind to launch their name and get the business flowing.

“The company has a very advanced optimized chop saw system – Golden Eye – that will go head-to-head with any out there, and is among the most ready of the product line for North American conditions. Another product for the near term is the linear planer optimizer, and we have people on board with a lot of experience in this application.”

In fact, Chris Wells, who headed up the LHG program at CNM is a team member with Microtec Industries NA. The first Golden Eye based linear planer optimizer will be available in Q1 2009, Gallant adds.

Beyond that, Gallant says they will be making a quick move into the controls side of the business as well.

“Long term, the plan is to have the full range – and this is a massive company and product line. We also see having full training facilities here in Salmon Arm as well. But for the outset, we need to be careful, and we want to service everything we sell out of North America. So we will focus on these core products, and grow from there.”
These core products include:
•    Viscan MSR strength grader.
•    Viscan Plus MSR strength grading device with x-ray supplement.
•    Golden Eye linear lumber scanner for the reman market (chop saw optimization).
•    M3Scan moisture meter
•    Optiside growth ring scanner and turner.
•    Log Eye log scaling.
•    Variosort lumber tally.
•    Lumber handling controls and systems (new and upgrades).
•    Glulam beam processing systems.
•    Mechanical and controls servicing of solid wood processing machinery.
•    Complete mechanical lumber handling systems.
•    Linear planer lumber grader for dimension lumber (available Q1 2009).
Plans are also in the works to have testing facilities on site this fall where North American sawmillers can send their own lumber to test the Golden Eye linear lumber scanner for both reman and planer optimizer, as Gallant explains. “This is like the Coke-Pepsi Challenge – We are willing to go head-to-head with anyone with these products. These will be North-Americanized versions, so mills can send their lumber for testing, and then compare it with other systems. That’s the plan.”

But for now, Gallant has a plane to catch, and a company to help launch. In an industry that was starting to lose a little too much choice for larger sawmill projects, this is exactly what the doctor ordered.