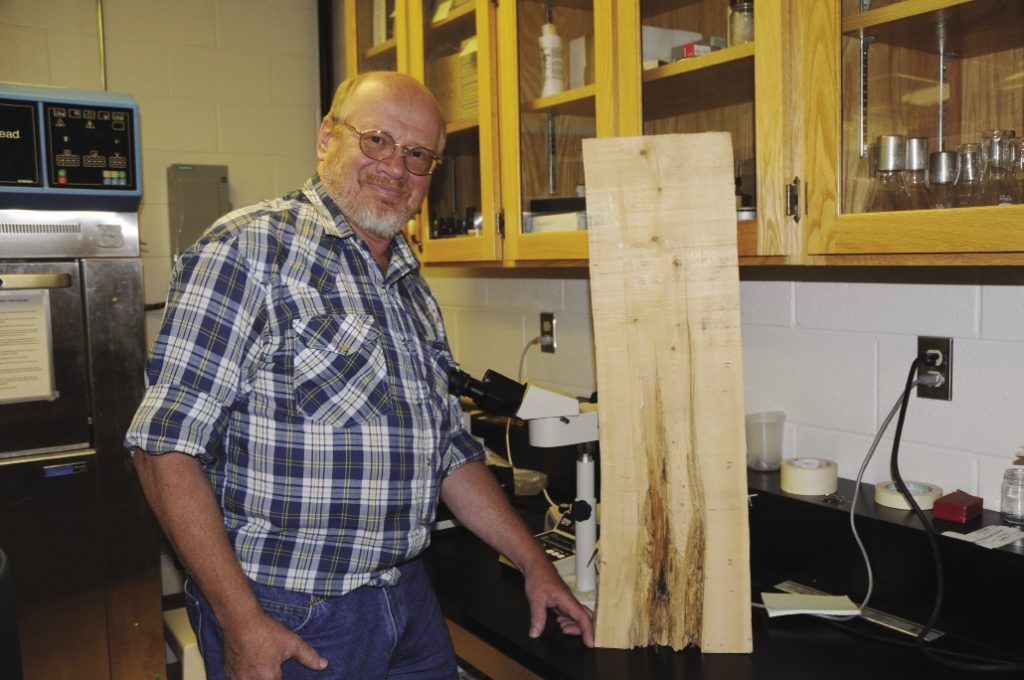 Why are the roots and butts of balsam fir trees rotting? What is this pest that is causing such devastating losses in balsam fir, as well as damage to black and white spruce?

Warren, along with other researchers at the CWFC in Corner Brook, N.L., is studying the possible causes and effects of root and butt rots in pre-commercially thinned balsam fir stands.

Part of the challenge in studying these fungi is their ability to go undetected – with no outside signs that they are already causing tree damage.

“It used to be a long, tedious process just to isolate and identify these fungi,” recalls Dr. Warren, forest pathologist / mycologist, adding that new tools and techniques are turning his research lab into a CSI lab for forestry. “Today, it’s a much more efficient process using molecular techniques that greatly increase the speed and accuracy of fungal ID.”

In the lab, Warren and his team are helping to identify the root diseases and the vast variety of white and brown butt rot fungi, as well as
their impacts.

Starting Point
The research involving butt rot began back in the mid 1990s when Warren was first asked to identify the problem. A look at older stands of balsam fir in central Newfoundland that were being thinned a second time, revealed the butt rot.

In fact, historical research on butt rot from more than 20 years ago has led to more questions than answers – questions like: Do pre-commercially thinned stands react differently to this forest pest than undisturbed stands? Does thinning have an effect on the incidence of root and butt rot? How do these fungi impact on wood fibre quality?

Sites that are over-stocked with young balsam fir may be thinned to encourage the trees to grow faster with fewer branches and straighter stems, but does pre-commercial thinning have an effect on these forest pests?

“What intrigued me was this increase in root disease and butt rots in these stands,” says Warren, whose research identified that thinned sites have a greater incidence of root and butt rot diseases than is seen in natural stands.

“Our research is trying to identify the various factors responsible for root and butt rot increases and how these factors may affect the fungi responsible for the problem,” he adds.

“The aim is to reduce the loss of tree wood volume and to improve fibre quality.”

The Findings
Early results show that although thinning reduces competition and allows for better initial growth and form in balsam fir trees, the damage from root and butt rot is happening earlier. Trees may need to be harvested at much earlier ages than originally planned in order for forest managers to maximize the amount and quality of the fibre.

“With this research, the ultimate goal is to assist forest managers to get the best yield possible from this forest fibre resource,” states Warren.

An important part of the science of fibre, Dr. Warren’s research looks at current levels of fibre loss and future effects of the forest fungi on
these trees.

Studies have shown that many factors play a significant role in the presence and severity of root and butt rot such as the age of the stand, both at the time of thinning and at present; the amount of thinning; and other factors currently being investigated such as site moisture, fertility and location.

And although many of the major disease and butt rot fungi have been identified, there are still many more unknown to science. The CSI of forestry continues.

Related
Trees Rising From Depths of Volta Lake, Ghana
All Smiles at TLA
SFI Continues to Grow
Logging the Future