Oct. 11, 2016 - The developers of a CT scanner for whole tree logs have received the 2016 Marcus Wallenberg Prize. The prize winners, Alexander Katsevich and Federico Giudiceandrea, received their diploma from the hands of His Majesty the King of Sweden at a ceremony in Stockholm, Sweden, yesterday. 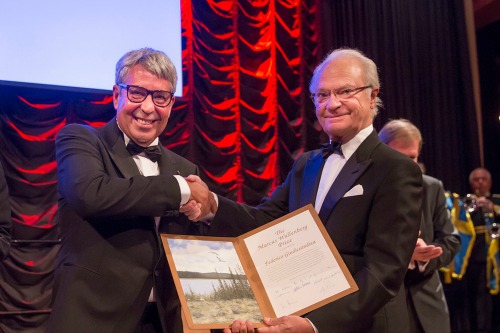 Computed tomography, CT, is nowadays invaluable to diagnostic imaging in medicine. The method has also been introduced to many areas of industry. The output value of the sawn timber products increased dramatically when medical scanners were used in a research project in a sawmill. Industrial realization was however hampered by the slow speed of the process.

A high speed X-ray based online scanning machine was built due to the findings of professor Alexander Katsevich, University of Central Florida, USA, and Federico Giudiceandrea, CEO at Microtec, Brixen, Italy. They are awarded the 2016 Marcus Wallenberg Prize of SEK 2 million for the discovery.

The non-destructive scanning of round wood has made online optimization of log usage in the sawmilling process possible. Knots, resin pockets, tree rings, cracks and rot can be identified before the timber is sawn. The wood density can also be determined.

The introduction of this new technology marks the beginning of a new era for the sawmill industry. The groundbreaking research and innovative implementation have opened new horizons, facilitating further optimization of the sawing process, says Marcus Wallenberg, chairman of the board of the Marcus Wallenberg Prize.

Computed tomography, CT, is an imaging technology that produces three-dimensional, 3D, representations of objects, based on multiple scans of the object from different directions with penetrating X-ray radiation.

In most modern industrial and medical CT scanners the X-ray is emitted from the source in a cone beam geometry, and the images will be reconstructed when the object is moved through the beam. Either the object or the detector is turning in spirals through the process.

The algorithms, or data calculations, to obtain the 3D-pictures are approximate in their nature but reliable for small cone angles. Wider cone angles result however in blurring images.

The breakthrough by Alexander Katsevich was to find an exact analytical reconstruction algorithm, which is known today as Katsevich’s Algorithm. The algorithm was subsequently further refined not only to solve the cone-beam problem but also to be better suited for situations where fast movement of tree logs is necessary.

Payback time in a year

Federico Giudiceandrea collaborated with Alexander Katsevich in implementing the Katsevich Algorithm with the applications of CT scanning and was ultimately successful in building a prototype, which no one thought would be possible. It has been further developed and marketed worldwide. Wood industries in Chile, the US, Germany and France have invested in CT scanners to make the most of the round wood resource. The log scanner has an outstanding capacity compared to other CT-scanners. It has a band speed of 120 meters per minute, to keep pace with modern sawing lines. The best medical scanner has a band speed of 3 meters per minute. In modern sawmills where 3D scanning of the log is used, an approximate of 10 to 15 percent increase in value of the output can be derived. A potential increase of 20 to 25 percent is possible if all the advantages of having access to the internal features of the timber are realized. An investment in this kind of equipment is likely to have a payback time of not much more than a year for an average-sized sawmill.

Grading has been the only realistic way to keep quality within desired limits. The CT log scanner however enables a way of controlling the quality of the output from a log by directing the sawing pattern. This creates new possibilities for wood as an engineering material, says Carl Johan Johansson, former member of the Selection Committee of the Marcus Wallenberg Prize. The laureates Alexander Katsevich and Federico Giudiceandrea will receive the award from the hand of His Majesty the King of Sweden at a ceremony in Stockholm Monday 10 October 2016.

Federico Giudiceandrea
Federico Giudiceandrea was born in 1955. He graduated in electronics from the University of Padua, Italy, in 1980. His academic background is in bi-dimensional signal filtering. This brought him in contact with the field of artificial vision. The year he graduated he also founded the company Microtec with two associates – one an expert in optics, the other an expert in business. In 1995 the company had developed an X-ray scanner for sawn timber. The company’s first X-ray scanner for roundwood came in 2007, and in 2014 came the first multi-scanner for quality assessment of fruit. Dr. Giudiceandrea is the CEO of Microtec. He has received many awards, among others the Schweighofer Prize in 2013.

Alexander Katsevich
Alexander Katsevich was born in 1967. He graduated in applied mathematics at Moscow Institute of Oil and Gas in 1988 and got his Ph.D. in mathematics at Kansas State University in 1994. He worked as a research assistant at the Institute of Terrestrial Magnetism, Ionosphere and Radio Wave Propagation of the USSR Academy of Sciences between 1988 and 1990. Between 1996 and 2002 he was a Postdoc Fellow at Los Alamos National laboratory. From 1996 to 2008 he was an assistant and then associate professor at the Mathematics Department of University of Central Florida, UFC, and has since 2008 been a full professor there. Since 2011 he has also served as CTO of iTomography Corporation, a spin-off from UFC that he co-founded to develop and commercialize new and existing CT technologies. His research deals with tomography, radon transforms, medical imaging, microlocal analysis. He has received several awards, among others the Best paper in Tomography Award at the IXth International Conference on Fully 3D Image in Lindau, Germany, in July 2007.

The Marcus Wallenberg Prize
The purpose of the Marcus Wallenberg Prize is to recognize, encourage and stimulate path breaking scientific achievements, which contribute significantly to broadening knowledge and to technical development within the fields of importance to forestry and forest industries. The prize will be awarded at a ceremony in October in Stockholm, Sweden.