Fell. Bunch. Repeat. Making that cycle relentless is key for today’s contractor. It’s also the inspiration behind John Deere’s new M series track feller bunchers and harvesters. That’s not surprising, since that inspiration came from you, the Canadian logger.

The manufacturer leaned heavily on its global Customer Advocate Groups (CAGs) for the design, build and test processes for the new machines. As a result, it got a lot right — from big items like tractive effort, balance, flow, swing torque, visibility, access, fuel capacity and boom performance, to such details as instrument position, storage and LED lighting.

Launched in mid-January at a press event in Langley, B.C., the 800 and 900 M series are already shipping to clients. According to vice-president of forestry at Deere Marty Wilkinson the series is the company’s largest forestry investment since the Timberjack acquisition, with over 250,000 design and test hours spent on the project to date, as well as a major investment in manufacturing to build the new units.

He adds that the key investment was in the customer feedback loop. At launch time, prototype and early production machines had over 11,000 combined operating hours.

Production boom
The most obvious change to the machines is the boom, which sits farther back than older models and is dramatically simplified in look and operation. Hoses and wires are tucked up inside the boom and through the nose, although the key improvement is invisible.

An available Rapid Cycle System (RCS) allows for up to 35 per cent faster cycles thanks to a single boom joystick and adjustable automation that reduces operator input and fatigue. RCS combines automated felling-head arm cycling with simple boom control, and can be turned on or off with one button. Configurable for operator skill level or conditions, RCS is also a good training tool to get recruits up to speed.

“One of the main comments we’re getting back from loggers using the system is that it really narrows the gap between their top operators and everyone else,” engineering manager for track bunchers Jonathan Hunt explains as we run a machine walk-through on a JD 853 on a customer lot south of Langley.  “The biggest difference is with the newer or lower-skill operators, where the automation and simplified approach increase production and reduce machine wear and tear,” he says.

Also boosting production is the boom set back, which dramatically boosts visibility out the right side. That, plus a cab forward design, increases visibility by 44 per cent — a massive improvement that is obvious when sitting in the cab.

Fuel Capacity: Up 50 per cent to 230 gallons, so machines can now run 24 hours depending on conditions.

Power: Engine power has been increased 25 per cent to 300 hp, the basis for better multifunctional performance. That is twinned to a high-torque swing option (standard on harvesters) and
closed-loop hydrostatic drive that is designed to improve multifunctioning on steep slopes.

Tractive effort: This has been improved by up to 45 per cent.

Cabin comfort: Space has been bumped by 17 per cent, with dedicated storage space and fully-adjustable armrests for fingertip control.

Access: Service points have been amalgamated to ensure work gets done, and an optional undercarriage-mounted toolbox adds to that efficiency. John Deere’s ForestSight and Ultimate Uptime are available.

Production units are already being shipped, but feedback from loggers on test units has been positive. “It’s a pretty incredible machine,” Mark Maenpaa of K&M Logging in Thunder Bay, Ont., says — currently running a 700 series. He was involved in the CAG process from the early days at the Deere factory, and was as impressed with that as the finished product.

“We reviewed early designs across the whole machine, provided detailed feedback in focus groups, then a year later saw the first prototype and provided feedback on that, and then later got to run an 800 series buncher in big timber and slope in Oregon,” Maenpaa says. “That machine was very neutral in terms of balance and the visibility was far better than anything I’ve seen. I can’t wait to get my hands on one for a longer trial run here.” 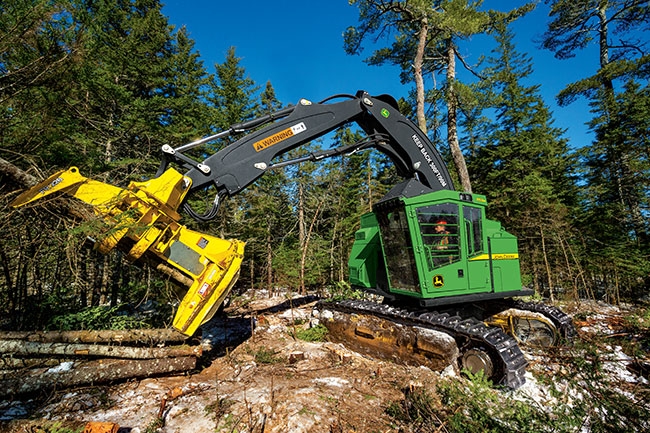 An 853M works a customer test site. The combination of 44 per cent more visibility Fell. Bunch. Repeat. Making that cycle relentless is key for today’s contractor.
Print this page