The new Logset 10F forwarder made its international debut this fall when the Finland-based company and its UK dealer, RJ Fukes Forestry Services, brought the machine to APF 2010, the UK’s largest forestry, woodland and arboricultural show which this year attracted 16,700 visitors.

“Despite the challenging times facing the industry, we have continued to invest in our research and development and the new Titan 10F is the result of our efforts,” explains Pasi Nieminen, Logset’s managing director. “The 10F with a load capacity of 18 tonnes, will complete our Titan line of forwarders, which also includes four other machines ranging in load capacity from 10 tonnes to 15 tonnes.”

The 10F features the new Logset TOC control system, which provides optimal fuel economy and maximum productivity. The TOC system offers versatile driver settings  and controls the machine’s main functions, such as the engine, crane, transmission, lights, air conditioning and cruise control, along with some optional functions such as computers, cameras, central lubrication and a mobile phone controlled engine heater.

“Robustness and reliability were optimized in the design and structural integrity of the Titan 10F,” adds Nieminen. “These machines have been built with worldwide markets in mind, including the harsh conditions found in Canada and the United States, Northern Europe, Russia and Latin American.”

Built to withstand the harshest environments, the Opticom CC-02 camera can operate in temperatures ranging -50C to +50C, and the tri-axle mounted camera is vibration resistant, and waterproof  IP68 rated. It carries a 5-year warranty on the camera and a lifetime warranty on the HD die-cast metal alloy housing.

Power options include Caterpillar, Cummins or John Deere diesel engines, ranging from 535 to 630 horsepower. The 3090 Track can accept material up to 24 inches in diameter, and combined with a stationary high-flow discharge system, it can produce as much as 80 tons of chips per hour. 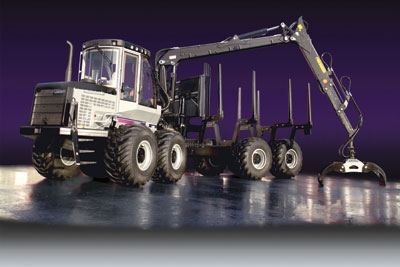