Oct. 28, 2014 - Reid Lind, a logging contractor from Princeton, B.C., is used to driving Caterpillar skidders in the forest. He estimates his family has been running Cat skidders for the better part of 30 years.

“We drive mostly Cat equipment, we probably have about 15 or 16 pieces.”

So when Lind was given the opportunity to be involved with the design of the new Cat D series skidders, he took advantage of the opportunity, much like his father had done 20 years earlier for the original 525.

Caterpillar began the process of building its new forestry skidder 4 ½ years ago. It looked to its distribution network across North America to engage several logging contractors to find out how it could build a better machine for the forest.

That included multiple trips to the company’s production facility in LaGrange, Georgia, just a few miles east of the border with Alabama. The facility was fitted with a 35,000 sq. ft. assembly line customized for the new skidder, which has the production capacity of three units per day at one shift per day.

Leid and his father own Lind G R (Mac) Logging Ltd., cutting wood for the Weyerhauser mill in Princeton: a mix of pine, spruce, balsam and fir from the B.C. interior.

Originally, Lind and his dad were given the 545D prototype to run. Lind mentioned that, in the very deep snow, the 545 still struggled a bit. As a result, Lind was given the larger 555D to work in some of the more difficult weather conditions in the B.C. interior. He was more than satisfied with the results.

“The 555 allowed us to run in a lot of snow, mud, adverse skidding. It doesn’t slow down as much. You fill the grapple and it goes.”

The climate Lind was running the skidder in was much like that of Allen Macsemchuk, a logging contractor from Kakabeka Falls, Ont. who has also been involved in the trials on the D series skidders. Macsemchuk previously ran a competitor’s machine, but jumped at the opportunity to be involved in the design and trials of the new Cat machine.

“The power and the hydraulics got my attention,” said Macsemchuk. “The pulling power, in general, has been great for our operation. It’s also a very comfortable machine to run.”

Macsemchuk is the Bush Operations Supervisor and part owner of Firesteel Contracting, a company his grandfather started in the 1960s. Firesteel does CTL 10ft. logs for the stud mill, and also has a chipping and grinding operation, both of which feed Resolute Forest Products in Thunder Bay. Firesteel does run several Cat machines as part of its fleet, purchased from the Cat Toromont distributor in Thunder Bay, but had not previously run any Cat skidders.

Mascemchuk has been running the 545D in the woods north of Thunder Bay and has been happy with the results so far. He has plans to purchase a 545D skidder once the trials are over at the end of 2014. 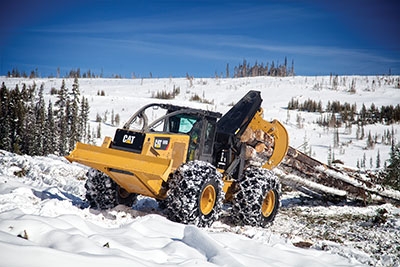 The 555 allowed us to run in a lot of snow, mud, adverse skidding. It doesn’t slow down as much. You feel the grapple and it goes.” – Reid Lind of Lind G R (Mac) Logging Ltd. in Princeton, B.C. Reid Lind
Print this page