It’s difficult to imagine a less aerodynamic tractor-trailer configuration than your typical square-nosed logging truck pulling an awkward load of timber behind it. Loggers love their classic model trucks with the big, square front end – aerodynamics be damned! 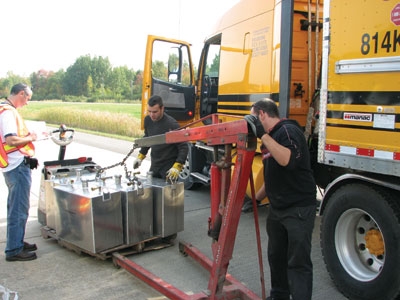 But with fuel prices continuing to escalate, aerodynamic fairings and fuel-saving devices are garnering a lot of attention. Admittedly, a lot of the best performing fuel-savers are not practical in logging applications.

Trailer side skirts, for instance, are too flimsy to operate off-highway, and wide-based single tires only now have the cut- and chip-resistance that logging demands. However, there are other options out there that are proven to improve fuel efficiency. By the same token, this industry has a way of attracting snake oil salesmen as well – and there are no shortage of devices being peddled that are worth little more than the mud on your tires.

Objective Testing
But how do you tell which products will live up to their promise and which won’t? Until recently, trial-and-error was the only way to separate the wheat from the chaff. But late last year, FPInnovations, Feric Division, and some fleet trucking companies (namely Robert and Cascades) leapt into the fuel efficiency testing game. The good news is that Feric has the resources and expertise to conduct fuel efficiency tests to SAE/TMC J1321 Type II standards. The better news is that thanks to some federal funding, the organizations are required to make their findings public.

First, a word on the testing procedures. The SAE/TMC Type II fuel efficiency test is considered the most reliable in the industry. Extreme care is taken in collecting the data – for instance, fuel is weighed, not measured by volume, to account for the impact ambient temperatures may have on density.

In the truck technology world, the SAE/TMC Type II test is considered gold. If you really want to weed out the snake oil salesmen, just ask them how their product performed in SAE/TMC Type II testing. If you get a blank stare in response, tell them to come back once they’ve done the test (preferably conducted by an independent third-party such as Feric).

Because of the credibility the SAE/TMC Type II test procedure carries in the industry, I was surprised the organizers of EnergoTest 2007 (the name given to this project) were able to find so many suppliers willing to take part in the test. After all, poor performance can be suicide for a product. Ten companies put forth their fuel-saving products for testing. And the results are in. 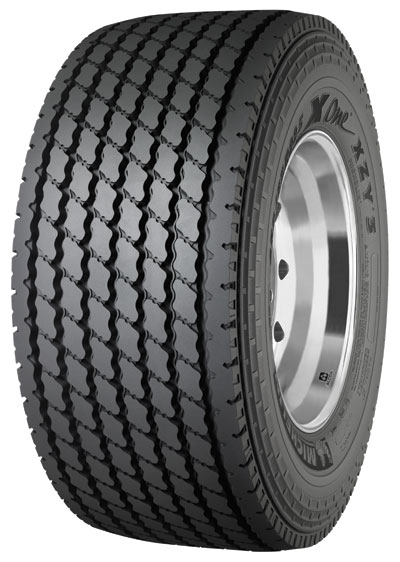 Perhaps the most pleasant surprise was the performance of Michelin’s X One wide-base tire. It scored a 9.7% improvement in fuel economy. This tire has only recently been released for off-road applications, and in fact the first models were brought to CONEXPO 2008 in Las Vegas in mid March. Michelin says its new X One XZY3 tire is an all-position radial tire designed for optimum weight savings and fuel economy in on/off road applications like log hauling. The tires use a special compound with extra chip and cut resistance, and variable pitch grooves are used to protect from stone drilling. Michelin adds that an aggressive shoulder design allows excellent traction in both wet and soft ground conditions. Perhaps the only hurdle to logging operations is that spares are big and heavy, and perhaps not practical to carry off-road.

The next best performers were trailer side skirts, which improved fuel mileage by up to 7.2%. Again, they’re not feasible for logging. Chip vans, however, could employ the skirts “as long as they’re sturdy enough for loading and unloading,” explained Marius Surcel of Feric. However, I also question their ability to stand up to the abuse they’d be subjected to at the mills – especially in the snow and mud.

I’ve spoken with general freight haulers who use the side skirts. They rave about the fuel savings, but also admit that even in their relatively mild operating environment, they still incur some damage in the winter.

On the other hand boat tails (wings that protrude from the rear of the trailer, reducing rear drag) could be used on chip vans. They proved to better fuel economy by between 2.6 and 5.1%, depending on the manufacturer. Not bad given some of the longer hauls we see today.

Then there’s the bizarre. Believe it or not, the Econoco, a device that “applies an electromagnetic field on the fuel line” scored a 3.4% fuel economy improvement. Goes to show you can’t dismiss some of the more unusual products out of hand.

The Quebec Transport Ministry got in on the action, conducting tests to determine the costs of under-inflated tires. Not surprisingly, tires inflated to 85 psi got 3.1% worse fuel mileage than those inflated to 100 psi.

Surcel admitted the theory wasn’t tested in as much depth as the organization would’ve liked – mechanical problems limited the test time. But don’t worry, he also said that Energo-Test will return. Already the group is soliciting participants for the next round of testing.

For the full results, visit  www.feric.ca and under Program Activities, select “EnergoTest 2007.”