As general manager Daniel Moshutz tells it, his pallet plant had more than a few problems with the old method of processing waste wood. For starters, the three-shift operation had one operator dedicated to the wastewood processing system on two of the shifts. The operation has spent a lot of time and money on employee retention over the past few years, and knows the value of a dedicated staff member. To have one sit at a noisy, non-productive machine centre was less than ideal. 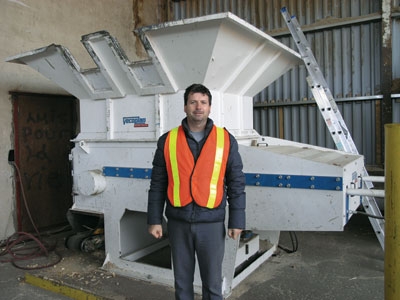 Secondly, the piecemeal system included several stages and more machinery and maintenance than the plant cared for. The operator would load trim ends and broken pallet pieces into a step-ladder, which then fed a conveyor, through a metal separator, into a 75-hp hammermill, and then through a 30-hp blower to an outside pile. That was a lot of gear, and horsepower, to manage a byproduct.

Last, but not least, the old system made a racket. Excessive noise is a concern for any operation, but as Moshutz explains his particular concerns, you can see high-priced condominiums, and a big challenge, just over his shoulder.

“We’re in the middle of the city, as you can see by the high-rise condos just around the corner,” he says, pointing to several brand new 10- and 15-storey buildings a few hundred metres away. “Those people don’t expect the kind of noise we had, from the hammermill, and also the blower system, which was really loud.”

Quiet Improvement
The answer came in March of 2007, when Montreal-based Laurentian Wood replaced the whole affair with a 50-hp ReTech RG52 Stretch rotary waste grinder from Vecoplan and a simple 2-hp paddle conveyor from the lumber and material handling experts at Tremzac. 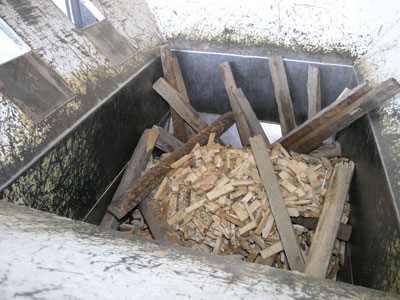 The new grinder is simple to load – the fleet of Toyota lift trucks simply dumps material into the funnel-shaped opening, which includes two fork-shaped slots for easy dumping. The 5-cubic-yard opening can be filled with material even when the grinder is not running, such as when the mill runs a third graveyard shift. The design also eliminates the need for a dedicated operator to babysit a complex infeed system. 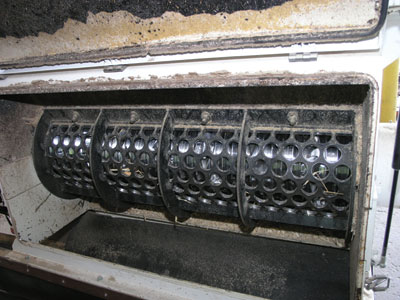 Moshutz adds that maintenance has so far been a breeze. The grinder’s rear door opens wide to allow access to the rear screen plate, cutting rotor, and four-sided teeth. From here, teeth can be rotated, or replaced as needed, although the general manager says this is not a common occurrence.

“The teeth last about 200 hours in this application, despite all this,” he says, pointing down at bent nails on the floor. “The system shuts down automatically when there is no material to process, so for us that means about once every 2.5 weeks that we have to turn the teeth, and maybe once every two months that we replace them. It is a good machine that way.”

Helping to keep maintenance down is a safety shut-off feature. If amperage suddenly spikes, meaning there’s something nasty in the machine, the system automatically shuts off before things get out of hand.

“You might get a broken tooth or two,” explains Peter Windmoller, a Vecoplan representative in Canada, “but it will not be a big deal. Similarly, it is set up to stop after three minutes without material, which is determined when the amp draw goes below a certain level. That can be set to 5 or 10 minutes, or whatever suits the operation.”

The low RPM, high torque action of the cutting rotor also means a very quiet operation compared to the previous wastewood processing option. Even when standing immediately above the hopper opening, you can have close to a normal conversation; walk around the corner and the noise all but vanishes.

From the grinder, processed material falls down to a belt conveyor that feeds a new outfeed system added in the fall of 2007. This includes the simple, low-hp Tremzac slant paddle conveyor feeding a bulk trailer. The fibre is then hauled to Tafisa’s particleboard plant some 120 km east in Lac Mégantic, QC.

Overall, Moshutz is very happy with the changes they’ve made to the plant’s waste wood handling stream. “It has been a very good investment for us,” he concludes, gesturing to the grinder. “We have 50 hp here instead of 75, and 2 hp on the conveyor instead of 30 hp on the blower, and it’s simple and quiet. From all the perspectives, it has really paid off. I’m very satisfied.”