For GM trucks the year 2010 is what’s known as a carryover and that includes the Heavy Duty GM truck segment. And while that means that there are no significant changes to the lineup, it also means that the component list that makes up these trucks is working well. Case in point is the Chevy Silverado 3500-series “dually” that I took for a 1,500-kilometre spin through Northern Ontario earlier this spring. My tester’s last major changes came about in ’08. Since then, fine tuning is all that’s been done on the spacious crewcab that seats five (or six with the front centre armrest folded up) comfortably. The diesel powertrain is also a carryover – one that is now in its fourth year of production (and ninth since its first introduction in ’01). But that kind of longevity has earned it a solid reputation as the upgraded 6.6-litre Duramax (325-horsepower and 660 foot-pounds of torque) coupled to the six-speed Allison automatic transmission.

For weight, I was a bit over gunned towing just a four-place enclosed snowmobile trailer for the last run of the year with my wife and boys on board; but, at perhaps 6,000 pounds, it smoothed the ride out at least – but never strained the motor. An interesting side note about the diesel emerged though because of the weather. Heading north, the norm had been mild March temps but when we arrived in Elliot Lake we experienced a brutal -30 C cold snap that certainly taxed the battery and the starting capability of the new high-pressure fuel rail system.  And while the Duramax chugged a bit on startup it did start – unaided.  This shows off (in an across-the-industry way) how far diesel technology has come – as little as 10 years ago this feat would have been impossible without a blockheater and ether.

The First 6600
The real start of this revolution in diesel tech dates to the intro of the first Duramax 6600. Built as a collaboration between GM and Isuzu motors, it incorporated a new variable nozzle turbocharger, new electronic control module, electronically controlled cooled exhaust gas recirculation (EGR) system and a common fuel rail that also used smaller, more precisely machined and positioned next-generation fuel injectors that injected its fuel in pulses into the cylinders. The other key change was the addition of charge-air cooling, which provided cool dense air to the cylinders, helping generate the new engine’s increased power, torque and improved emissions. These advances also pushed service limits to every 160,000 kilometres or more.

But despite these improvements, diesels continued to change and – if you missed it – it all had to do with the environment. New emissions regulations in 2004 and 2006 called for much stricter control of NOx and particulate matter emissions; and meeting these targets, interestingly, has made for cleaner and better engines.

First a closed-crankcase ventilation system was added to meet 2004 emissions targets – but in anticipation of hitting the upcoming 2006-model requirements this closed crankcase ventilation system captured harmful vapours internally and burned them as part of the combustion process, rather than venting to the outside atmosphere. By 2006 the Duramax was fitted with a new particulate filter system that reduced soot by 90% and also NOx emissions by 50%. The only downside to this tech bonanza is that fuel consumption has worsened.

Big Changes
Major changes to the Heavy Duty Sierra and Silverado came about in 2008 when the newest generation took on the new look introduced in ’07 for the latest version of GMs half-ton pickups. But in addition to the new family-inclusive sheet metal the 2500- and 3500-series trucks also got new interior packages as well as some unique grille, trim, hood and quarter panel work that set them apart from the light duty models.

Tow ratings have also increased with the advent of more engine torque and a beefier frame. The new trucks will tow 5,897 kilograms (conventional trailers) and haul up to 7,575 kilograms of trailer when equipped with a fifth-wheel hitch. New for this generation (and long awaited by the towing set) is an integrated electronic trailer-
brake controller.

Having towed with this integrated trailer-brake controller I can say that it has none of the lag or hesitation that is sometimes found with add-on aftermarket units. Not to mention its placement is flush and easily reached – instead of banging into your knee like the hanging bracket style ones have a habit of doing. In addition the Allison transmission is smooth under load and gear “hunting” is rare. Also this is with a rear axle ratio of 3.73. Others are available – but even with this moderate ratio, power was plentiful and on the highway (at the limit) it kept the revs down around 2,000.

For down grade engine braking the Allison is also set up to hold revs until the accelerator is tapped. And, this combination can hold back a mountain – it’s impressive. You should never have to smell burned brakes again with this setup.

GM says the majority of its 3500-series buyers opt for the Duramax/Allison combination, which by the way adds $8,615 to the cost of the base truck ($54,115).  So, it’s worth noting that the standard engine is the 6-litre Vortec V8 (353 horsepower and 373 foot-pounds of torque) also equipped with a GM six-speed automatic transmission with tow/haul mode. I’ve driven this combination (though not in a 3500) and it is more than capable – so if you anticipate a low number of kilometres driven annually it should be considered.

Probably one of the best results of all the new body changes and engine upgrades is the quiet in the cabin. There is no longer any need to raise your voice to be heard and over long drives the sound from the diesel is pleasant – in fact this truck easily passed the Tim Hortons test. You know, where you see if the server can hear you at the drive-thru microphone without having to shut the engine off.

Other towing items that were on my truck were deluxe wide load mirrors with integrated turn signals ($425); the as mentioned trailer brake controller ($250); an EZ Lift tailgate and tailgate lock set ($125) and the four/seven-pin trailer wiring harness ($55).

Howard Elmer is a truck and ATV writer living in rural Ontario. He wrote this
review for CFI magazine. 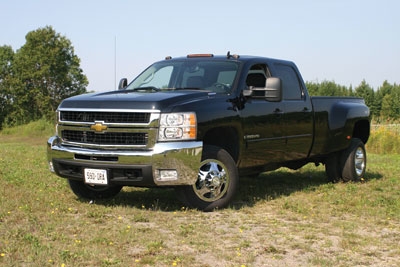 For GM trucks the year 2010 is what’s known as a carryover and that includes the Heavy Duty GM truck segment. And while that means that there are no significant changes to the lineup
Print this page