If the crowd at DEMO International 2012 is any indication of the state of the forestry industry in Canada, then there is a renewed sense of optimism not seen in recent years.

The 29,000-hectare site, in the forest north of Saint Raymond, Que., was filled for three straight days with people from all over the world looking to see the newest products available for the logging, sawmilling and biomass industries.

Over 8,500 visitors toured the 2.6-km DEMO International site to see the newest equipment, technology and innovation available from leading forest equipment manufacturers. That included a large student population that came from local forestry schools, as well as universities in British Columbia, Alberta, Ontario and Quebec.

Close to 100 companies had the latest products on display, both in static and active operations. The active sites provided a unique opportunity to watch live equipment demonstrations as harvesters, skidders, forwarders and chippers tore through the active sites. The active-site companies provided six to eight demonstrations a day, with as many as eight machines working simultaneously to cut through the dense forest in the heart of Gestion Solifor’s La Seigneurie de Perthuis site. Over 100 machines were involved in active site demonstrations throughout the DEMO exhibition area.

Our look back at DEMO International 2012 features some of the new and recent product releases that were on display.

This is just a selection of what products were on display at DEMO, with more information to follow in upcoming issues of Canadian Forest Industries.

Tigercat Unveils Six-wheel Skidder
Tigercat had one of the most active sites at the show, but it was a new product being demonstrated that grabbed a lot of attention. Tigercat brought its first 615C Skidder off the assembly line to DEMO as part of the company’s static display.

The 615C features similar traction and power as the 635C, but provides a lighter option for added versatility in sensitive areas that still demand the control of a six-wheel skidder. The 615C is fitted with a Cummins Tier III engine and includes hydrostatic drive enhancements to help maximize fuel efficiency.

Ponsse Debuts Eight-wheel Harvesters
Ponsse collaborated with Canadian distributor A.L.P.A. Equipment to provide a large active and static equipment area, which featured a new line of eight-wheel harvesters: the Bear, the Ergo and the Fox. The Bear 8w is Ponsse’s heavy-duty eight-wheel harvester, designed for use on the most challenging terrains and slopes. The Ergo is designed for ergonomics and efficiency, offering an alternative to the heavy-duty Bear for working in difficult conditions. The Fox, Ponsse’s newest machine built for thinning operations, is designed for accuracy while also reducing the impact of soft ground conditions.

In addition to the new harvesters, Ponsse’s fleet of machines also included the Buffalo forwarder, a machine that was tested in Canada for two years before being released internationally.

Prinoth Raptor Rips Through the Forest
The Prinoth Raptor 800 grabbed a lot of attention at DEMO 2012, as visitors watched the new heavy-duty forestry mulcher rip through trees on the active site.  The Raptor is powered by a Cat C18 turbodiesel engine, and weighs in at 25,000 kg. The Raptor is designed to tackle heavy-duty land clearing, vegetation control, and forestry management.

CBI Demonstrates Heavy-duty Chippers
Continental Biomass Industries used DEMO 2012 to show off their newest portable and heavy-duty chipping equipment. The ChipMax 484 is a portable chipper that is able to produce high quality fuel chips in sizes from 2-25 mm due to the 2-Knife and 4-Knife Chipping Rotor options. The pivoting discharge chute allows for easier loading for both top- or end-loading trailers. It also comes with PT Tech PTO and hydraulic engagement that replaces the need for a clutch. For heavy-duty whole tree chipping, CBI’s new integrated, high-capacity chipping and flailing system features the Magnum 754 Disc Chipper and Flail 604 debarker/delimber. The system is built specifically for logging contractors looking to produce chips ranging from 3/8 of an inch to one inch, and has a maximum capacity of 150 t/hr.

Deere’s New Undercarriage Provides Stability
John Deere had an array of harvesters and forwarders working in the woods at DEMO, but also introduced the new undercarriage for its line of tracked harvesters. To demonstrate the new U7 in the forest, Deere used the 753JH. On the 753JH, the addition of the U7 heavy-duty undercarriage added 11 inches and 5,000 pounds over the 753JH’s standard undercarriage. That allows operators to have a bigger footprint in the forest, allowing further stability in rugged terrain. As a result, the U7 undercarriage delivers 13 per cent more tractive effort than the standard U6 undercarriage.

LogMax Harvesting Heads Cut Multiple Sites
LogMax had both active and static displays of their harvesting heads at its own site at DEMO, but the company had an active role on several other sites at the show as well. Liebherr used the 6000B harvesting head mounted on its 924 hydraulic excavator, while at the Tigercat site, the LogMax 7000XT was ripping through the forest while mounted on the H845C used for clear fell harvesting. The 7000XT is specially designed for tracked carriers in extreme CTL operations, while the 6000B is a lightweight head appropriate for final felling.

Cat Shows off New Equipment and Technology
Cat provided one of the largest equipment showcases at DEMO 2012. The company’s active demonstrations included the Cat 501HD, a recent addition to its fleet of track harvesters. The 501 HD is a lightweight tracked harvester that provides versatility in rugged job site conditions. The 501 HD features a standard boom length of 23 ft., 3 in., with an optional 27 ft. telescoping V bottom harvester boom.

FPInnovations Unveils Lightweight Stakes
Understanding that many steel forestry trailers currently on the market are nearing their optimized tare weight, FPInnovations has created a lightweight composite trailer stake. The stakes are more flexible but more resilient than steel stakes, are promoted as being 1.25 times higher strength than steel stakes, and reduce the trailer’s tare weight by 450 kg. The composite stakes have been developed in partnership with Deloupe, Mat-Comp, and Pulltrall, and are expected to be widely available in the Canadian forest marketplace in the coming months.

Designed to withstand the harsh weather conditions of the north, the 18-tonne 10F Titan has an expandable load bay and a hydraulic tail section. The combination of the TOC system and an Agco Sisu engine help to provide quality fuel efficiency despite its large capacity. The 10F Titan also renews Logset’s focus of providing operators with minimal obstructed views from the cabin.

Silvana Promotes Bracke, Markusson Products
The Combimatic is the newest saw chain sharpener available from Markusson, one of several companies whose products are carried by Silvana. The Combimatic is a fully automatic sharpener for ¾-in. harvester chains, but it can also sharpen 3/8-in., 404 and 0.325 chains. The system is set up for easy grinding operation and can be powered by a 12V DC or 110V AC current with converter.

Also from Silvana comes the Bracke C16.b silviculture and biomass head. Featuring an open saw box for easy maintenance, the head is ideal for cleaning and thinning applications, as well as clearing along roadsides and
power lines.

Rottne Launches SP’s New Harvester Head
Rottne Canada used DEMO for the introduction of the SP 861 LF Harvester Head. The 861 LF is designed for 20-25-tonne excavator carriers as well as medium to large purpose-built tracked harvesters. The harvester is ideal for cutting tree sizes of 25-55 cm. The LF standards provide minimum friction during felling, resulting in increased productivity and low energy consumption. A topping saw as well as specially designed processor knives are available options for the SP 861 LF. The SP 861 LF will be available in the Canadian market in early 2013.

Waratah Active in the Forest at DEMO
Waratah had an active role in helping clear the forest on the John Deere site at DEMO 2012.  The Waratah H480C used on the Deere 753JH has four fully synchronized feed rollers along with five delimbing knives to effectively process difficult stems into clean log lengths. The Waratah HTH623C was used on Deere’s 2454D Swing Machine. The HTH623C provides up to 11,600 pounds of feed force and delimbing power, and features enhanced control with the TimberRite
automation system.

Komatsu Harvesters and Forwarders
Komatsu was active in the forest at DEMO with its 931.1 harvester. Featuring an iT4 engine, the 931.1 is built to have a reduced environmental footprint while still providing the power and versatility needed to work in dense forest conditions.

The 931.1 features the CRH 22 boom, making for easier manoeuvrability and even greater precision at the end of its reach. It also comes with the MaxiXplorer control system with customized software for optimal reporting and productivity. The 840.4 forwarder was also prominent on the SMS Equipment/Komatsu site, providing an all-around option for loggers working in variable conditions.

Liebherr Excavators Clear the Forest
Liebherr demonstrated the strength of its lineup of crawler excavators in their exhibition area at DEMO. The forestry model of the Liebherr 924 tracked excavator used the LogMax 6000B harvesting head to handle the steep terrain and cut through Liebherr’s demonstration site. The 924 is designed with a new maintenance concept for improved productivity, and a new cab design for enhanced operator comfort. Working in tandem with the 924 was the 317 Litronic crawler excavator fitted with a Rotobec grapple.

Vermeer’s Newest Grinders and Chippers
The HG6000TX Horiontal Grinder and WC2300 Whole Tree Chipper were the newest members of the Vermeer Canada product lineup shown off at DEMO International. The HG6000TX includes the exclusive Vermeer SmartGrind system, which provides automatic control of the grinding speed based on engine RPM’s. It also includes a wireless remote system that allows it to be controlled from up to 300 feet away. The WC2300 is designed for producing high-quality chips for the biomass industry. It features two knife options, double-edged or babbitted single-edge cutter knives, to meet individual operator demands.

Rotobec Grapples with Work on Multiple Sites
Rotobec products were hard at work on multiple sites at DEMO International. At their home site, Rotobec provided a unique demonstration using their Elite series loader and grapple to stack a variety of materials, including standard logs and pop cans. Rotobec’s line of grapples were put to work at the Sennebogen site, moving stacks of pre-cut wood while attached to Sennebogen’s 825 and 830 Green Line material handlers.

Rotobec was also part of the CBI demonstration, with their grapple featured on the Flail 604 debarker/delimber.

Deloupe Unveils GO! Concept
Deloupe unveiled its project called Concept GO. The backbone of this innovation consists of columns and bracket that allow logs to be easily moved by the user to meet different conditions of transport and delivery. According to the company, the possible configurations are virtually limitless and allow users to carry - and deliver - all lengths of wood, of any size with a single trailer. It was this portion of the concept will was unveiled at Demo 2012. The trailer promises to be at least five per cent lighter than Deloupe’s flagship Viking model. The Concept GO! is currently being tested and should be available in the second quarter of 2013. 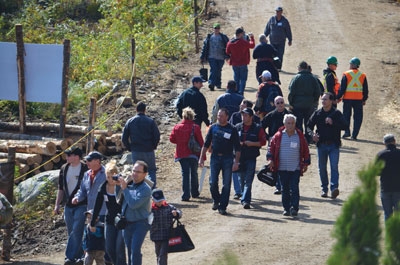