Scierie Dion invested $15 million in its own mill to saw both hardwoods and softwoods on the same line. 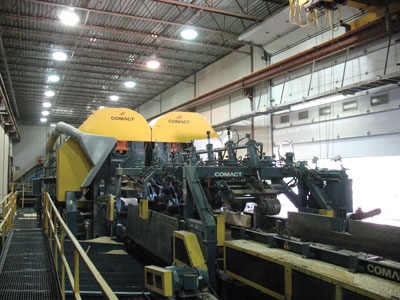 Above: The additional supply of softwood sawmill allowed Dion to invest $11 million in 2010 in this new sawing line. Downstream processing is via a Comact TBL3 curve sawing gang. Photos: Alain Castonguay Scierie Dion invested $15 million in its own mill to saw both hardwoods and softwoods on the same line.

The Portneuf region of Quebec was not spared what is known locally as the province’s “forestry crisis.” Located among the picturesque mountains just northwest of Quebec City, the region’s centre is Saint-Raymond. The town of 10,000 survives on forestry and a smattering of tourism centered on hunting, fishing and snowmobiling.

Since 2007, forestry has played a declining role in the town. A major employer, the AbitibiBowater softwood sawmill, shut its doors in 2008, unable to compete at rock-bottom commodity prices given its relatively low production volumes. In April 2010, the provincial Minister of Natural Resources and Wildlife (MRNF), Nathalie Normandeau, transfered its softwood volume to three family-run mills: Scierie Dion & Son, PSE Sawmills (formerly Savard & Son) of Saint Ubalde, and Eloi Moisan of St. Gilbert.

Hardwood volumes were concentrated in Saint-Raymond, as Dion was already a major player in that market. The Moisan mill took the tamarack (larch) volumes to supply the landscaping and patio market, while Dion and PSE split the softwood allocation. Scierie Dion currently runs the two types of wood in roughly equal volumes, with a little more than a third of its overall volumes coming off Crown land. The region has a very active private wood supply, much of it coming off large industrial parcels.

New Softwood Line
Sawing softwood lumber is not entirely new to Scierie Dion, as roughly 10% of its output has traditionally been softwood. Yet when it acquired the harvesting rights and assets of the neighbouring AbitibiBowater single-line mill, that volume increased five-fold overnight.

AbitibiBowater and the previous owners had invested in some new technology in the mill in the years leading up to the closure, but in the end the only equipment Dion recovered for its own softwood production was the USNR/Forano debarker, explains Jean-François Dion.

“Of course, we could have simply restarted the sawmill, but AbitibiBowater had closed it for a reason – it was not profitable on the available log diet. It would have required substantial investment in equipment to do it right, and optimize it for today’s market,” he adds.

While Scierie Dion had been sawing softwood for some time, “we were not effective,” Jean-François admits. He adds that they also lacked sufficient hardwood volume to run as a fully optimized hardwood mill.

“We could not find enough hardwood to maximize its facilities. Even upgrading our facilities to convert to small-diameter hardwood small  was not an option. There were weeks where we would have been twiddling our thumbs waiting for wood in the millyard if we tried that aproach. Given the available volumes, we could not invest in two plants that would continue to run at half speed. It seemed more logical to run one, but to full capacity. We took the one that was still running, that we were used to, albeit for hardwood sawing, and adapted it to handle softwood as well.”

In the end, the only way they could find a reasonable ROI on the investment needed was to make sure they were running all year.

“We had to work on two shifts, 12 months a year. According to Jean-François, alternating between hardwood and softwood runs, they have enough volume at a reasonable price.

For example, in the spring the plant cut hardwood for three weeks, before moving back to softwood for two. The conversion to allow a single line to handle both chiefly involved Comact technology, but also involved Fabmec for installation and ÉlectroBeauce and Gilles Paradis Enterprises for electrical work.

The main goal of the project was to boost production by sawing more softwood, but to do so without adding another edger. The line is a Comact OLI-CS3 with twin band saw and profiling tools for primary breakdown, and a TBL3 curve sawing gang edger, also with profiling, for secondary breakdown. Primary log positioning includes rotation and position verification and real-time adjustments on the fly.

According to Comact, some of the modifications for this application at Scierie Dion include the use of conical canter heads designed specifically for Dion’s mill, profiling modules on both primary and secondary breakdown to avoid additional edging, and controlled curve sawing on secondary breakdown.

Teamwork
The new approach also involves working with other area companies more as partners than competitors, a move that allows everyone to survive. The mill switches production according to demand and season so that prime logs do not lose value in the mill yard. May to September is not conducive to hardwood harvesting, for instance, and the mill takes care to move any inventory through the mill as soon as possible to avoid downgrading.

“We also consider the needs of the PG Flooring mill we supply. At times cherry is a priority, and after that, maybe it’s maple sugar, so we work together,” says Jean-François

Almost all hardwood boards go to this flooring plant in nearby Saint-Edouard-de-Lotbinière. Gestion Dion & Bros., the family holding company, is a 20 per cent partner in the company, and this past June the powerful union investment fund, Fonds de solidarité FTQ, invested $2 million in PG Flooring. In 2010, the Fonds de solidarité FTQ also provided funding to Scierie Dion for its investment in the new sawing line.

In addition to its private woodlots, the Dion family also owns 20 per cent of Solifor Perthuis, owner of the local Perthuis Seigneury and host of DEMO International 2012, the live logging show held Sept. 20-22 (see page 22 and www.woodbusiness.ca for full reports and video of the event). This large network of private forests totalling 286.5 km2 (28,650 hectares) originally belonged to AbitibiBowater. Solifor, a partnership created by the Fonds de solidarité FTQ in 2005, bought the land in February 2009 along with two other holdings, the seigneuries of Lake Métis and Nicolas-Riou, part of  the Bas-Saint-Laurent model forest southeast of Quebec City.

In 2007, Jean-François asked an AbitibiBowater executive if the Perthuis holding was for sale. “Never, it is the jewel of the company!” was the answer, but eventually financial challenges forced the paper company to reconsider.
Jean-François adds that the mill modernization was in large part made possible through a financial bridge offered by the National Bank of Canada (NLC).

“Before the mill was restarted in earnest in the fall of 2010, we had an inventory of 100,000 m3 in the yard we had to carry, because we wanted to have enough wood for the new line. The president of the National Bank, Louis Vachon himself, came to visit the facilities in Saint-Raymond.

“I find it interesting the number of Quebec partners that work to help the forestry sector stay locally owned and successful,” says Jean-François.

New Gear
To handle the extra softwood, Scierie Dion invested $11 million for new equipment and installation costs. The centrepiece is a new sawing line from Comact, but other recent investments include the addition of a McDonough transverse sharp chain infeed table for the mill’s board edger. They also added a McDonough hook stop transfer chain through their scanner, a move designed to incraese the log fill rate.

With the new line running well, the company took advantage of the 2012 summer shutdown to install a new trimmer to manage the increased flow, a Comact TrimExpert line. An investment of more than $4 million, the new trimmer system scans the boards on each side for the optimum trim or re-saw solutions, using different sets of parameters depending on species and products for both hardwoods and softwoods. The technology was already running in a number of softwood mills, as well as a hardwood mill in New Brunswick. This is the first time it has been merged to handle both in one line.

Market Shifts
“We’d rather deal with low selling prices than have to stop production because we’ve run out of wood,” is how Jean-François Dion explains the decision in 2010 to increase production capacity by adding a new line capable of handling softwood as well as hardwood. Still, he admits that the business context remains difficult. The lumber market collapse following the mortgage and housing crises in the United States in 2007 has turned softwood markets ugly. The closure of area paper mills has reduced or complicated chip markets.

Nor has the hardwood market, once a higher-margin sector, fared much better. The housing crisis and a rash of cheap imports has also undermined the North American furniture market, which bought the higher-quality boards Dion once produced. Unlike the softwood market, Dion does not expect that to change any time soon.

“This industry will not recover here. The impact for us is that the demand for the best cuts has dropped considerably. “Select & Better” allowed us a fairly diversified commodity basket and a relatively high average income. That is all but finished,” he says. Scierie Dion’s customers in 2012 are not at all the same as those in 1993. The prices for high end maple or yellow birch have fallen sharply in recent years, changing the way even hardwoods must be sawn. Production and unit costs are now more important factors.

So why continue to invest, despite the challenges?

“I am 39 years old, my brother 36. We have always worked in this industry. There is no doubt that achieving decent margins is now more difficult than ever, but when you see others in the industry fall in battle, it makes you want to continue all the more. And we still think there’s a future. There are fewer people in the market, wood continues to grow. If we stop sawing wood here in Saint-Raymond, it will be done elsewhere.”