To show off the work ethic of the 2011 Ford Super Duty the company rented a working quarry for the day down in Arizona.  Prior to getting to the open pit operation I had several hours to tow varying loads on the desert floor; but probably more importantly I towed those trailers on grades of 6 and 8% climbing the switchbacks of the mountains that border the Grand Canyon. 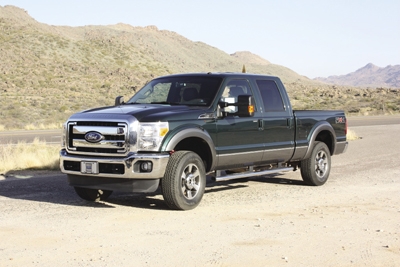 I drove F250s with trailers weighing around 5,000 kg and then an F450 with a 45-foot gooseneck trailer loaded down with a gross weight of 10,500 kg. Both these trucks featured the new 6.7L diesel coupled to an all-new six-speed automatic transmission as well. Pulling up a 6% grade over several kilometres, I found the truck didn’t drop below fourth gear and easily handled the weights. On the way back down, the new integrated exhaust brake along with the engine braking of the transmission held the combinations to 40 km/h without touching the brake pedal.  This powertrain combination is the first reason you’ll want to check out the new Super Duty. But, another is the first-ever ordered-from-the-factory fifth wheel hitch that also features a removable gooseneck ball. This is what I used to tow trailers in Arizona and it was fine.

Finally! We have a truck manufacturer doing it all –Hitches, trailering mirrors, integrated brake controller and electronic trailer sway controls – Ford now offers the whole package – good on them.

Built by Ford
This newest Power Stroke diesel engine is by Ford and built by Ford: a first in all respects. But it’s also the first departure from a relationship that Ford has had with International of Indianapolis – who for over 30 years built all its diesel engines – the last one being the current 6.4L Power Stroke.

So, what? Well, if you have a current 6.4L you know that the engine is tight but the fuel economy isn’t great. Ford is aware of this and that’s why with this introduction that issue had to be front and centre.

Unfortunately, the reasons for the decline in fuel economy on the 6.4L had much to do with the implementation of new environmental devices to clean up the diesel exhaust over the past two years; a job International accomplished but with this serious side effect.

That said, here is how the new diesel did.  Driving the new 6.7L engine through the flat Arizona desert, and through the switchbacks of the mountains I achieved 23 miles to the US gallon even with all the emissions gadgets in place. Also I had a 1,000 lb of cement in the bed and four adults in the cabin (but no trailer). That number converts to 10.25L per 100/km combined – and that is my personal un-doctored number, not Ford’s.  That’s around 10 miles to the gallon (US) or 11 litres per 100 km better than the ’09s I tested just last summer. 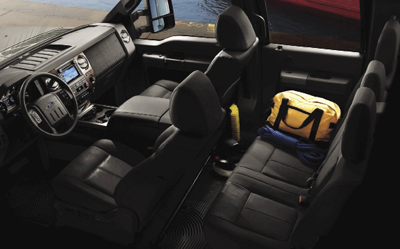 But fuel economy is just one aspect of this new design. What this 6.7L V8 turbocharged diesel engine also brings to the Super Duty equation is a staggering 735 lb-ft. of torque and 390 hp as well.  And as to how this power is to be used – Ford is claiming new towing weights of 11,068 kg and a payload of 2,958 kg.

The new engine architecture is also easier to service – for example, the body/cab no longer has to be removed from the frame to access the turbo; also, the high-pressure fuel pump, EGR (exhaust gas recirculation) components and thermostats are directly accessible from the front of the vehicle.

If there is a downside to the new diesel it is going to be the price. The premium for the 6.7L is just shy of $10,000 over the price of the standard gas engine (which incidentally is also new – the 6.2L V8, which replaces the outgoing V10).

Gasoline Engine
That extra cost is certainly a good reason to have a closer look at the makeup of this new gas engine – which itself is no slouch when faced with towing trailers. Key features of the new 6.2L V-8 gasoline engine include:

This engine makes 411 hp and 434 lb-ft. of torque. A very respectable powerplant – and while it won’t pull on the hills like the diesel – hey, it’s a lot cheaper.

In addition to increased towing and payload (and improved fuel economy) this new Super Duty also benefits from improved ride, handling and steering.  I found the on-road performance quiet, with a firm road feel and very reasonable suspension feel, even when empty. And this is exactly what the engineering team worked on, particularly the leaf springs and spring rate, as well as adjusting the internal valving in all the shock absorbers. The steering gear also is new, improving precision and giving a better on-centre steering feel by adjusting the steering gear symmetry.

Interiors, which since first getting a huge remake in ’04, continue to be excellent. Borrowing a few items from the revamped ’09 F150 the Super Duty can go from being work-ready plain to fully tricked out leather and chrome. But apart from being pleasant to look at, much of what is going on in the interior of these trucks is all about business.

Inside, customers will benefit from a flow-through console that improves the functions of the truck.  Storage space is increased about 60% and with at least 70 different configurations possible.  A 12V power point is available at the rear of the console and another is inside the main bin, which is large enough for two laptops and is lockable.  An 110V power inverter is standard and provides enough juice to run that laptop and a printer. 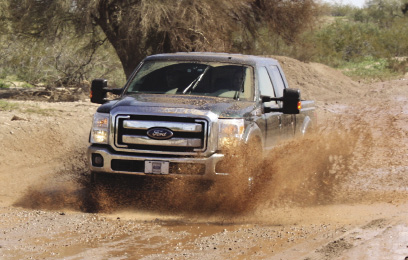 And for many customers, this Super Duty cab may also be a mobile office: Ford Work Solutions offers the
technology to stay connected with the home office or job site and even tracks tools.  To that end there is a new 4.2-in. LCD Productivity Screen and an off-road message centre as well; and it can all be run off a five-way button on the
steering wheel.