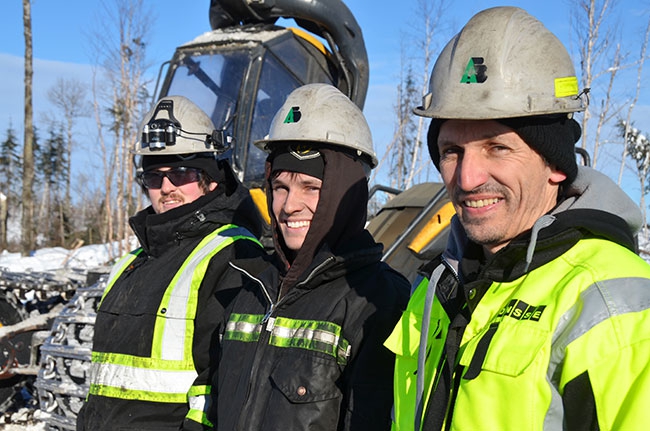 Upon my arrival in the forest about 50 kilometers north of Saint-Thomas-Didyme, Que., the team of Forest Marcel Tremblay and Son was just finishing up a harvesting operation. I could see the winds of change blowing through Bertrand Tremblay’s team. The average age of its 12 employees is barely 30.

“The oldest is me, and I’m 54-years-old,” says Bertrand Tremblay, who is all smiles. He took over from his father Marcel in 1990.

In the service truck, I met Mathieu Tremblay, 28, who began working with his father eight years ago. Later, I met Francis Tremblay, 25, who piloted the first Ponsse Scorpion harvester delivered to Canada in December 2014. Then, I came across Jeremy Audet, 25, who operates the company’s Ponsse Elephant King forwarder, accompanied by a 29-year-old trainee, Francis Lavoie.

Unlike the grey heads that usually make up forestry operations, I encountered a young gang of foresters who listen to punk rock, while talking about kayaking and extreme sports. The positive working atmosphere of the company convinced Jeremy Audet to go back to work in the forest.

“I wanted to go back to school to change jobs, but when I started working with this team, I told myself that I wanted to work here for the rest of my life,” says the smiling, long-haired young man.

While it is sometimes difficult to get your first opportunity to operate a machine that is worth several hundred thousand dollars, Francis Lavoie says he was welcomed with open arms.

“I really feel in my place here,” he says.

Bertrand Tremblay sees the future of the family business being secured through building a strong, competent younger team.

“More and more forest workers are retiring,” he says. “We must train young people and operators that are emerging entrepreneurs.”

That is why he quickly trusted two of his sons that joined the team before turning 20. His third son, Simon, will join the ranks in two years. Matthew and Francis spoke of the work opportunities in forestry to their friends, thus attracting other good, young operators.

Bertrand Tremblay has put a great deal of effort into having the latest equipment available that is easy to maintain. Within two years, he has invested more than $2 million in new Ponsse machines, by acquiring two harvesters, a Fox and a Scorpion, an Elephant King forwarder (2016 model) and two H7 harvester heads. These machines were added to his existing fleet, which includes John Deere Timberjack 753 and 608 harvesters (both with a head H7), and the three forwarders that the company was already operating – an Elephant King 2012, a Ponsse Elephant and a Timberjack 1710.

While the investment in new machines will reduce the amount of maintenance required for the fleet, it also helps to attract the best operators.

“The youth’s passion is to log and get into the woods, not to be mechanics,” says Bertrand.

Course rollercoaster
Although the business is currently running well, that was not always the case. In 2014, Bertrand and his brother Dany had lost large contracts with Resolute Forest Products.

Fortunately, the new auctioning system has created opportunities for entrepreneurs. Instead of being deterred, Bertrand found good harvesting contracts with André Bernier Entrepreneur Forestier, based in Dolbeau-Mistassini, Que.

While his brother Dany resumed logging for Resolute, Bertrand was first placed two fellers with André Bernier, who a few months later, asked if he could pick up the pace to harvest 50,000 m3 in just a couple of months. Bertrand took the opportunity to increase the harvesting operation with the purchase of a new Ponsse Scorpion harvester he took possession of in December 2014.

This purchase made his sons, Francis and Mathieu, extremely happy. They love their new toy.

“There is so much technology in there, that it may look scary for operators who do not understand it. But it is a machine that has no end,” says Mathieu, who was the first to operate the Scorpion.

For Rémi Parent, cutting supervisor for André Bernier Entrepreneur Forestier, working with a team like Bertrand Tremblay allows him to better plan the harvest.

In retrospect, Bertrand Tremblay is pleased with the turn of events stemming from 2014.

“Nothing happens for no reason in life,” he says, pleased with the choices he made and freedom he has acquired.

The freedom to manage his business and invest when conditions are favourable is what stimulates Bertrand Tremblay today. In fact, Bertrand, who began working in the forest at the age of 19, is an entrepreneur and an operator.

“There have been difficult times when I thought about going back to school. But once I became owner, I felt in my place. It allowed me to invest in machinery and to see further. It is the pleasure of working for yourself and to manage your own affairs,” he says.

Although he thought about retiring at the age of 50, Bertrand continues to work with pleasure, on the one hand, because business is good, and secondly, in order to leave a healthy business to his sons.

“If we do not move forward, we fall back. We need to always keep looking forward and moving forward, taking controlled risks. In 10 or 20 years, I want my boys to continue to evolve and advance. That’s what I try to teach them, “he says.

Not just for money. But also for fun and passion to work together as a family.

“Unity is strength, and I want my guys to succeed together,” says Bertrand.