May 17, 2017 - Gary and Darren Thomas are third generation loggers who have worked in the bush for practically their entire lives. Hailing from Pelican Lake First Nation near Leoville, Saskatchewan, the brothers grew up hunting and fishing around Chitek Lake and started working in the bush when they were still kids. Both father and grandfather made a living in the bush and the boys were line skidding full time by the time they were in their early teens. “Logging was something that we always liked,” says Gary. “We started full time in the bush at thirteen.”

However, it is a long way from chainsaws and cable skidders to a modern, high production stump to dump operation . In between is a story of hard work, perseverance and a continual striving for excellence in the profession.

Gary explains that he purchased his own cable skidder at age 16, modeling after his father, Calvin who had the same line skidding business model. Father and son worked this way for several years until local regulations began to change in Saskatchewan and cable skidders were phased out. Gary and his father sold each of their cable machines and pooled their resources to purchase a grapple skidder.

Agency Chiefs Tribal Council is a legally incorporated body comprised of three Indian Bands, Big River, Pelican Lake and Witchekan Lake. Its mandate is to contribute to the human, economic and social well-being of its members. One of the Council’s departments is AC Forestry.

AC Forestry is in turn one of eight shareholders that owns Sakâw Askiy Management Inc. This entity was formed to jointly assume the Forest Management Agreement (FMA) and its management responsibilities. The FMA was previously held in large part by Weyerhaeuser which owned and operated the Prince Albert pulp and paper mill – shuttered in early 2006 due to poor market conditions. The Sakâw shareholders include First Nations and forest companies own processing facilities in Saskatchewan. They bring to the table a proven track record in business and sustainable forest management, along with the traditional knowledge of the First Nations.

Planning, harvesting, hauling and renewal operations are carried out by each of the shareholders within specifi c operating zones in the FMA. The business leaves local decisions to those with the local knowledge while providing coordinated oversight at the FMA level (Sakâw).

The Thomas family became a skidder subcontractor under AC Forestry in the nineties and continued until the Weyerhaeuser closure that left AC Forestry with virtually no harvest contract. Always the entrepreneurs, the family got into the food concession business, travelling to local Pow Wows. This period marks a rare departure from logging for Gary and Darren. “We always tip waitresses well. It is hard work being on your feet or in the kitchen all day,” says Gary speaking from experience.

In November 2010 Sakâw Askiy Management Inc. acquired the Prince Albert Forest Management Agreement from Weyerhaeuser Canada on behalf of its eight member companies. AC Forestry ended up with an annual cut of around 700 000 cubic metres. The brothers returned to AC Forestry, this time as employees. They did a fi ve-year stint – with Gary operating feller buncher and Darren on a processor. The brothers always believed in their own abilities, work ethic and high production output, so, in the back of Gary’s mind, he knew that he wanted a contract of his own.

“They were always asking for contractors, so I just went in and asked for it,” Gary recounts. “A lot of guys said they won’t let us leave and have our own contract because they wouldn’t want to lose two of their best workers.” But now two years into the contract, Thomas Logging is producing well for AC Forestry and the new arrangement is turning out to be the proverbial win-win. The enterprise is owned by Gary, Darren and Calvin with strong support from cousin, Daniel Thomas. “Daniel stayed with us through it all, he is like a brother to us,” says Gary.

Thomas Logging started with a used Tigercat 860 feller buncher and bought back the same grapple skidder that they owned when they subcontracted to AC Forestry fifteen years ago. Chuck Miles, forestry equipment sales specialist for Redhead Equipment stepped in and made them a deal on a new Tigercat H855C harvester paired with a Tigercat 575 head to complete the system. Two months into the first season, Thomas Logging purchased a second identical harvester unit from Redhead.

Now having just finished up their second winter season, the brothers have already relegated the used buncher and skidder to spare machine status. Through Chuck and Redhead, they acquired a new Tigercat 870C feller buncher and a new 630E skidder.

BTB visited in late February with just a couple weeks left before spring break-up. The ground was characterized by steep draws and not a lot of fl at ground for decking. The timber, a mix of varying diameter aspen and spruce. The contract is a stump to dump contract, however loading and hauling is subcontracted out. The 4,8 m (16 ft) aspen goes to Tolko Industries Ltd in Green Lake and the soft wood goes to Norsask Forest Products in Meadow Lake, Saskatchewan, another Indigenous-owned enterprise. “This is hard ground, very hilly. It is tough on the processors and decking. With the processors we were really impressed. It is a good, tough machine. They really stand up,” says Gary.

When asked what it was like to make the adjustment from employee to high production contractor, Gary shrugs. “Nothing too much different. I have always tried to look after things and run the show like a supervisor.” Gary feels that he has naturally progressed into a role of managing people because even as an employee he found himself taking responsibility and really caring about the job and the equipment.

He admits managing people can be a challenge. “It is hard to find good guys but a whole bunch of my family are involved in logging. Everyone but Bob Head and Melvin Gladue are family. So now we have a really good crew, eight guys with low turnover.” When they are camp based, Gary’s girlfriend, Rolanda, runs the kitchen, hauls water and moves fuel tanks for the machines. “Dad runs for parts and does anything else needed to keep the operation going. He is very proud of us. We have a real good team here – everyone works together.”

“Dad lets me run the show,” says Gary. “I do most of the repair work and sometimes we will get Redhead in.” Darren bounces between the skidder and a processor. All the operators do their own daily maintenance. “We want to have guys that care about the equipment like we do. We cut loose an operator that doesn’t look after the machines or doesn’t produce. They don’t work here.”

Chuck Miles from Redhead has spent a lot of time with the Thomas brothers, seeing how they work and watching their rapid progress. “Since they have been in the bush all their lives, they know they need to keep the machines running. So right from the start they set up a fully stocked mobile shop with a hose crimper, fi ttings, a compressor and an inventory of wear parts. When guys start out, sometimes this stuff gets overlooked. They made it a priority when they fi rst started so that they would have the machine availability. They are down for one hour instead of running to town and having a machine being down for half a day. That can kill a new contractor.”

Gary is happy with the relationship with Redhead Equipment as well. “The machines are solid and Redhead has been good.” Tigercat harvesting head customer support specialist, Blain MacDonald has also been integral to the successful start up of the operations working with Thomas Logging and Redhead to ensure the processors were optimally setup and that the operators had the right knowledge out of the gate.

“It is a big investment but it is worth it,” Gary says as he sums it all up. “You can’t really think about how much in debt you are because these machines are going to pay for themselves ten times over. We plan to really look after them and keep them as long as we can.” 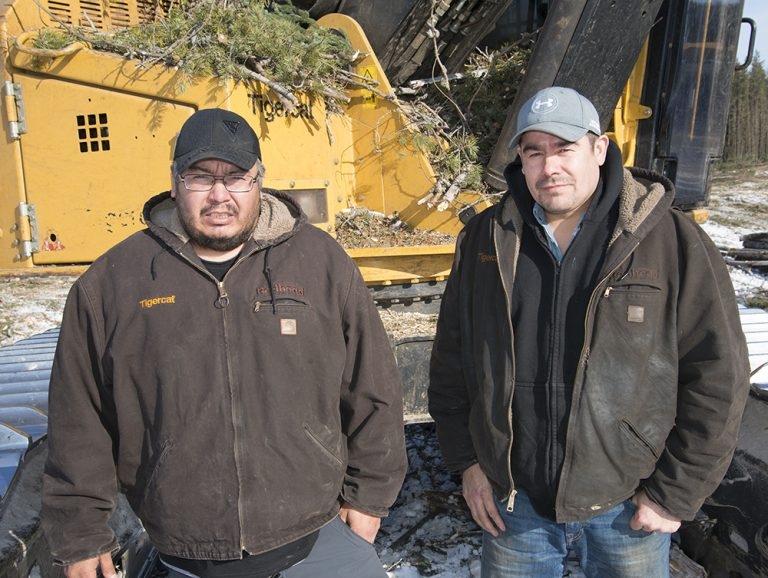 Related
DLind, Teal-Jones Group log steep slopes near Mission
‘We had to rebuild the trust’: How the BC Saw Filers Association got back on track
EACOM’s latest mill acquisition could help it prepare for softwood war
New harvester generates 11 per cent more tractive effort