June 11, 2014 - Driver, fuel, helicopter... flying over single forest cutblocks is expensive! It will soon be possible to make substantial savings through the use of drones, or unmanned aircraft, for specific operations.

“In a way, drones are actually manned; only the pilot stays on the ground and controls the machine remotely,” says Denis Cormier, Research Leader, Silvicultural Operations, at his office at FPInnovations’ headquarters in Pointe-Claire, Que. He is the one leading the tests to evaluate the potential of drones for the forest sector.

His team has already imagined potential applications with this type of machine. “Potential gains lay in situations where you currently use a helicopter to gather data on small areas, you need several repetitive flights for periodic measurements or you carry out tedious, unsafe ground surveys.” The summer of 2014 will be one of sustained testing.

The device used by FPInnovations looks like a small helicopter with four propellers. It can carry a load of 500 g, and its battery allows it to fly non-stop for 50 minutes. Preliminary flight tests were conducted over a woodlot near Vankleek Hill, Ont. Using a large tablet, the pilot sees the forest stands unfold before his eyes as the aircraft soars through the air, filming with its integrated camera.

“The tablet’s screen is split into two,” explains Denis Cormier. “The pilot can see both the sector map that positions the UAV in real time as well as the video images sent directly by the device.”

FPInnovations became interested in drones in 2013 with theoretical discussions and ideas on paper. What is the potential of UAVs for forest operations? What may be their benefits? What are the best applications? Under what circumstances? Currently at the stage of field-testing, Denis Cormier’s team is tackling a complete proof of concept. “We want to achieve the same level of accuracy as conventional applications,” confirms the research leader, “while reducing operating costs and improving the quality of information.”

On the ground, the pilot does not control every movement of the drone. A flight plan is strategically programed beforehand and the machine follows it automatically. The pilot is, however, able to discontinue the flight plan at any time, to circle back and observe something more carefully, and then resume the plan.

Already, the team foresees a wide variety of possible applications. Our imagination could really be the ultimate frontier in this case. Frequent flights over piles of chips in mill yards could help track inventory volumes, and using specific sensors could assist in searching for hot spots on the ground that indicate residual smoldering fires after a prescribed burn. A drone could also be used for timber reconnaissance, to verify the conformity of a cutting area, to assess regeneration in cutblocks, and, if necessary, establish relevant forest management plans. The applications all use one of the UAV’s main advantages: the law allows them to fly lower than manned aircrafts.

A total of 14 missions are planned this summer across Canada to investigate the potential of drones for the forest industry. “It takes up to two weeks per mission,” says Denis Cormier. “This is just enough time to ship the equipment on site, and to set up the team that will lead the test. We want to discover the specifications of each province in terms of using drones and variations in the legislation governing forest operations, but also to know how to set flights to optimize output quality for different acquisition conditions.”

Although very similar, each province has its own set of rules regarding forest operations. In Alberta, for example, the use of herbicides is allowed under certain conditions. The unmanned aircrafts could therefore be used to check for open bodies of water before the spread of herbicides, therefore preventing water contamination. In the province of Québec, where the government is auctioning 25 per cent of public forests each year, operators could make preemptive inventories to evaluate the value of specific cutblocks before bidding on them.

Another promising application: drones equipped with specialized optical sensors for specific areas of the light spectrum could give an idea of ​​the health of a stand by identifying stressed trees. Moreover, the drones will eventually also carry a LiDAR sensor to generate enhanced forest inventory.

All these tests will provide an idea of the potential and limitations of drones. This work is closely monitored by Transport Canada. “At the moment, the use of these devices is subject to strict flight safety rules,” says Denis Cormier. “We not only need a special flight operation certificate from Transport Canada for each mission, the UAV must always be visible from the ground by at least one person on the team, and it must fly below 140 meters and never over populated areas. We also need to demonstrate that we have an emergency plan for all situations.” The fact is that for Transport Canada, civilian drones are so new that issuing permit applications is complicated by the lack of legislative history.

Is buying a drone economical? Not really, or at least, not yet. “The high-end device we use for our tests is manufactured by Aeryon Labs and sells for more than $100,000. The technology is evolving rapidly and I expect that a device with similar features should be available for forest operations in a price range of $40,000 to 50,000 within the next three to five years.” In fact, the development of the UAV market is somewhat blocked by the Americans as the majority of these devices are considered to have military use so they are banned from flying in the U.S.

Denis Cormier believes, however, that this regulation will change soon.  “The change in legislation in the U.S. will make the market for civilian drones explode, especially for farmers. This will allow development and competition, and in turn drive down prices. The devices will also most likely be improved and even easier to use than today.”

For more information, please contact Denis Cormier at 514-782-4539 or denis.cormier@fpinnovations.ca. 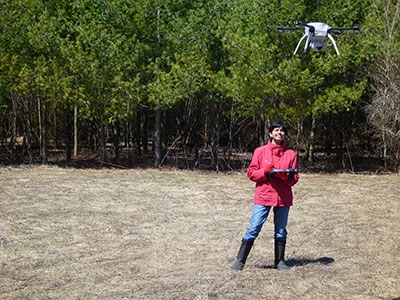