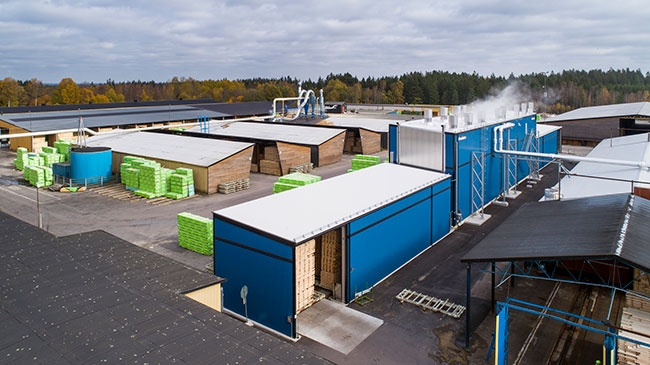 Sawmillers in Canada today have more technology options to consider than ever before for every aspect of an operation. When it comes to kiln drying, batch systems are the more common choice, but there isn’t one application that fits every sawmillers’ needs. Canadian Forest Industries spoke to three suppliers of continuous dry kilns (CDKs) to offer insight for sawmillers trying to decide what would work best.

Alan Robbins is an account representative at USNR, which pioneered the installation of the first North American continuous counter-flow dry kiln system in 2005; Ken McClure is sales manager at Wellons Canada, which has been in the kiln business in Canada for 40 years and supplied the first CDK in Canada in 2013; and Ingo Wallocha is managing director at Valutec Wood Dryers Inc. which has been working with unidirectional (also referred to as progressive) continuous kiln systems in Europe for the last 40 years — it entered the Canadian market about a year-and-a-half ago.

Distinctions
CFI’s discussion with these suppliers revealed the benefits of continuous kilns include:

North American counter-flow continuous kilns do not have doors and water vapour exits at either end. The European-style unidirectional continuous kilns, which are described further below have doors and vents — the vapor exits through the vents just as in a typical batch kiln, where water vapour extracted from the lumber during the drying process exits the kiln through a venting system on the roof of the kiln.

The continuous counter-flow kiln’s difference really is the mixing of green and dry lumber during the process. Green lumber enters the kiln on the same side dry lumber exits. That is why it is called a counter flow kiln and why it cannot have doors.

“Counter-flow continuous kilns are taking advantage of green lumber to moisturize dry lumber and in effect, condition it. Conditioning it evens out the differences of the final moisture content. In other words, it gives them a better standard deviation,” Wallocha explains. “However, this is nothing that can’t be done in a properly designed batch kiln. It’s just that the industry in Canada and in the United States unfortunately is so driven by capacity that many sawmills don’t have time to recondition the lumber in a batch kiln because they want to have the lumber out of the kiln as fast as possible.”

Wallocha says Valutec’s European unidirectional concept combines the flexibility and versatility of batch kilns with the advantages of continuous kilns and has been applied in cold European and Russian climates with about 2,500 continuous kilns sold to date. The kiln will be zoned into various independently controlled drying zones over its length. He described it as a series of batch kilns attached to each other rather than one long continuous kiln.

“The continuous system makes production planning easier because you know that every X hours you have Y amount of lumber coming out of the kiln, ready to go to the planer mill,” Wallocha says. “And that’s why the big mills all want to run continuous kilns for their bulk products and batch kilns for their special products, different lengths and dimensions.”

Wood species for continuous kilns
The Canadian market dries mostly spruce, pine and fir (SPF), but Robbins says all of the sawmills using the continuous approach in the U.S. are drying southern pine.

“We know kilns that are doing timbers, 4x4s, 5/4 decking, 4/4 boards and poles, so it really works on every product,” says Robbins who estimates there are currently about 100 counter-flow systems installed across North America, with 36 of them being either sold or installed by USNR.

Robbins says hardwood isn’t the best continuous kiln option. “Technically it would work, but it would be such a long kiln I believe that it wouldn’t be beneficial,” he says.

Geography no issue
The original North American counter-flow continuous kiln was designed in the southeastern U.S., which has a much milder climate than Canada. But that doesn’t mean a counter-flow kiln can’t run successfully up north.

“There was concern about the use of CDKs in Canada because of winter conditions since a CDK doesn’t have doors on the end,” McClure says.

Wellons Canada has supplied eight CDK projects in Canada and included scope for a CDK system suitable for Canadian winters such as extraction fans on the ends of the energy recovery sections of the CDK to exhaust water vapour as opposed to letting it condense on the slab at the end of the kiln and inevitably freeze. Wellons also heats the slab at the face of the kiln and along the rails.

A recent CDK project for Wellons was at EACOM Timber Corporation’s sawmill operation in Timmins, Ont. Read about that project in the January/February issue or online at www.woodbusiness.ca/mills

“In a traditional kiln, high temp drying is about 20–24 hours. In a continuous kiln the timeframe is close to 36–40 hours,” Robbins says. “I’m talking about dimension lumber, anywhere from 2x4s to 2x12s and the lengths don’t really matter whether it’s 8, 16, 20 or 24. They take somewhere from 36–40 hours in that continuous kiln.”

Robbins says the length of a counter-flow kiln does not extend its drying time; it’s always the same. He says by converting a batch kiln to a counter-flow kiln, and using the same heat source, one could produce 50 per cent more lumber annually.

“If you’re using it 365 days a year in the sawmill, you can use it 98 per cent versus batch kilns which you can only use about 80 per cent because of loading, unloading and other things which are not as efficient as in a continuous kiln,” Wallocha adds.

“You just don’t have as much over-dried and under-dried lumber [in a CDK],” Robbins says. “Moisture gradient is tighter; the standard deviation is better. In a batch kiln, most standard deviations are between three and four. Most mills can do better than four, but you have a hard time getting under three consistently.”

“In a continuous kiln we’ve lowered that down to between two and three. Most people are approaching two on their continuous kiln if they do a good job, pay attention and really work at it, they can get it down closer to two,” Robbins says. “I’ve heard some talk about lower than that.”

Cost-savings
There are opportunities for cost savings as well through reduced energy consumption.

“It’s easier on your heat source,” Robbins says. “It’s kind of an even process where you’re loading and unloading from both ends all the time, not just hurry up and wait that batch systems have.”

He adds that cost-savings would then also come from not overworking equipment from running it hard for a period of time and then leaving it idle until the next batch of lumber enters the kiln. The counter-flow process evens out the heat demand from any source.

Part of that energy savings comes from the North American counter-flow approach — it was developed with a counter-flow design whereby green lumber entering is pre-heated by dried lumber exiting. In a parallel or unidirectional system, the lumber is all going in the same direction. However, given that the latter system includes doors at both ends and heat recovery systems on the vents, there is debate over which system actually provides the best energy savings.

“The retrofit option only exists for the counter-flow kilns so far since our system is just not made for retrofitting old kilns,” Wallocha explains.

He for one likes to see a mix of continuous kilns and batch kilns.

In the end, there’s lots of potential for sawmillers to investigate.